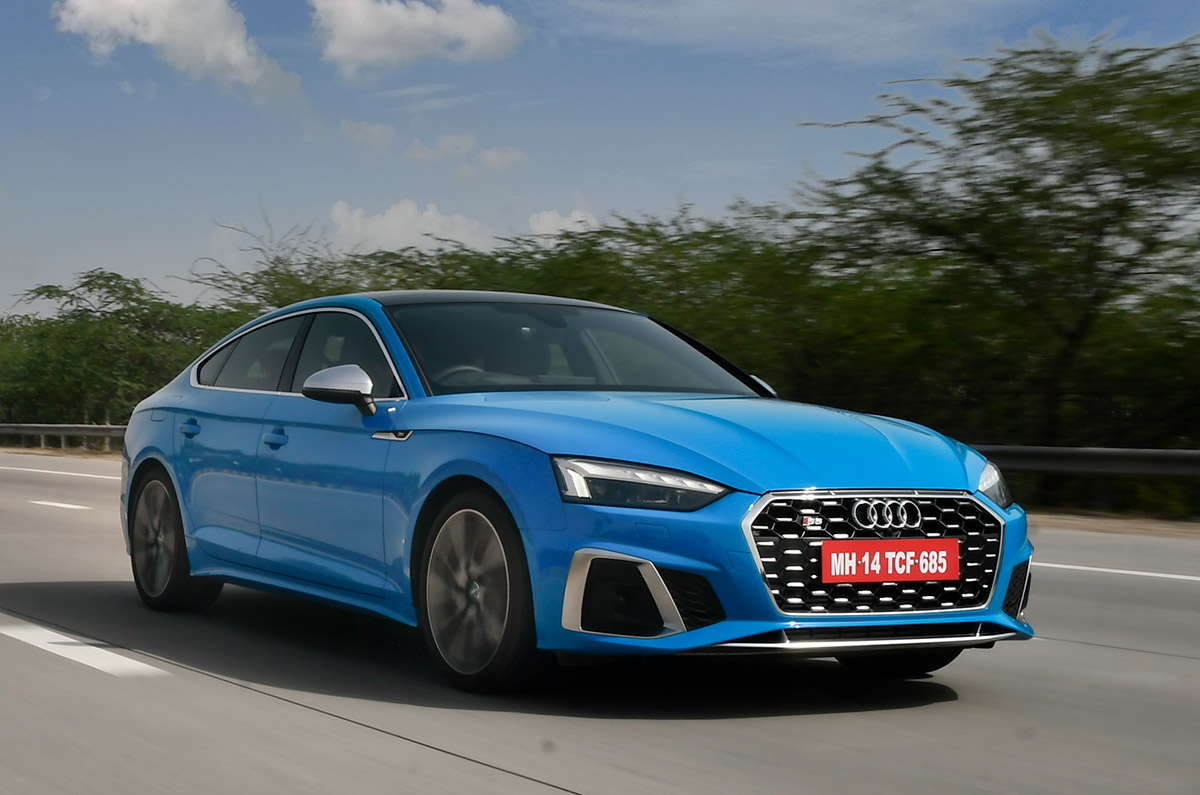 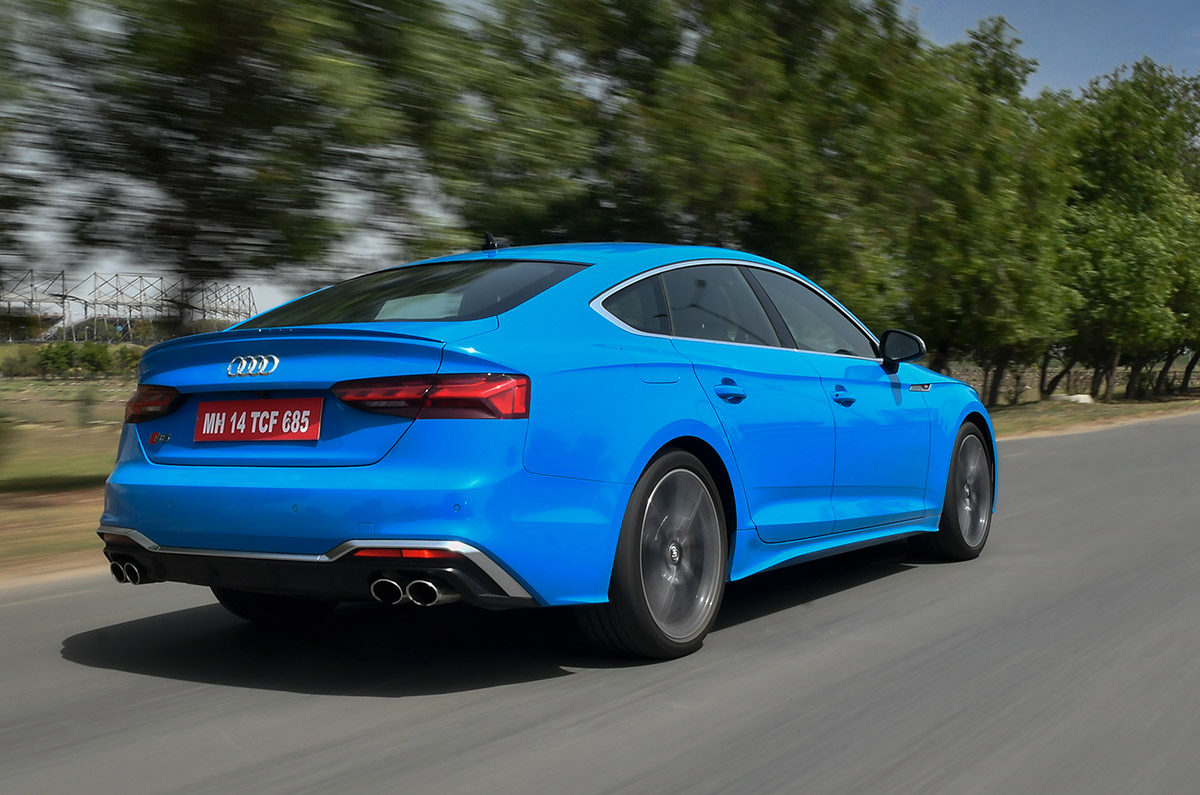 Mid-range performance cars are all the rage these days, especially thanks to the recently launched AMG A 35 sedan and BMW M340i, but you have to remember that it was Audi that introduced this segment to India way back in 2012 with the previous-generation S4 sedan. That was replaced by the first S5 Sportback and then the second-generation car, and though it went off sale for a year while Audi reconsolidated its product portfolio for BS6, it’s now back in this facelifted guise.

It’s amazing how a few small, relatively inexpensive additions to the exterior have transformed the visual character of the S5 Sportback. What was once an understated, elegant sleeper sedan is now more extroverted than ever, almost to the level of Audi’s RS models. This Turbo Blue paint shade is certainly a big contributor, but what also helps are the new LED signatures on the headlamps and tail-lamps, the pointier bumpers with swollen brushed silver accents, and a grille that’s now accented with silver ‘studs’ rather than traditional horizontal slats. 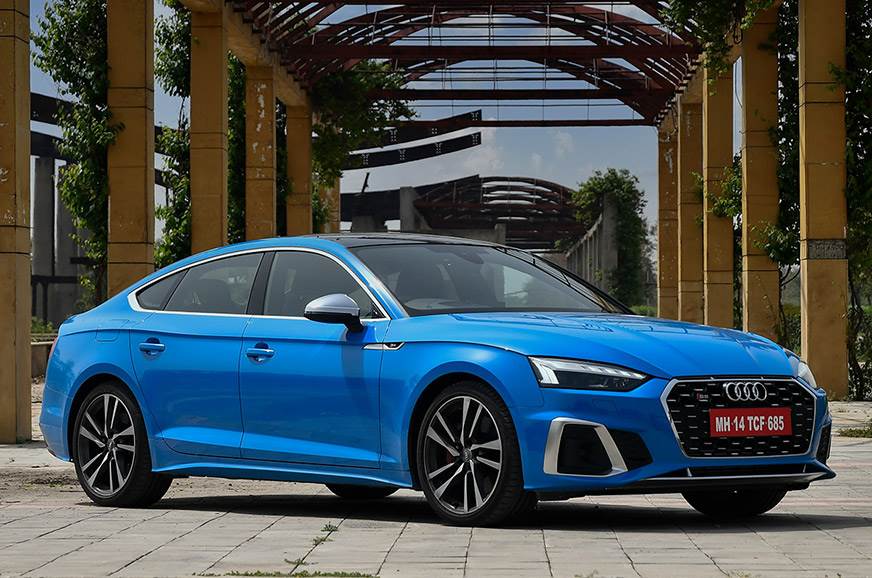 Updated styling brings more aggressive looks to what was an understated sleeper sedan.

Furthering this sporty cause are the aggressive-looking set of five-spoke, 19-inch alloys, a size up on the 18-inchers of before, which fill out the wheel arches nicely, and the S models’ trademark silver wing mirrors and quad tailpipes. Moreover, since this is a CBU import, the ride height hasn’t been raised for India, and what you get is a nice wide stance (the S5’s shape was always inherently muscular) but still enough ground clearance for our roads. 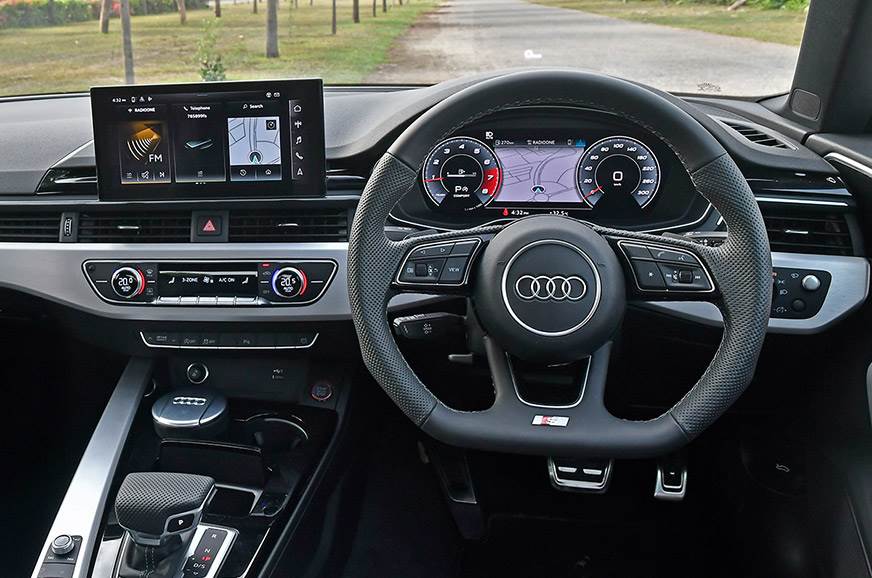 The biggest change on the inside stares you right in the face. As was introduced in the A4, it’s a new, free-standing 10.1-inch infotainment screen – much larger than the old one – and it’s a touchscreen interface now. Gone is the click-wheel controller of old (in its place a new cubbyhole) but thankfully, they haven’t included the dual-screen interface of the new-generation cars, and what you get are traditional knobs and buttons. We always find the lower screen for the AC controls a bit too distracting to use on the move. 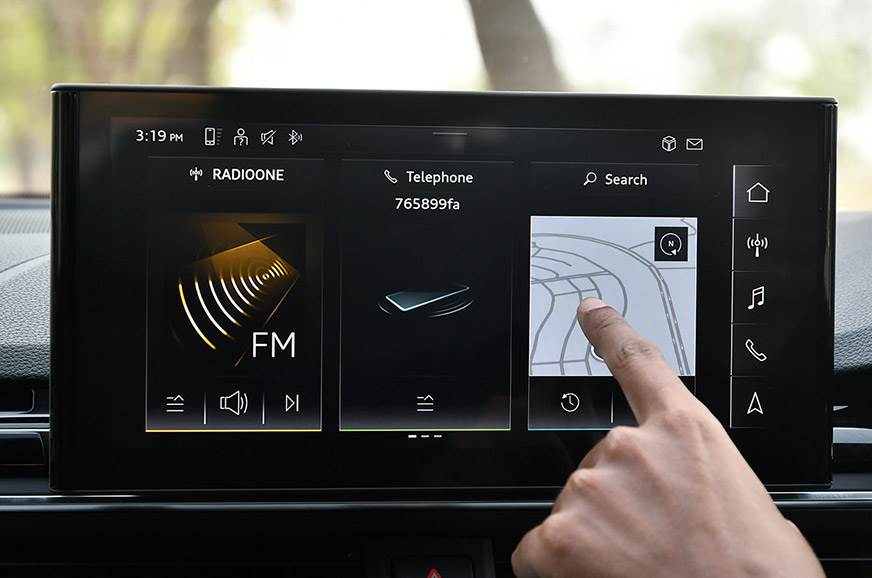 New 10.1-inch touchscreen the biggest change to the cabin.

The dashboard design is shared with the A4 too, and while some might be tempted to pan it for being half a generation old at this point, there’s no denying its clean sophistication. This is enhanced in the S5 by nice brushed aluminium trim appliques contrasted with light grey upholstery. This upholstery is actually a highlight, with Alcantara in the door pads and part-leather, part-Alcantara leather sports seats with a neat texture that all adds to the ‘S’ ambience really well. Quality, ever an Audi highlight, is near impossible to fault. 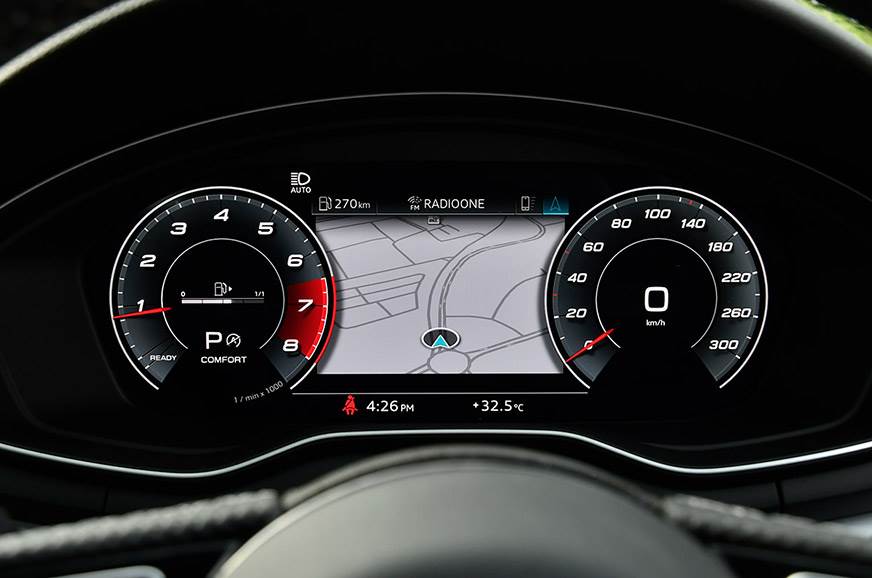 Virtual Cockpit display a generation newer and much crisper.

There is, as before, a flat-bottom ‘S’ steering wheel and Audi Virtual Cockpit digital dials, but this screen-based instrumentation is of the new generation and much crisper looking. On the features front, you’re pretty well covered, with Apple Carplay and Android Auto, three-zone climate control, onboard navigation, a large sunroof and adaptive LED headlamps, although wireless phone charging would not have gone amiss. There are, on top of these, options that you can spec, like a driver heads-up display, a Bang & Olufsen sound system and a parking assistant.

The one thing that hasn’t changed at all is the powertrain, and that’s just as well. The 354hp, 3.0-litre twin-scroll-turbocharged V6 and eight-speed torque-converter automatic are well met, and there is, of course, Quattro AWD with a 40:60 front-to-rear split for the 500Nm of torque. In Dynamic mode, the S5 deploys its performance with the sort of ruthless efficiency we’ve come to expect from sporty Audis, even the ‘lesser’ S models. There’s no launch control, but you can easily shoot it off the line ferociously enough to achieve the claimed 4.8sec 0-100 time. 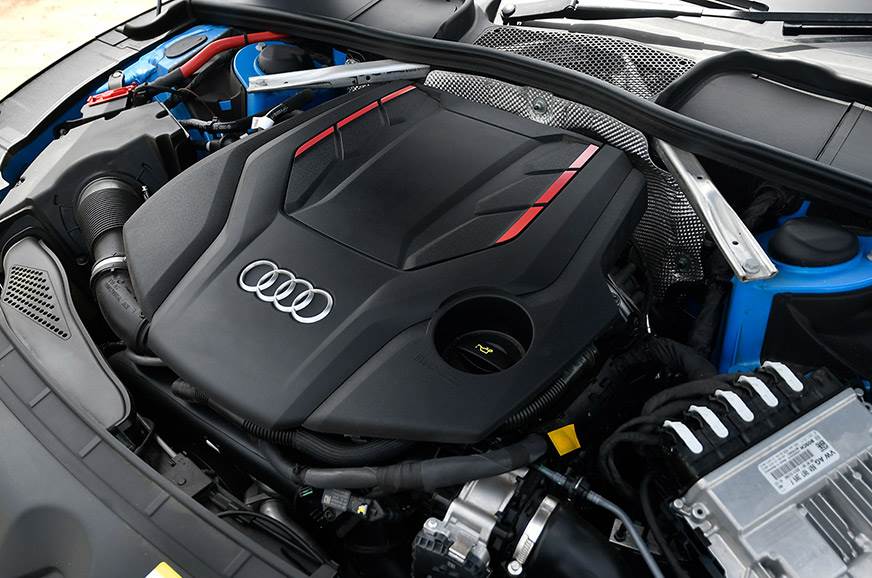 It roars (it’s an aggressive sound if not a particularly melodious one) through its rev band with your right foot pressed down, but what’s interesting is that though the shifts at full chat are quick, they’re not the aggressive headbutt you get in an RS5, which makes sense in this car. 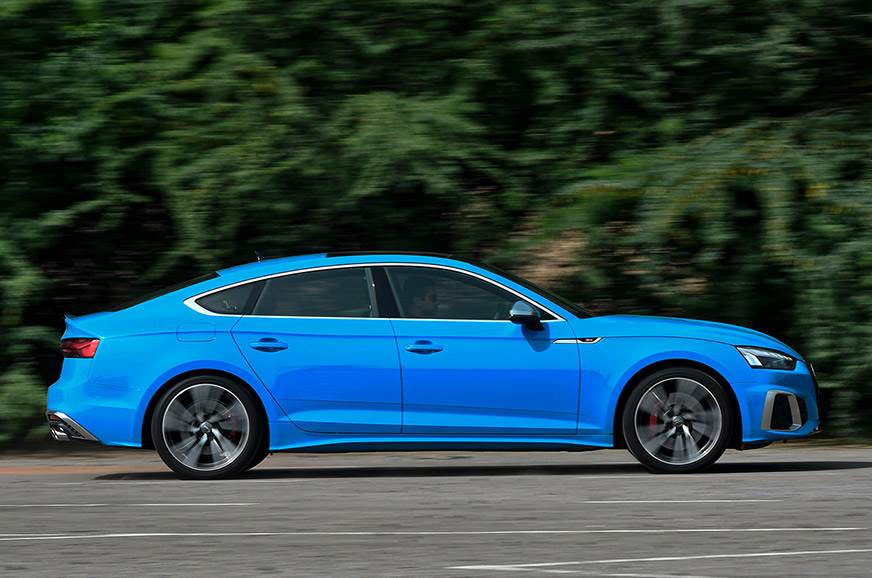 Drop it in Comfort mode and the S5 transform into a smooth and refined everyday luxury sedan.

However, the S5 also shines when you knock it down to Comfort mode; it’s refined, smooth and very easy to pilot, making it an excellent everyday luxury sedan. It even rides surprisingly well, and that becomes more impressive considering our test car didn’t have the optional adaptive damper setup. The base suspension is just that comfy, although you might hear a thud in protest from those 19-inch wheels if you hit a bump too fast. 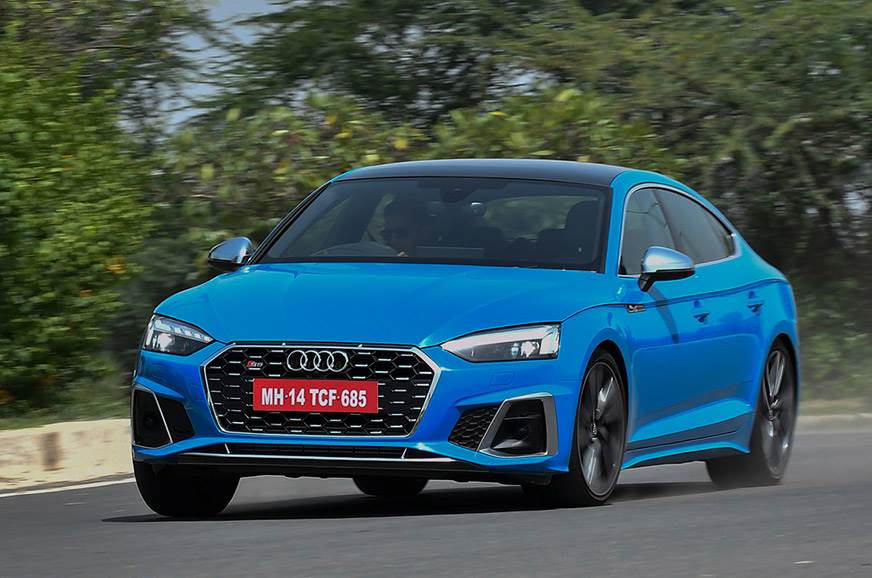 Quattro system offers plenty of grip in the corners though there’s a lot of understeer too.

Handling is, cliched as it may sound, classic Audi, with the Quattro system giving it an unflinching grip on the road no matter how hard you push around corners. There’s quite a lot of understeer too, but this is understandable in something that’s not a full-on sportscar. The steering is quick enough to elicit agile direction changes, but as ever, we wish there was a bit more communication from the front wheels to the driver through the steering wheel. 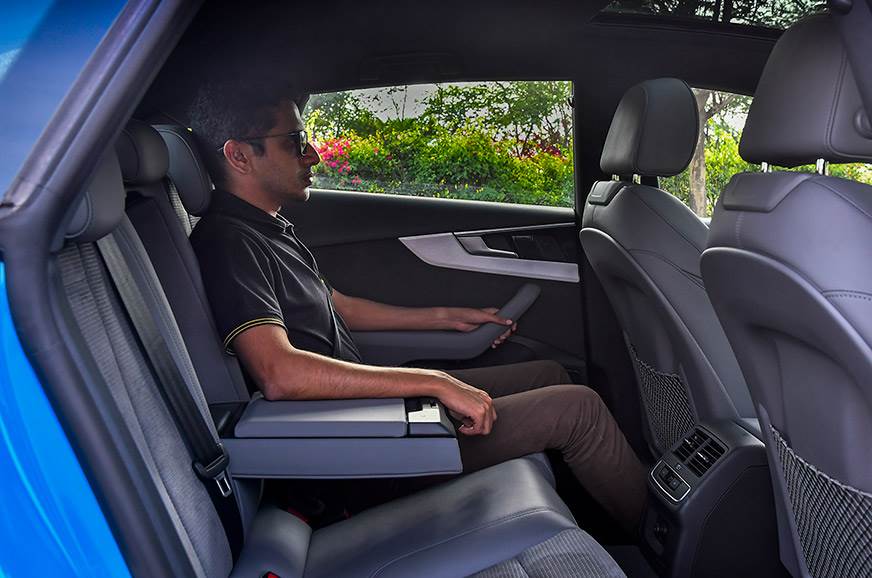 Decent space for two in the rear though headroom is only average.

As ever, the ‘Sportback’ four-door coupe shape affords good practicality, with decent space for two in the back (headroom is only average though), and a huge liftback boot. The S5 could very well be your primary car, and that’s really its biggest strength. While the performance is all there, it’s very friendly and accessible, even for first-time performance car buyers, of which there are likely to be many. And when you’re not tearing up tarmac, it’s a genuinely serene luxury experience. 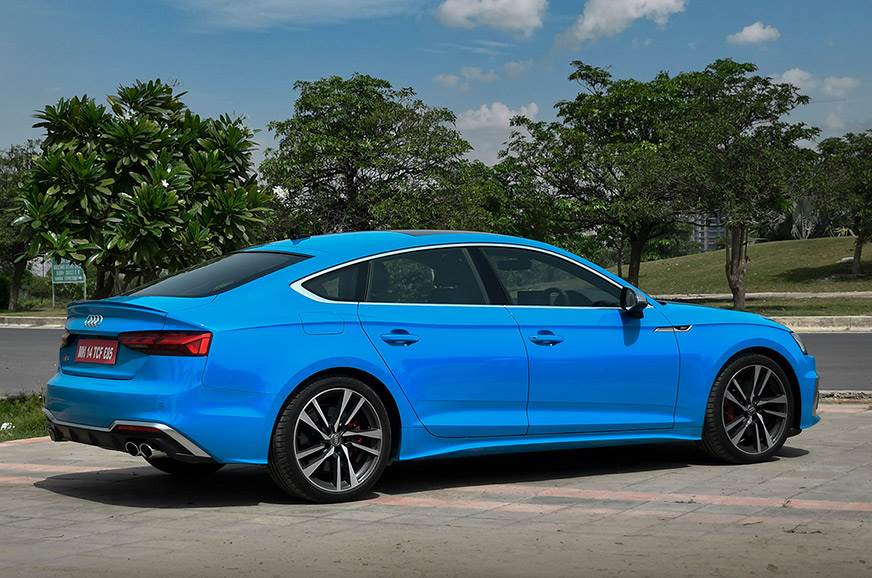 Now, for the elephant in the room – its recently launched rival, the BMW M340i. The Bimmer’s CKD local assembly makes it a full Rs 16 lakh cheaper than the CBU imported S5’s Rs 79.06 lakh (ex-showroom) before options, and that’s not easy to overlook. But don’t write the Audi off entirely, because it still packs in plenty of performance, and errs more on the side of usability, which will be a big bonus for many. It’s also very well loaded and gives you far greater customisation potential, being an import. But perhaps its biggest standout quality is its stunning looks, and because it doesn’t have a lesser counterpart in the range, it won’t be mistaken for anything else.

Audi’s model cycle to remain at six to seven years

Audi e-tron, e-tron Sportback India launch in the first-half of 2021