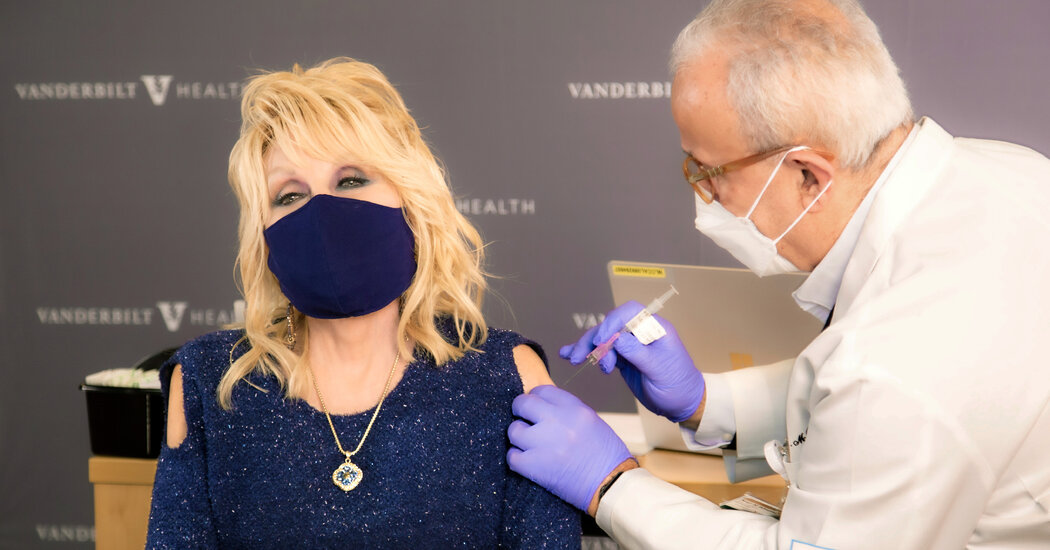 As millions of more Americans become eligible for the coronavirus vaccine, fashion-minded folks are giving extra consideration to what they will wear for their coveted appointments. And as with Zoom, it’s an above-the-waist style story, especially if there’s a vaccine selfie — call it a “vaxxie” — involved.

Some have taken their deliberating to TikTok, asking viewers to choose. Jane Tsui, 24, a perky cosmetics chemist in Irvine, Calif., shared three bare-armed looks earlier this month, including a spaghetti-strap camisole hidden under a “classy” gray blazer and a one-shoulder leopard-print top that offers “lots of arm real estate,” she said. “Take your shot.”

But the emerging vaccine-ready top seems to be the cold-shoulder top, thanks to Dolly Parton. On March 2, the 75-year-old country music star posted a four-minute video across her social media channels, getting her first shot of the Moderna vaccine at Vanderbilt Health in Tennessee.

“Dolly gets a dose of her own medicine,” she wrote on Instagram, a reference to the $1 million she donated last year for coronavirus vaccine research to Vanderbilt University Medical Center, which worked with Moderna.

For the occasion, she wore a sparkly navy blue knit top with cold-shoulder cutouts that was custom designed by her creative director, Steve Summers. “I even have a little cutout in my shirt — I matched it over here,” she told the doctor who administered the shot, pointing to her other shoulder.

Her choice kick-started a vaccine fashion moment. The next day, Hillary Clinton, 73, chimed in on Instagram with a photograph of herself from 1993 wearing a black cold-shoulder dress by Donna Karan. “Loved seeing @dollyparton bring back the cold shoulder as a vaccination look,” she wrote. “Shall we make this a trend?”

Indeed, the cold-shoulder may not have seen this much action since the 1990s, when Donna Karan sent Linda Evangelista down a fall 1991 runway wearing a white one under a matching jacket. Women’s Wear Daily called it “silly,” but when Liza Minnelli wore a black version to the 1992 Oscars, followed by Candice Bergen to the Emmys (and then Mrs. Clinton, in one of her early looks as the first lady), it struck a glamorously accessible chord.

“Everyone wanted it and was wearing it,” Ms. Karan wrote recently in an email. “It became the biggest rage.”

As a top, the peekaboo cold shoulder lent a feminine flourish to career clothes. “You would layer a jacket over it, and then you’d take your jacket off, and it was a surprise shoulder,” said Tom Scott, an assistant professor of fashion design at the Fashion Institute of Technology. “You still saw a little bit of skin. There was a subtle sexiness to it.”

The silhouette remains one of Ms. Karan’s favorites and has been in regular rotation ever since, evolving from its 9-5 roots to an all-purpose, day-to-night style. “People always tell me they own a version of the cold shoulder,” Ms. Karan said. “And what I love most is when I see young people wearing it.”

During the early 2000s, it was a staple of the so-called going-out-top trend, when night life held sway over fashion. It emerged again on some runways about six years ago, when knitwear made a brief comeback, most notably in Phoebe Philo’s fall 2015 collection for Céline, as well as Proenza Schouler’s spring 2016 collection.

These days, the cold-shoulder has less to do with “going out” than the ease with which it allows wearers to be vaccinated. Lyst, the fashion search and shopping platform, has seen searches for cold-shoulder tops increase 21 percent since the start of March, according to a company spokeswoman.

And when Wendy Brandes, 53, a jewelry designer and activist in New York City, went to get vaccinated at the Javits Convention Center in New York City on March 5, she wore a black cold-shoulder sweater that she bought on eBay around 2005. “I just about fell over when I saw Dolly wearing one,” she said. “I knew I kept it for this moment.”

Apparently, she was not the only one. As she was receiving her Pfizer shot, the nurse told her: “Everyone’s wearing these tops.”

Wait, Shopbop Just Launched a Huge Holiday Sale—I’m Losing It Over These Staples