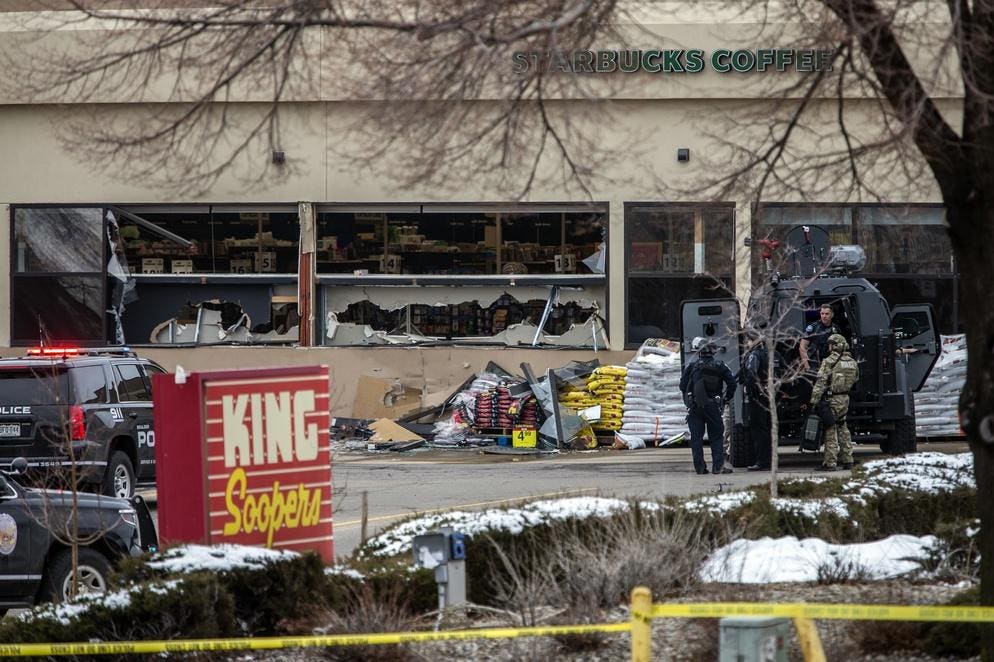 On Tuesday morning the hashtags #EnoughIsEnough and #SecondAmendment were trending and each had more than 30,000 tweets while there were an equal number of posts related to the topic of “Well Regulated” – another reference to the wording of the Second Amendment of the United States Constitution.

All of this was of course in response to the most recent mass shooting on Monday inside a grocery store in Boulder, Colorado. Ten people were killed, including a veteran police officer. As of Tuesday morning the motives remain unclear.

Across social media, especially Twitter, many users made their opinion quite clear.

“We aren’t numb – over 90% of Americans support stronger gun laws. It’s a handful of US Senators beholden to the gun lobby who have refused to act. The Second Amendment wasn’t meant to be a suicide pact,” posted Shannon Watts (@shannonrwatts), founder of @MomsDemand action.

On the other side of the issue, the NRA (@NRA) responded by sharing the wording of the Second Amendment, “A well regulated militia, being necessary to the security of a free state, the right of the people to keep and bear arms, shall not be infringed.”

The responses that followed on Monday evening and Tuesday morning were anything but social. Many users called for greater gun control, casting blame at Republican lawmakers, while supporters of the Second Amendment blamed mental illness.

As with so many issues, both sides dug in and offered sharp and concise opinions. The issue of “Well Regulated” – as in the well regulated militia, wasn’t so much debated but rather a read through shows that it was an echo chamber. Many who see that the wording is to mean a government-regulated military force, akin to the National Guard, repeated that argument.

Across social media the opinions of the Founding Fathers was debated; and those who are opposed to firearms and the Second Amendment clearly see this as an opportunity to push for greater gun control, while supporters of the Second Amendment seemed as determined to make their counter arguments.

But the question must be asked whether any of this is remotely productive?

“Social media discussions are primarily about reaffirming your identity in a group,” explained Dr. Matthew J. Schmidt, PhD, associate professor of national security and political science at the University of New Haven.

While today the discussion is about the Second Amendment, similarly hostile discourse has been seen for any hot button issue and people seem unwilling to even listen. The posts on social media don’t seem to be aimed at changing opinions, but rather reaffirming one’s point of view.

“Everyone has been cooped up for months, and we’re living through the most tumultuous time in history, so for some people they just want their voices heard even if no one is actually listening,” said technology futurist and brand strategist Scott Steinberg.

“Social media is a great platform to do just that right now,” Steinberg added. “People aren’t actually going to social media to have productive casual conversations. They tune into more to be part of crowd in fiery debates and hear from those that have similar opinions.”

This is absolutely true of any issue and isn’t limited to gun control or support for the Second Amendment.

“I doubt the issue of gun control will find resolution on social media, and it’s now a well-established fact that social media tend to have a polarizing effect on most topics,” said Mike Lawlor, associate professor of criminal justice at the Henry C. Lee College of Criminal Justice and Forensic Sciences at University of New Haven.

“That being said, social media does present the most user-friendly platform for grass roots organizing,” said Lawlor. “You saw that in the post-Parkland ‘March for Our Lives’ event and organization.”

In many ways social media has allowed people to feel like they are part of a group or movement, even if the debate isn’t all that social.

“Think of it as shouting into the void – there is something cathartic about that,” said Steinberg. “People need a forum right now. The downside is that because there are two sides of every issue it becomes very polarizing.”

Steinberg added that we’d have to get back to a baseline where we agree to listen to one another before we can have any chance of having a meaningful debate, and that is unlikely to happen given the tone and open hostility.

“People use language that signals their strong belief in the ideas of their own group and some people attack the other side by way of reaffirming their own position as fighters in the culture war,” added Schmidt. “This kind of speech starts to look like sectarian warfare. It’s not reasoned debate designed to reconcile differences or find spaces of compromise. And conducting these arguments on platforms other than social media is unlikely to resolve any differences. People have picked their sides and very, very few will change.”

Given that fact there is little chance that social media will result in any social change.

“There are, of course, two extremes in this debate,” said Lawlor. “But there is also a soft, persuadable middle. Those without critical thinking skills will fall victim to conspiracy theories and paranoia. Those will critical thinking skills will focus on the events surrounding yesterday’s shooting and consider whether reasonable steps could have been taken to prevent it – or at least make it less likely. Each one of these tragedies is a teachable moment. Our challenge is to present the facts and analysis and hope people are willing to listen.”