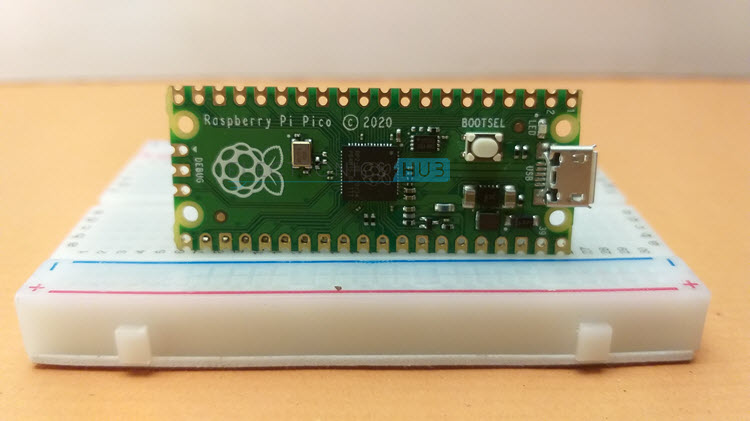 A Brief Note on Serial Port of Raspberry Pi Pico

The beautiful thing about the Raspberry Pi Pico Serial C SDK is that it defines the ‘stdio’ style functions like ‘printf’ for us to use.

Raspberry Pi Pico has two UART peripherals: UART0 and UART1. When you use the ‘printf’ function to print data, the default serial port is UART and in that UART0 peripheral is used.

NOTE: Pico SDK has a board configuration file called ‘pico.h’, which sets some of the important pins as default for different operations like UART, on-board LED, I2C, SPI etc.

In that tutorial, I discussed all the necessary steps for setting up your Raspberry Pi (this is Raspberry Pi Computer not the Pico) like downloading the tools, SDK, examples and programming Pico with a Blinky example.

In the ‘pico-examples’ directory (which is in /home/pi/pico), you can see the list of all the examples organized into several directories. In the previous tutorial, we explored the ‘blink’ directory (and the corresponding source files).

If you go through the list of directories, there is a directory called ‘hello_world’. This directory contains the example projects for serial port programming.

Change to ‘hello_world’ directory and list out its contents. You can see it contains two directories called ‘serial’ and ‘usb’. If you want serial communication through UART Port, then use the project in the ‘serial’ directory. If you want to use the USB Serial option of Raspberry Pi Pico, then go to ‘usb’ directory. 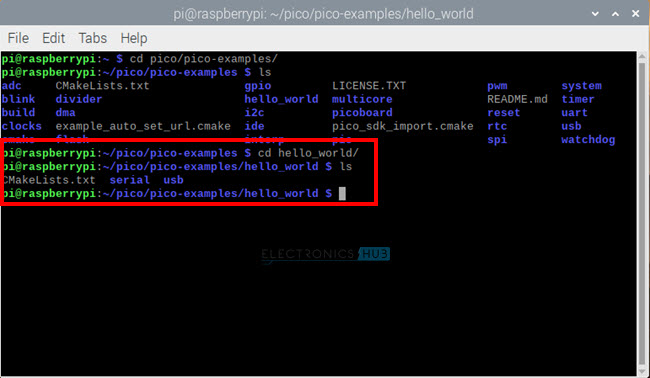 First, we will see the project in the ‘serial’ directory, which when executed, prints the text ‘Hello, world!’ through UART of Raspberry Pi Pico. Change to ‘serial’ directory and list out the contents. You can see two files in this directory called ‘CMakeLists.txt’ and ‘hello_serial.c’. 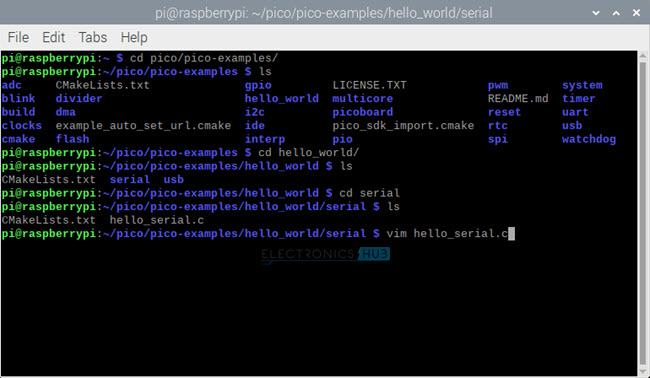 To view the source code for ‘hello_serial.c’, you can use vim with the help of the following command.

For your reference, I copied the code below.

The code is very simple. After some hardware initialization (for UART or USB), the program prints ‘Hello, world!’ text continuously with a delay of 1000 ms. If you notice the code, there is nothing that specifies whether to use UART or USB. The reason for this it is configured in CMake.

Using CMake directives, we can set the output of serial to either UART or USB CDC (or both). In fact, if you open the ‘usb’ directory in the ‘hello_world’ directory, you can see two files: ‘CMakeLists.txt’ and ‘hello_usb.c’. The contents of ‘hello_usb.c’ are exactly the same as that of ‘hello_serial.c’.

Since the default configuration in the SDK is to use the UART0 as the serial port, there is nothing significant in this ‘CMakeLists.txt’ file. If you want to see the actual CMake directive which enables and/or disables UART and USB, then we have to take a look at the ‘CMakeLists.txt’ file in the ‘usb’ directory of ‘hello_world’ directory. 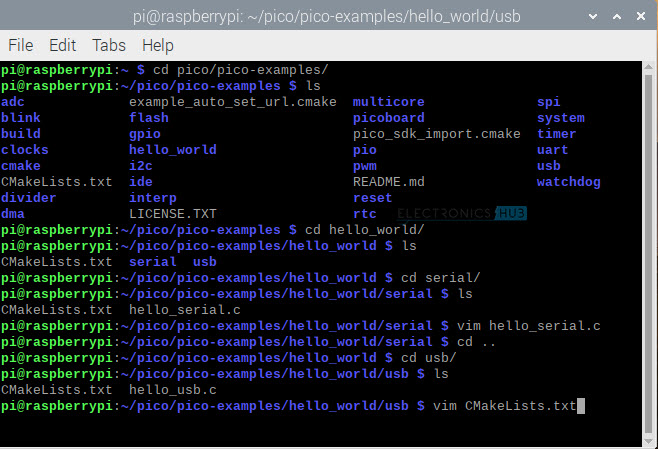 I copied the contents of ‘CMakeLists.txt’ in ‘usb’ directory for your reference.

There are two lines in this file which help in setting the output of serial to UART or USB. They are:

NOTE: In the future projects, if you want to enable ‘printf’ output via USB, then you have to include these lines in the corresponding ‘CMakeLists.txt’ file of that project.

Now that we have seen how to configure the CMake to set the output as either UART or USB, let us proceed with building the projects in the ‘hello_world’ directory. If you remember the ‘blink’ project, the build process is same. 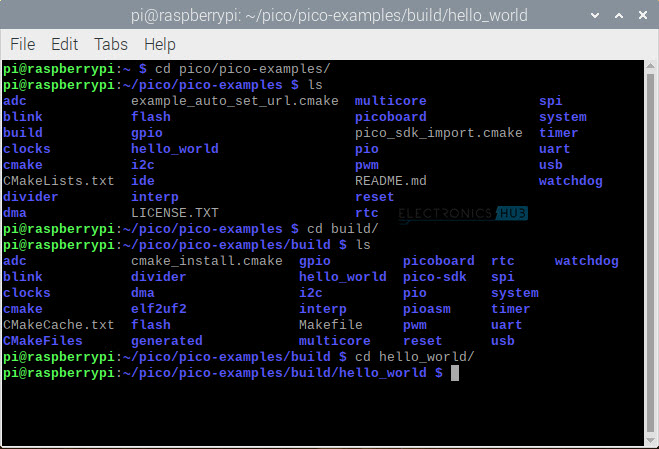 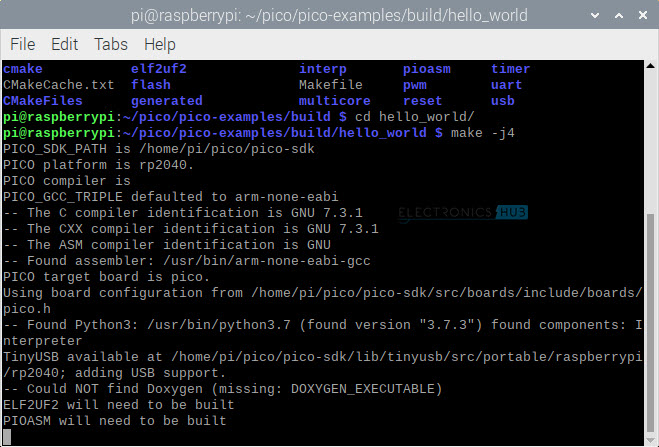 It will take few seconds to finish the build. This will build both the examples in the ‘hello_world’ directory ‘serial’ and ‘usb’. 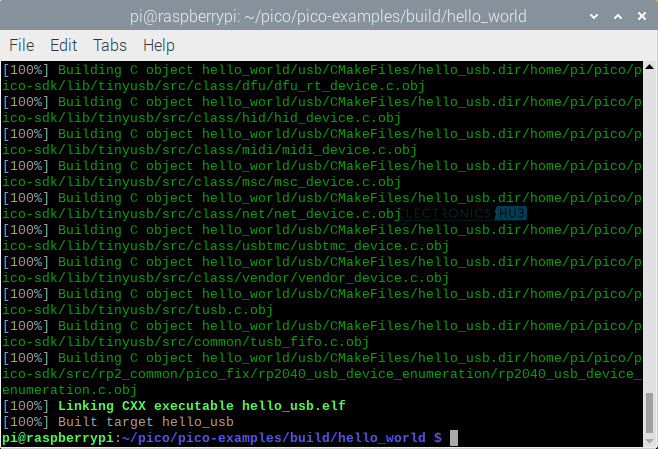 To view the list of generated files, change to individual project’s build directory. For example, let us see the files generated for ‘usb’ example. 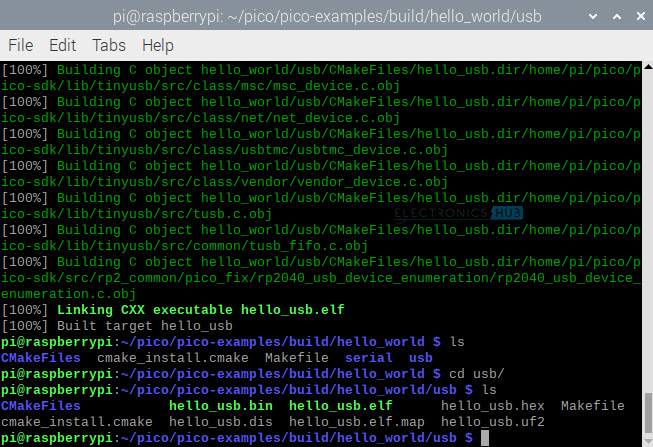 You can see the following four target files for ‘usb’ example project:

We will be using USB example as it is more convenient to view the serial output. I already discussed how to upload the program to Raspberry Pi Pico in the previous tutorials. But as a reminder, I will briefly go through the steps once again.

I also explained a simple trick to add a push button to reset Raspberry Pi Pico, which eliminates the need for unplugging and re-plugging every time you want upload a program. 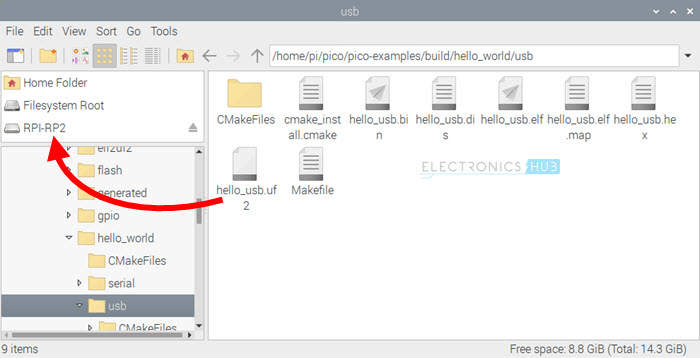 How to See USB Output?

We know that after flashing Raspberry Pi Pico, it started running the program. But how to view the output of the USB? We have to use a special tool called ‘Minicom’. To install ‘minicom’, use the following command in the terminal. 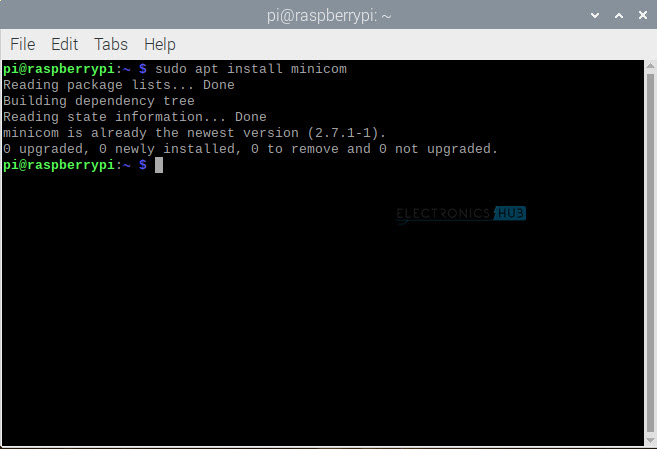 To open the serial port, type the following command in the terminal:

As soon as you hit enter, minicom opens the serial port with baud rate of 115200 and you can see ‘Hello, world!’ being continuously printed. 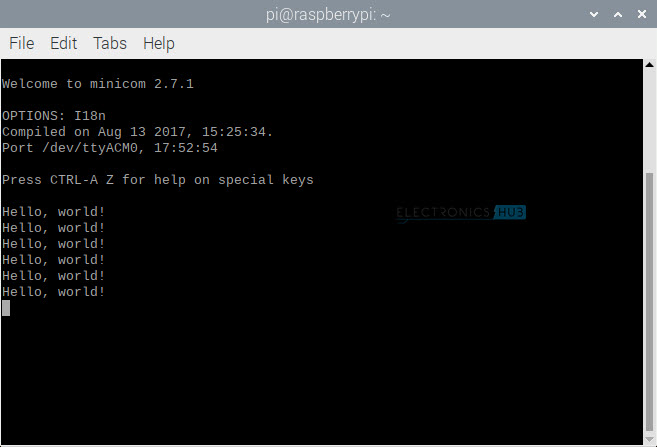 To exit minicom, press Ctrl+a and then x.

NOTE: I haven’t discussed how to view the output through UART of Raspberry Pi Pico as using USB is very easy. But if you are interested in that as well, then I will update this tutorial with a new section on serial output on Raspberry Pi Pico’s UART.