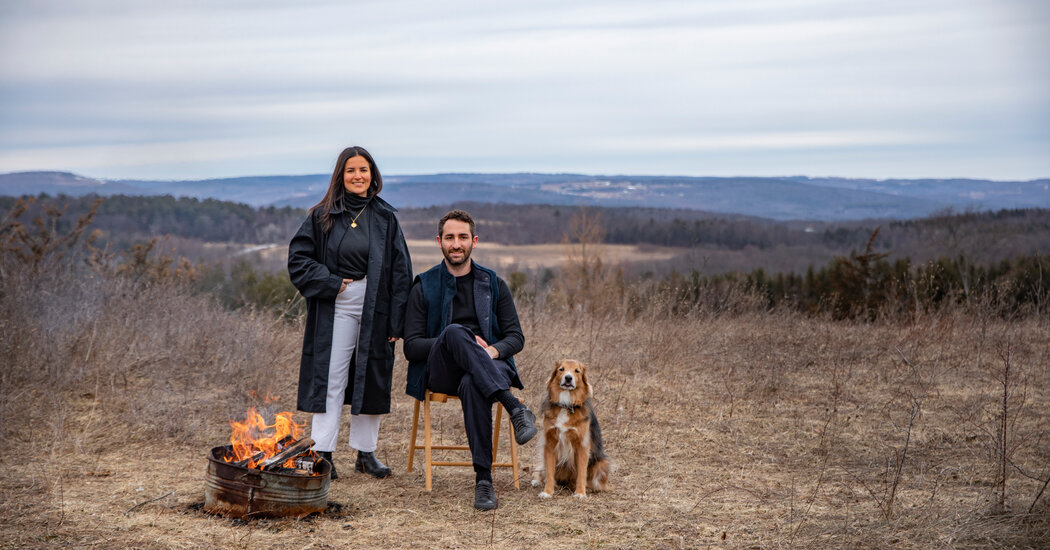 On a cold morning not long ago, Preston Jones and Ariana Diaz parked their car along a country road and hiked up into the land they bought last summer in Cornwallville, N.Y., in the northern Catskills. They built a campfire on a high meadow overlooking rolling farmland and mountains.

Standing beside the fire, as their dog, Lucca, ran wild through the tall, dead grass, Mr. Jones, 31, and Ms. Diaz, 32, discussed their ambitious vision for the five-acre property, along with the adjoining 90 acres of mostly pine and oak forest that they also own.

The couple plan to develop and build an agri-community there, with 12 energy-efficient modern homes on large lots surrounding a farm. The meadow, the prettiest spot on the property, will serve as the community farm where the residents gather.

“We’re going to build our take on the barn, which will be a similar aesthetic to the houses,” Mr. Jones said. “And we’re going to have a hydroponic, vertical greenhouse.”

He will handle the building design, while Ms. Diaz will “bring life to the community,” she said, through arts exhibitions, guest chefs and other programs aimed at enticing the sort of city dwellers who like their nature curated.

Mr. Jones went on: “The farm will be fully operational. We’re going to have egg production, milk production. We will have an on-site farmer. You’re buying into something more than just a home.”

One wonders if this is another. Mr. Jones has no formal design training and previously sold commercial real estate. Ms. Diaz handles marketing for a shoe company in Manhattan. Before the pandemic, the college sweethearts spent a decade living in the East Village. Last September, they moved to a rental in Hudson, N.Y., about 30 minutes away from their property in Cornwallville.

But Mr. Jones and Ms. Diaz have “proof of concept,” they said, through their successful experience developing another, smaller property in the hamlet of Round Top, 15 minutes down the road. In 2017, the couple bought a wooded, two-and-a-half-acre lot for a weekend home. Before he followed his older brother’s footsteps into finance, Mr. Jones wanted to be an architect. So he quit his job and did a crash-course in design and construction, watching YouTube videos, reading articles and talking to contractors when he could.

He built the house almost entirely by himself, laying floors of European white oak, installing a shower skylight, obsessing over the energy-efficient mechanicals. He lived on site for weeks at a time, sleeping in the half-built house and bathing in a creek, while Ms. Diaz continued working at the shoe company to keep money coming in. Even she and her family had their doubts.

“We doubted it because Preston was very ambitious about the type of house he wanted to build,” she said. “Even my sister was, like, ‘He’s going for the most high-end finishes.’”

Mr. Jones said, “Well, I struggled a lot. Obviously, there were a lot of redo’s. But there were a lot of points where there was no redo. I didn’t have more money to buy more material — and it had to be done right because it’s a shower; it can’t leak.”

All along, Mr. Jones documented the build on Instagram. Last May, before he had even finished the landscaping, a local real estate agent, Megan Brenn-White, contacted him. She had clients who were looking for a contemporary second home with a lot of glass and around 1,500 square feet — in essence, the home Mr. Jones just built. Would the couple consider selling?

They had barely gotten to enjoy it, but they didn’t think twice. It had cost around $450,000 to build, including the land. They sold the home, a lofted, barnlike structure clad in cypress trucked up from Louisiana, for $625,000, and used the profits to fund a new dream.

“People were, like, ‘I can’t believe you’re selling this. You built it,’” Mr. Jones said. “Yeah, but it allows us to do something so much more impactful and special.”

Over the summer, they hunted for a parcel for an agri-community inspired by one they visited in Sicily, Italy. They paid $265,000 for the land and pooled seed funding from family and friends for the development venture. They named it Bosque, the Spanish word for forest.

In designing and building a dozen houses on 95 wooded acres, Mr. Jones and Ms. Diaz have their work cut out for them. They will have to survey the land, site the homes, build a road and eventually attract buyers, who will choose lots of about three to 8 acres. Pricing will start at $1.35 million for the smaller of the two planned models, a 2,300-square-foot house. The couple is getting help on the design from an architecture firm, Guillermo de la Parra Laita.

Already, they have faced challenges from locals. Faster than you can say NIMBY, the country road leading to their property was peppered with yard signs protesting the “subdivision.”

Mr. Jones and Ms. Diaz believe it will all work out. And, in a way, it has to.

His second foray into home building will be the first house in the community. It will also be the couple’s own home. Construction is planned to start this fall.

Why Elite Female Athletes Are Turning Away From Major Sponsors

All the Best Summer Shorts Are Already On Sale