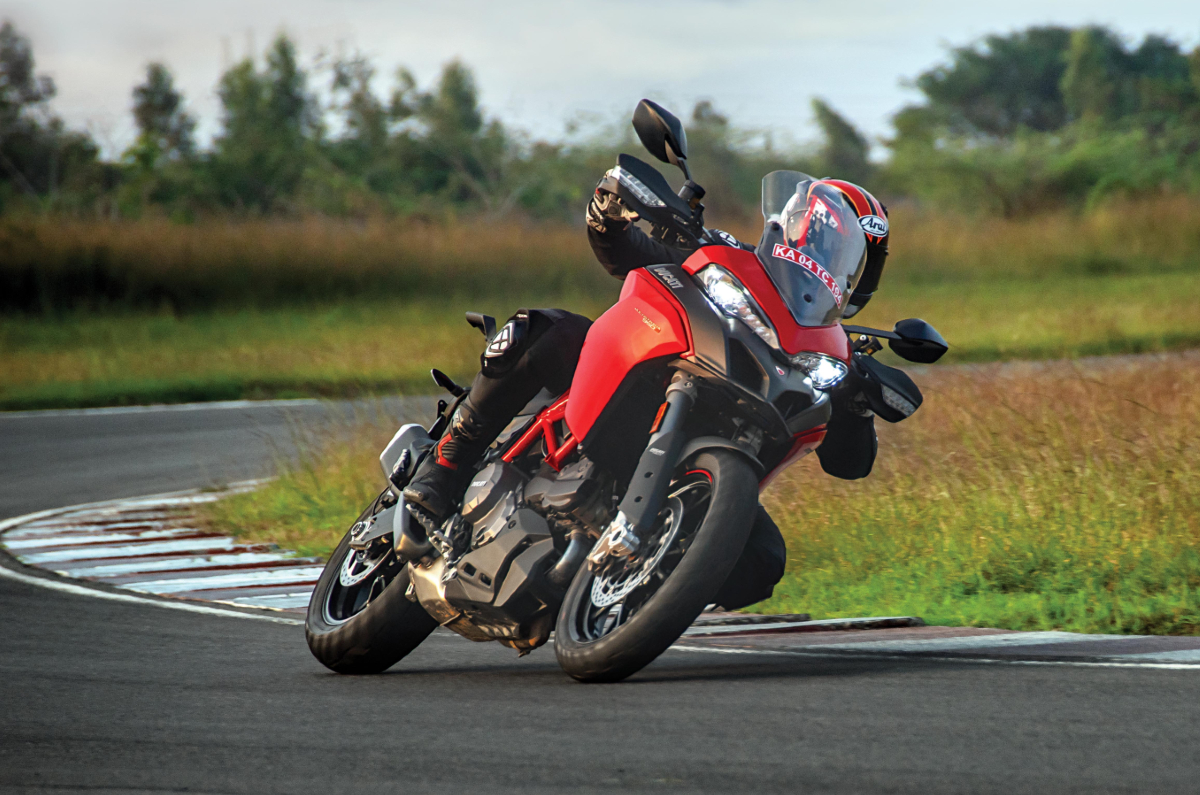 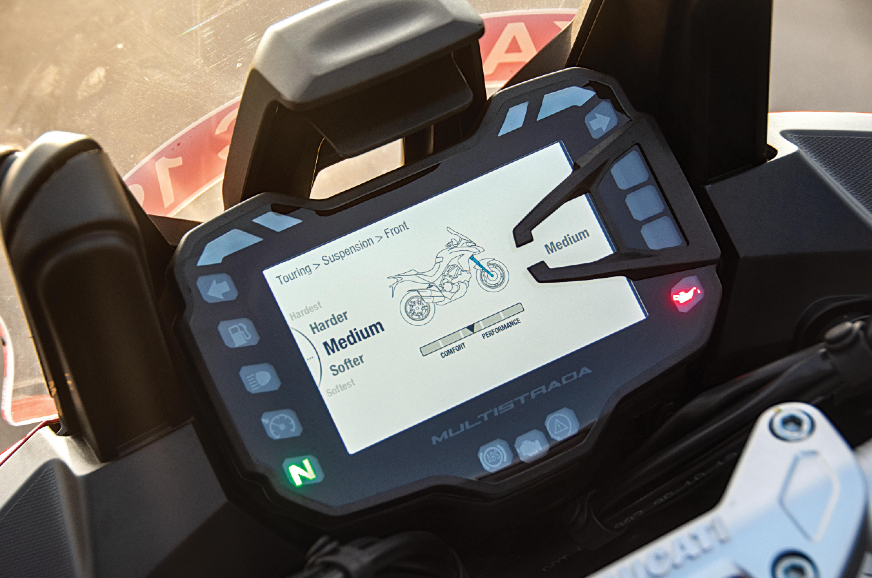 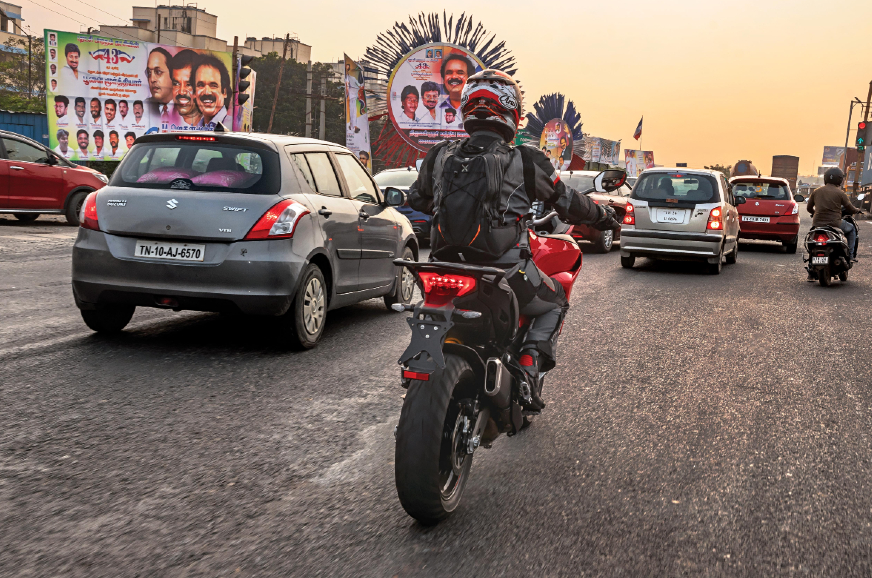 The Madras Motor Race Track or the MMRT, is a fast, flowing and technical circuit that is incredible fun when you are on the right machine. Ideally, a supersport or even a well-equipped street naked is perfect to have a whale of a time on this racetrack. So, you can imagine the mild trepidation I felt as I flipped the keyless ignition switch on the brand-new Ducati Multistrada 950 S, fired up its 937cc L-Twin, and rolled out of the Pit Lane. Did I choose the wrong motorcycle to reacquaint myself with the racetrack after a gap of two years?

If you are wondering why we brought an adventure motorcycle to a racetrack, read about the 2021 Autocar Track Day. And since Ducati had recently launched the motorcycle, we were eager to find out how it would perform, not only on the track but also on the road. But first, the mere idea of riding a big adventure motorcycle on a racetrack is akin to bringing a knife to a gun fight. However, the Multistrada is more of a Swiss army knife equivalent of the motorcycle world and the new 950 S’ comprehensive suite of updates have given it added tools to further establish itself as a genuine all-rounder. 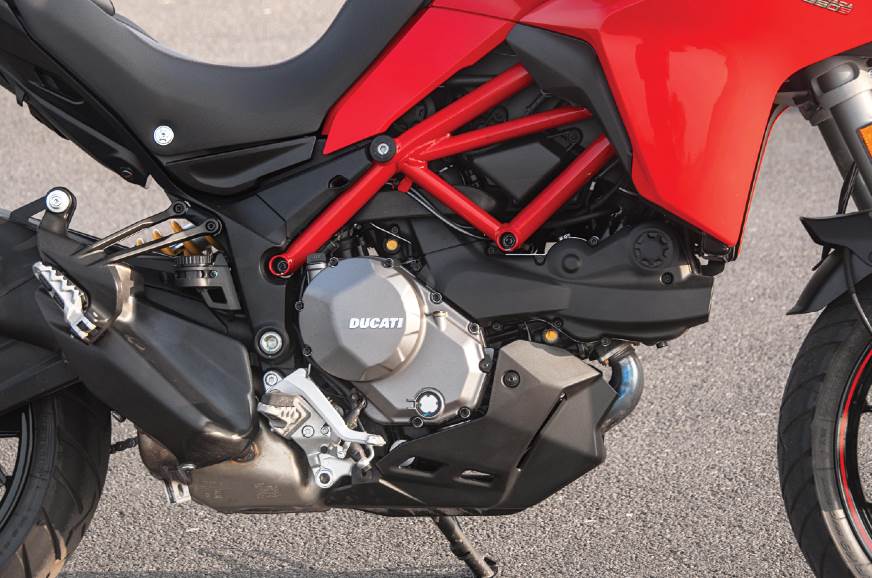 BS6 engine has a meaty mid-range and is unstressed at highway speeds.

To begin with, the L-Twin engine now complies with the Euro 5/BS6 emission norms, and while that hasn’t had any effect on the peak power and torque figures, it feels smoother than the BS4 engine. It is paired to a 6-speed gearbox, with a new hydraulic clutch for reduced lever effort.

Ducati has also thrown in an up-down quickshifter for good measure. The move to BS6, however, comes at the cost of a loud exhaust note, and Ducati purists may find that the new exhaust system has stifled the sound levels to an extent. That’s true, especially at idle, but feed the revs and you’ll be happy to discover that it retains the characteristic Ducati L-Twin bark, with a few pops and burbles on the overrun.

Then there’s the new Bosch six-axis IMU system that enables functions such as lean sensitive ABS, eight-level traction control and cornering lights. But the most significant and welcome of all changes is the inclusion of the Ducati Skyhook Evo semi-active suspension, which is basically electronic wizardry at its very best. So, instead of using a C-spanner and screwdriver to adjust the suspension, racking your brains whether you’ve got the setting right or not, the electronics do that for you. You can tailor the preload as well as damping at both ends with the click of a few buttons and voila, you’ve got a motorcycle that changes character so soon that it’ll put the Transformers to shame. But more on that later. 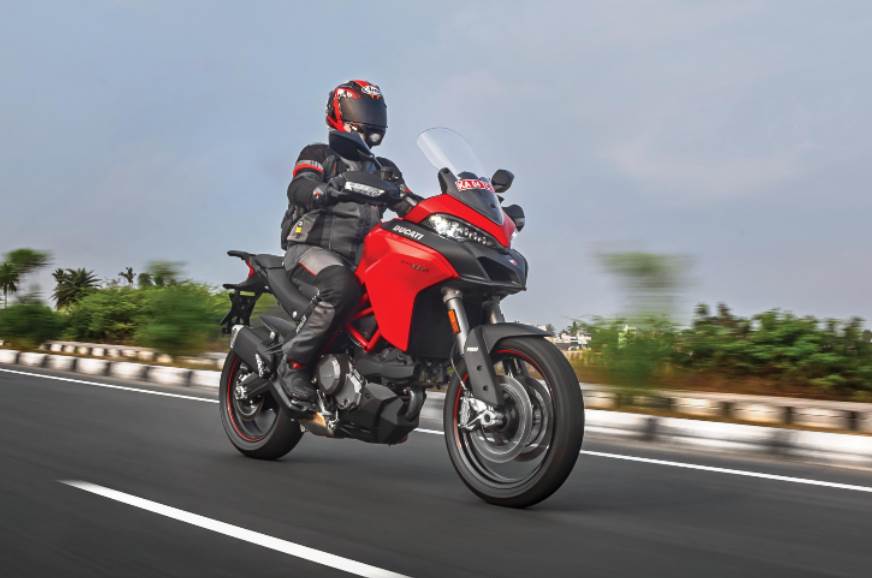 On the whole, these changes have had a remarkable impact on the way this motorcycle rides and handles. And before I forget, the bodywork taken from the Multistrada 1260, as well as this bright red paint, makes the Multistrada 950 S quite a good-looking ADV.

Riding the Multistrada is an exercise in reminding yourself to never judge a book by its cover or in more accurate terms, the way a motorcycle is expected to behave considering its appearance. Because, for an Adventure tourer, it isn’t supposed to make light work of riding on a racetrack, but it does. And it does so astonishingly well.

The engine, which by the way is the same as that in the manic Ducati Hypermotard, produces 113hp, which may not seem like too much in today’s day and age. However, with 80 percent of the 94Nm of torque available between 3,500rpm and 9,500rpm, the Multistrada is super responsive. For instance, while exiting some of the tighter sections of the circuit, which simulates a typical ghat road, the 950 S charges hard and fast. Keep the throttle pinned, bang up the gears using the quickshifter and the speedo readout on the new 5.0-inch TFT rises to eye-ball popping levels. The only gripe with the quickshifter is that, at times, it felt clunky while downshifting.

As expected, there are four ride modes – Urban, Touring, Sport and Enduro – that temper the power delivery, adjust the traction control as well as ABS, and optimise the suspension settings to preset levels. Generally speaking, they keep you far away from making that dreaded phone call to the insurance agent.

Out on the racetrack, with the suspension set to the firmest setting, ABS backed down to its least intervention level, and the ride mode set to Sport, the Multistrada 950 S felt less like a big ADV and more like a sports naked. Whether it was the fast and sweeping C1, the assesses before C4 or the seemingly endless parabola that is C6 and C7, the Multistrada 950 S flows from corner to corner as if on rails. There is so much feedback from the trellis frame and the front end that, despite a 19-inch wheel, it takes little time for you to have faith in its ultra-stable chassis. 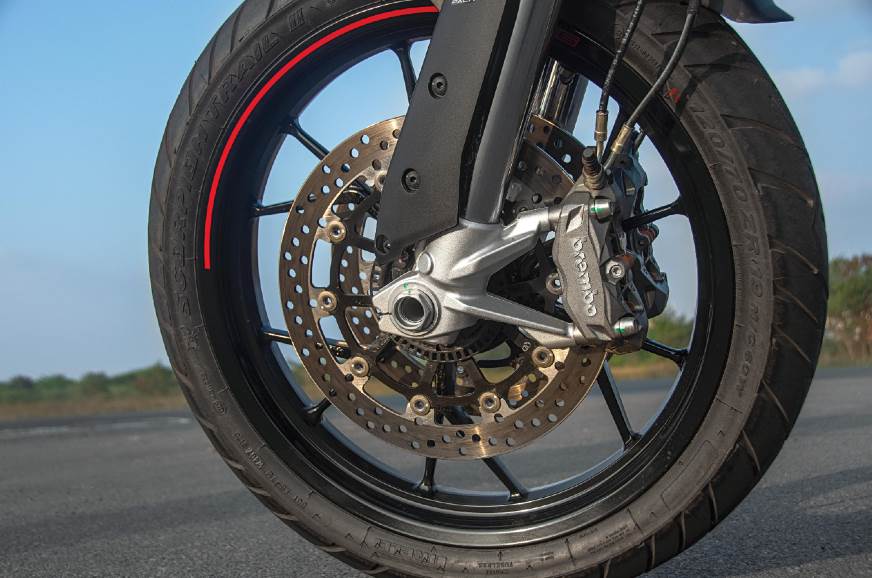 The wide handlebar also makes tipping the bike into a corner effortless, while the Pirelli Scorpion Trail II tyres offer surprisingly high levels of grip and feedback, considering their application. And at times when I got overzealous, the traction control worked beautifully to keep me in line, without chopping power aggressively and upsetting the chassis. Also, the Brembo M4.32s are reassuringly sharp, just the way I’d like my brakes on a quick machine.

After spending the better part of the day on the bike, I actually couldn’t think of any other adventure motorcycle on sale in India that rides and handles in the way this one does. That’s saying something, because, lest you forget, this is a 230kg motorcycle that is primarily built for globetrotting along with a pillion and luggage.

But once all the fun has been had on the track and it’s time to head back to base, it is amazing to see how easily the Multistrada transforms from a hard-charging track motorcycle to a quick, yet relaxed touring machine, literally at the press of a few buttons. The Touring mode softens the suspension as well as the throttle response, while the engine hums away calmly at highway speeds. This is where you appreciate the spacious seat that can be raised or lowered by 20mm, in case the standard 840mm seat height isn’t accessible enough. It is also contoured perfectly for all-day comfort, while the near-upright riding triangle and the wind protection offered by the manually adjustable windscreen makes it possible to cover serious miles without feeling fatigued. 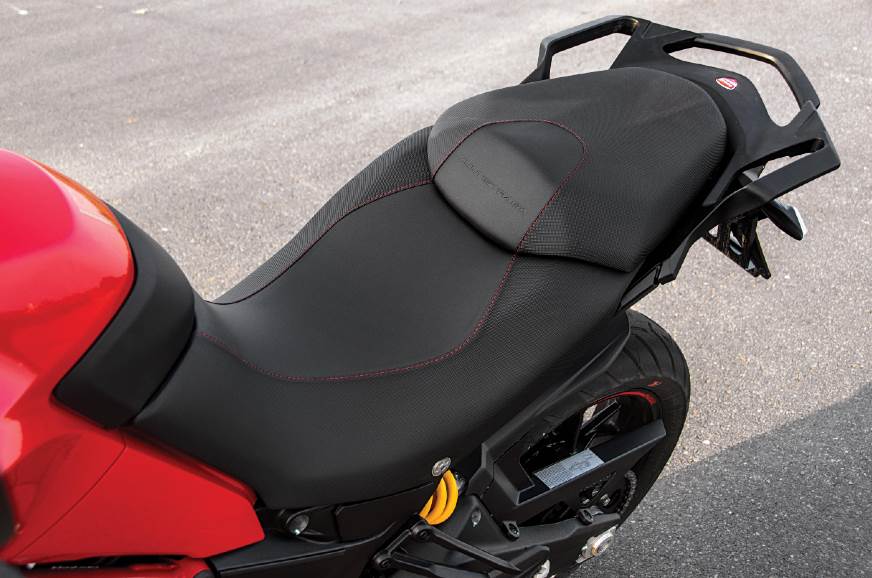 The grab rail has plenty of luggage anchor points.

Come to think of it, with a torquey engine, 20-litre fuel tank and the varying degrees of customisability that the suspension offers, the Multistrada 950 S is a seriously capable mile muncher. You could be trundling down the smooth East Coast Road down south or conquering the Khardung La in the north, and this motorcycle is versatile enough to take everything in its stride. For those asking, yes,it can handle the daily grind in a traffic infested city, albeit with a pretty grumbly engine and heat around the legs to contend with, but it never gets to the point of being bothersome.

At first, when you look at the Rs 15.49 lakh (ex-showroom) asking price, the Multistrada 950 S appears to be an expensive proposition. Especially considering that competition like the Triumph Tiger 900 GT costs significantly less money, at Rs 13.70 lakh. But then again, the Ducati is more powerful, loaded to the hilt with features and handles like nothing else. For this reason, and the fact that it adds a huge dollop of practicality to the mix, the Multistrada is an adventure touring motorcycle that simply can’t be overlooked. 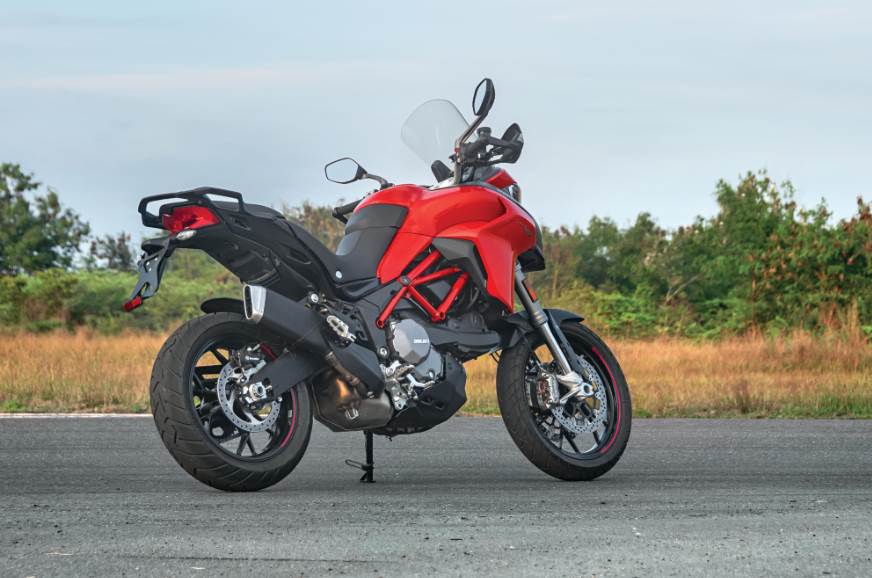 The Multistrada is possibly the best-looking ADV out there.