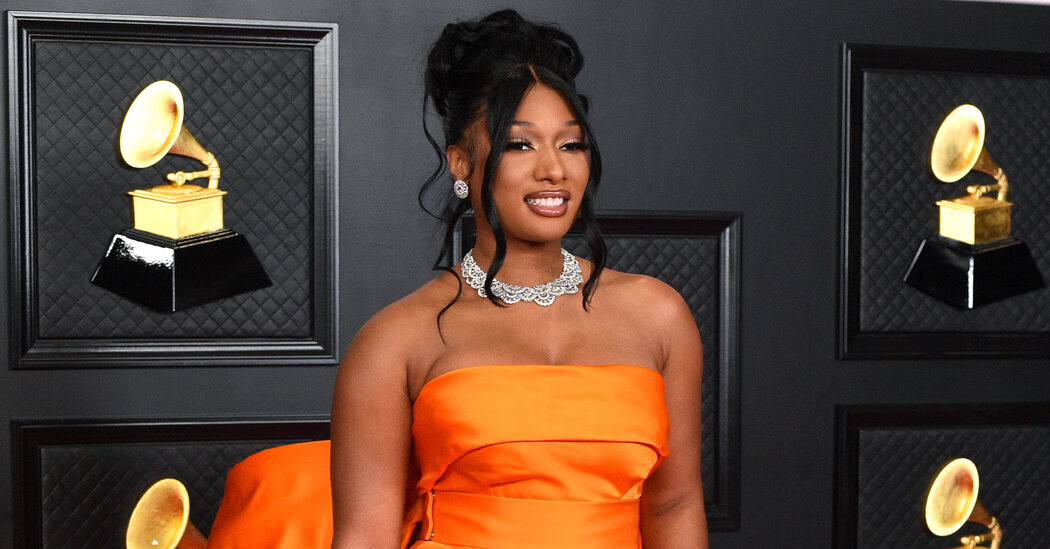 It’s been a while since we’ve actually seen the strutting, preening, over-the-top fashion show that is an awards season red carpet. After all, even before the pandemic hit, there was some rethinking going on, as female performers in particular started demanding not to be simply reduced to what they wore. So when the Grammy powers that be announced they were going to figure out how to bring the whole shebang back — well, it was not entirely clear what that would mean.

Exclamation points aside, they weren’t that far off. The first quasi-live mega-awards red carpet since Covid-19 began was like a fashion primal scream. It was also kind of fun. Who wants restraint when we’ve all been constrained? Doja Cat summed it up when she showed off a Roberto Cavalli gown that involved a leather motorcycle jacket unzipped to the waist and then somehow spliced into a showgirl skirt of neon green and black feathers.

“I like something that’s kind of out there,” she said in her red carpet interview. “I feel like I’ve been kind of toned down before this.”

“Toned-down” was not a word anyone would have used (BTS in hip monochrome Louis Vuitton suiting aside). Phoebe Bridgers came as a bejeweled Thom Browne skeleton, with a full set of bones embroidered on a black gown. Noah Cyrus was a walking tower of whipped cream in exploding ivory Schiaparelli couture. Cynthia Erivo did her best imitation of liquid mercury in Vuitton sequins. Dua Lipa was a crystal Versace butterfly. Megan Thee Stallion channeled a gigantic neon orange supernova in a strapless Dolce & Gabbana column with a steroid-fueled bow on the back, complete with train.

“I wanted to look like a Grammy,” she said, of the dress. “I manifested this.”

She wasn’t the only one. Suddenly, costumes that once might have provoked eye rolls and cynicism seemed like a courageous refusal to let the last year win. And the red carpet, which was increasingly dismissed as a mere marketing tool, has a whole new role.