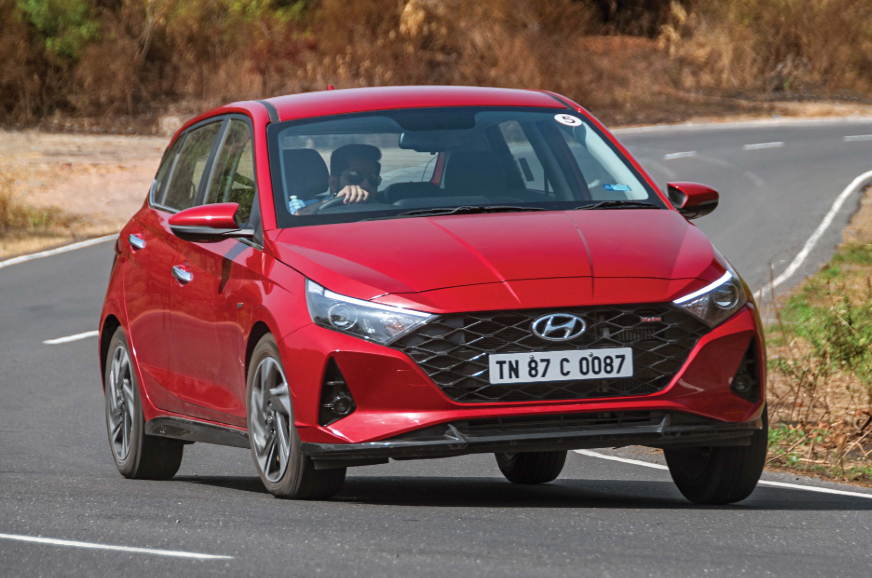 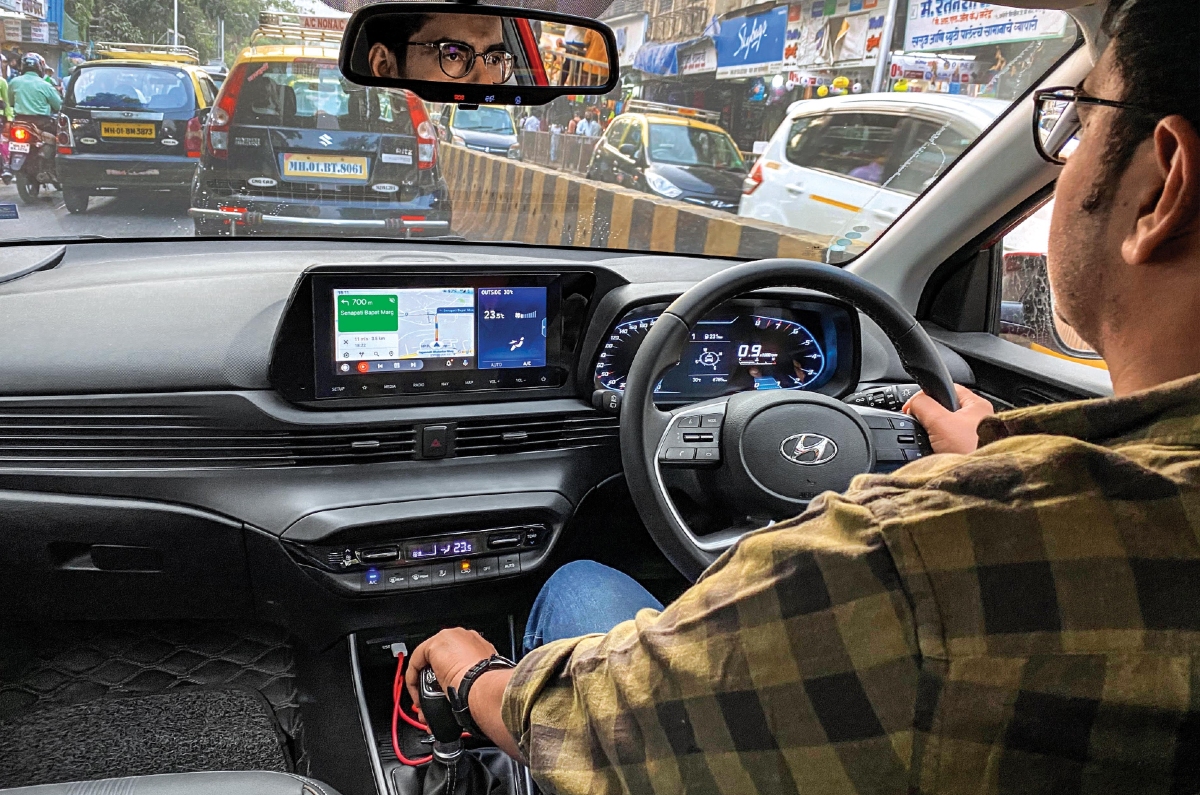 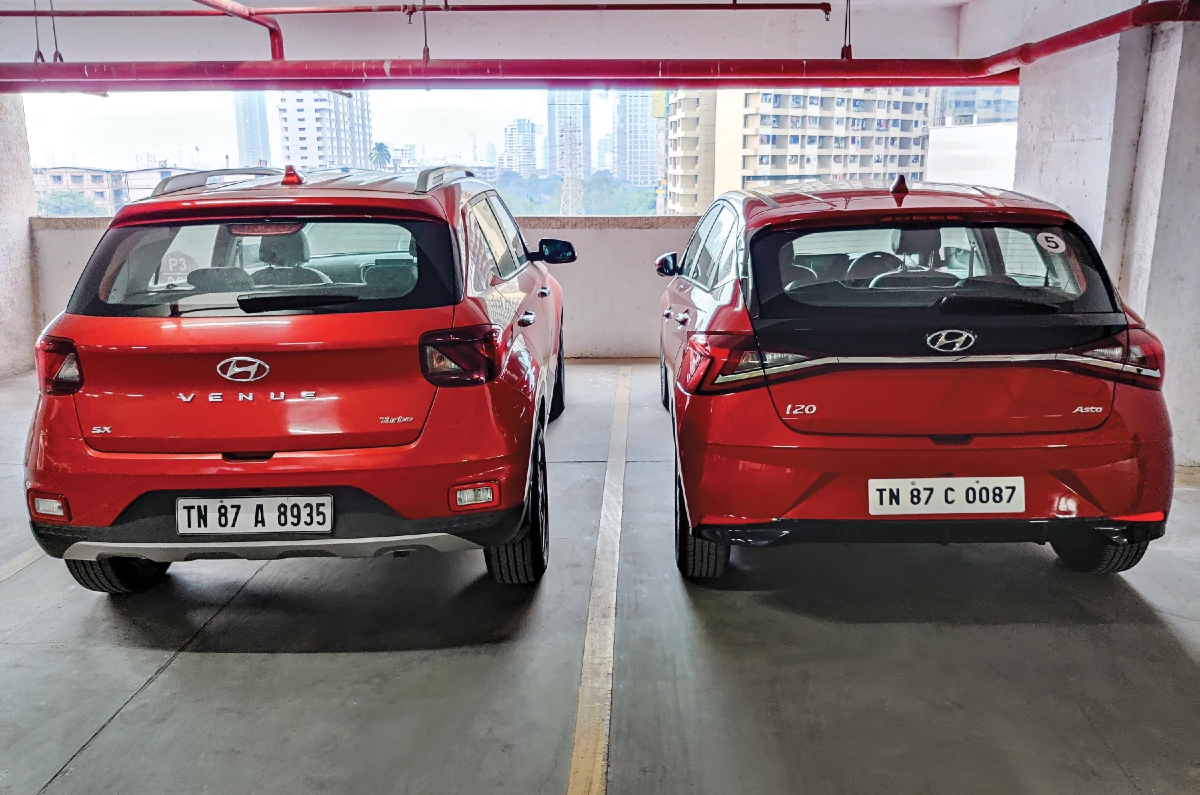 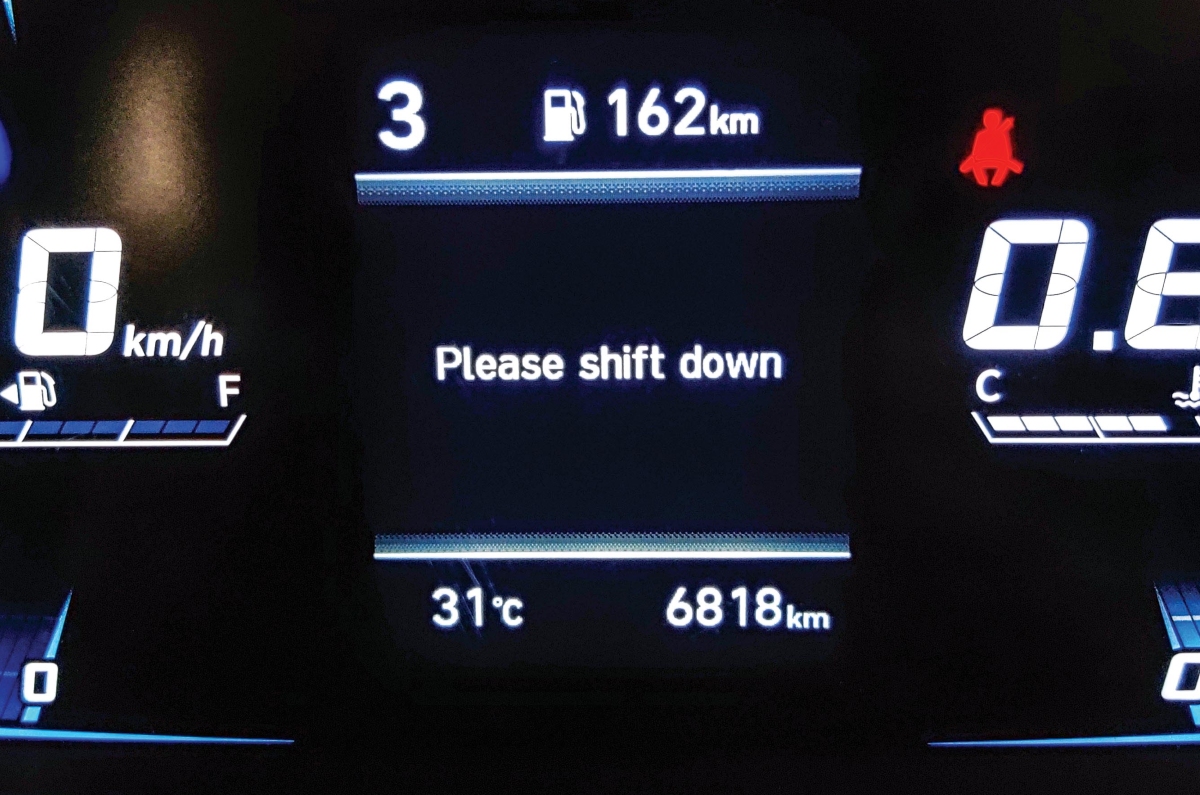 Ladies and gentlemen, please welcome the Hyundai i20 Turbo iMT to the Autocar India long-term fleet. It’s an interesting replacement for the Hyundai Venue Turbo that I called ‘mine’ for the better part of a year. Compact SUV to hatchback is a reverse migration of sorts, and then there’s the gearbox. Where our long-term Venue featured a conventional 6-speed manual gearbox – you know, the three-pedal variety – the i20 Turbo is specced with an intelligent manual transmission (iMT). Here, gear changes are affected via the gear lever but there’s no clutch pedal to modulate. The part manual-part auto setup sounds more confusing than it is in practice. 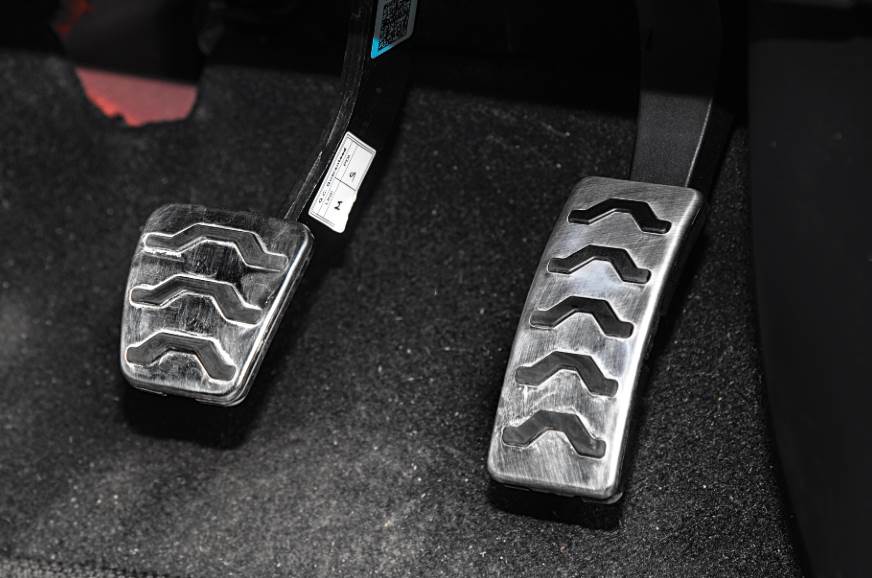 EASY DOES IT: You still have to shift gears but with no clutch to deal with, driving stress is greatly reduced.

For one, it doesn’t take all that long to get used to the arrangement. You’ll quickly learn that the automatic clutch modulation is very smooth and the system is intuitive. There are no jerks or delays and it feels surprisingly sophisticated in a way that the technologically superior AMT doesn’t. I’d have an iMT over an AMT, thank you very much. The hardware behind the scenes works so well that, in flowing traffic, you’d often tend to forget the job of actually shifting gears is yours. Beeps and a gear change indicator on the MID are your car’s way of reminding you of what needs to be done. That this i20 feels more auto than manual is a big win for the iMT gearbox. 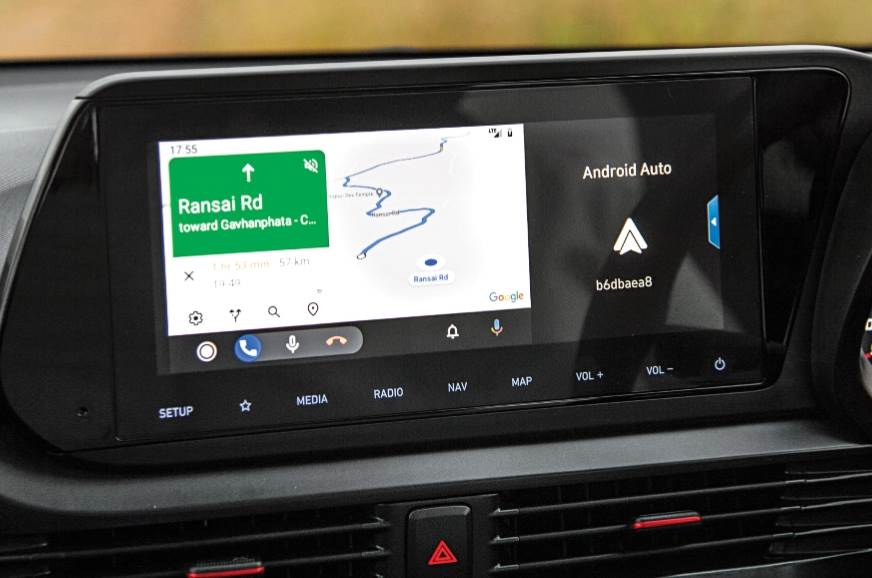 SCREEN AWARDS: The 10.25-inch touchscreen is excellent. It’s slick to use and the graphics are crisp.

Of course, not having a clutch pedal to deal with makes life infinitely better on Mumbai’s crowded roads. So much so that I even find myself open to the idea of venturing out in rush hour traffic to meet friends across town. Who’d have thought, a gearbox would have such a bearing on my social life. Hyundai’s iMT promo videos show the driver tapping his unburdened left foot to the music. I completely relate to the visuals. The i20 creeps forward smoothly, moves with grace even on inclines, and as a plus, gearshifts on the 6-speed gearbox don’t require much effort either. Even the odd quick shift has been catered to exceedingly well. No complaints on fuel efficiency thus far, which has been hovering around the 11.5kpl mark, recorded almost entirely in crawling traffic. 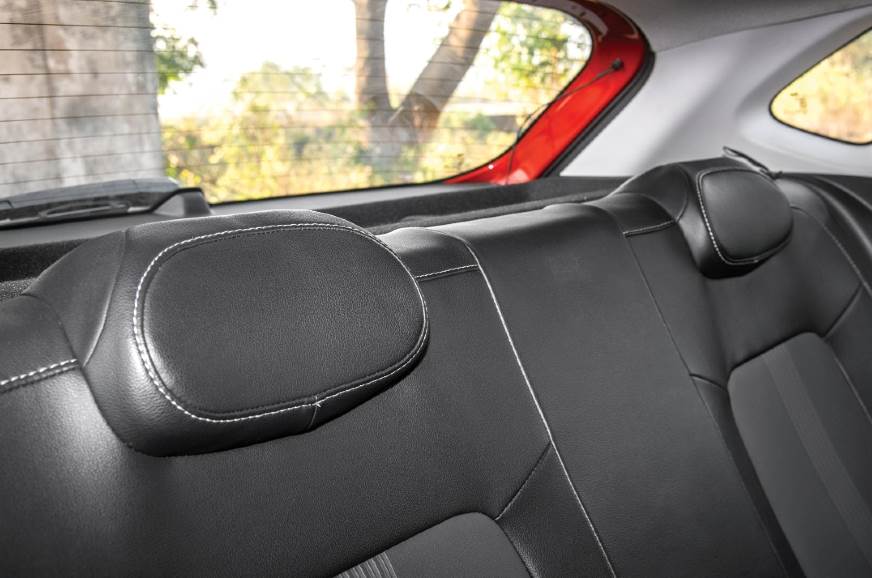 CUTTING CORNERS: iMT misses adjustable rear headrests that ought to be standard in a car as pricey as the i20.

There are also other things I’ve taken to quite keenly. The touchscreen gets a big thumbs up. The 10.25-inch unit is big but it’s also well positioned and doesn’t distract you. The crisp graphics and slick interface also make it feel cutting edge. If Hyundai could also throw in wireless Android Auto/Apple CarPlay, it’d be perfect. I haven’t found a neat way to plug my phone in. I have warmed up to the digital instrument readout though. I’m still not a fan of the counter- clockwise tacho but then again, I refer to the digital speed and RPM readings, rather than the bar-like meters themselves. More than anything, the bright instrument’s display, along with the large touchscreen, uplifts the look of things inside the cabin. I also like how the blue ambient lighting at the door pockets adds more colour and vibrancy inside. What also makes the never-ending commutes more tolerable is the Bose sound system. I’m no hardcore audiophile but there is a discernable depth to the sound. 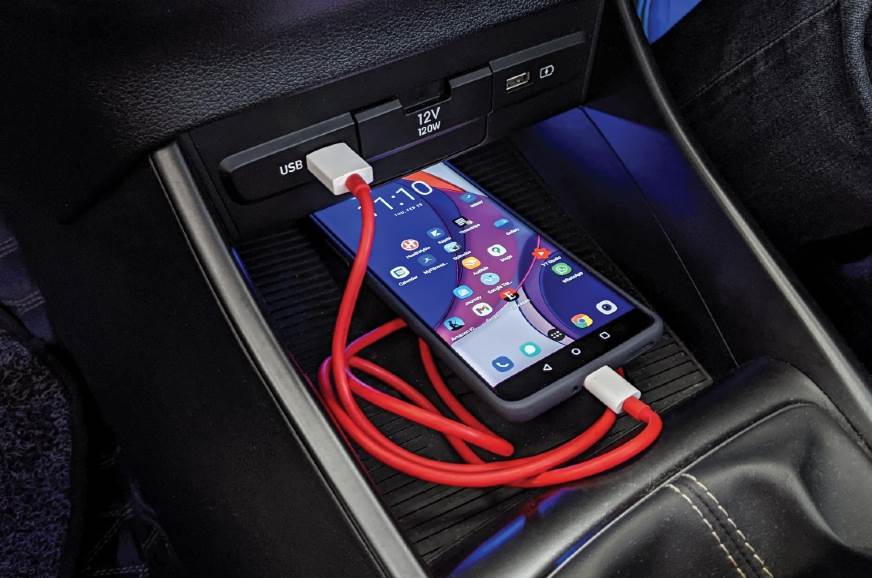 WIRED UP: There’s no neat way to connect your phone. Wireless Android Auto would be welcome.

Moving from a compact SUV to a hatchback changes your view of the world and quite literally so. Personally, I’m quite alright with the i20’s lower seating vis-à-vis the Venue, and visibility is also quite good, thanks to the large glasshouse. However, I do sense my parents, who’d be visiting soon, won’t take quite as readily to the drop down into the lower cabin. What’s also playing on my mind ahead of their visit is the lack of adjustable rear headrests. Frustratingly, no version of the i20 iMT gets this basic safety feature which is something that ought to be standard in 2021.

I’ve been pining to drive to Goa for some time now but with a resurgence of COVID-19 cases in Maharashtra, the trip doesn’t look like it’ll happen any time soon. There’s still time, then, before the i20 iMT can stretch its legs. For now, it’s life in a metro.