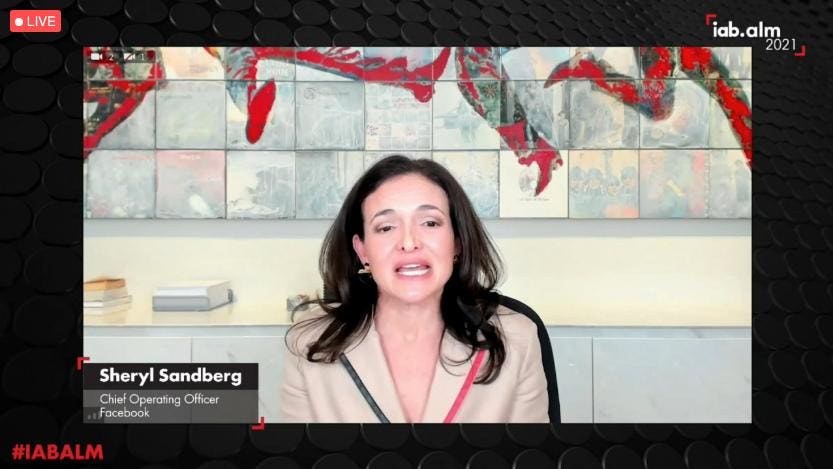 Facebook’s chief operating officer had a reassuring message for ad-industry types watching her appearance at their conference today: Everything is awesome.

Or as Sheryl Sandberg said towards the end of her appearance at the Interactive Advertising Bureau’s online annual leadership meeting, “Personalized ads enable beautiful things to happen.”

The COO’s 25-minute interview with IAB executive chair Randall Rothenberg started on what has been an uncomfortable topic for the social network, hate speech on the platform. But after Rothenberg allowed that his experience of Facebook is mostly cat photos and family photos, Sandberg said in response: You’re right!

“Almost all of the content on Facebook is friends, family, personal connections,” she said before citing Facebook’s latest figures on its content enforcement. “Hate speech is 0.07%; still too much, but very small.”

The COO further asserted that in getting its automated systems to catch 97% of hate speech before users report it, Facebook actually risked going too far. “In order to get the numbers to be that good, sometimes we over-enforce,” she said.

She did not mention numerous reports in the Washington Post, BuzzFeed News and elsewhere that Facebook management overrode content-moderation decisions to avoid offending some of its more vituperative right-wing actors with documented histories of violating Facebook’s rules against hate speech and misinformation.

Rothenberg then gently raised another frequent complaint about Facebook, its use of content-recommendation algorithms to keep people engaged there.

“There’s a lot of mystery attached to them,” he said. “Can they be tuned in different ways to weed out hate speech?”

Sandberg described this as a simple matter of Facebook trying to make us happy.

“When you engage with content, we show you more of it,” she said. “We don’t push content to you, other than ads.”

But less than six months ago, Facebook was experimenting with ways to get people to join more groups on the platform that included pushing a “Related Discussions” link in the middle of a comments thread between my mom, my brother and myself.

(That link no longer appears in that thread; Facebook PR says this test has wrapped up in the U.S. but continues in some other countries.)

And both a May 2020 Wall Street Journal report and a lengthy story in MIT Technology Review published Thursday documented how Facebook executives quashed attempts by staffers to dial back recommendation algorithms that pushed people towards more divisive and enraging content.

Much of this week’s discussion at the annual gathering of New York-based IAB has covered how to do business without collecting as much data, but Sandberg told Rothenberg that Facebook users don’t have to worry about privacy because Facebook doesn’t share their details with third parties.

“You tell us who you’re trying to reach, we take that and we show the ad,” she summed up Facebook’s pitch to advertisers. “We don’t give you anything back.”

That fairly summarizes the process—I’ve tested it myself—but Sandberg’s defense of it as “privacy-protective” glossed over how much data Facebook collects. That happens not only on its own platform but across the web at sites (this one included) that embed its code.

You can end Facebook’s monetization of your web habits by changing its Off-Facebook Activity setting—a simpler remedy than the site-specific opt-outs that Sen. Ron Wyden (D.-Ore.) denounced in a Monday IAB appearance as making privacy ”so annoying that most people are going to give it up.”

But Facebook once again declined to reveal how many users have used that exit or have simply checked their Ad Preferences to see the profiles Facebook keeps of their interests.

Sandberg’s back-and-forth with Rothenberg ended with a discussion about possible new internet regulations—something Facebook has endorsed with so many ads that this campaign might as well represent a Facebook bailout of the news industry.

“Most companies are against regulatory changes that affect them,” Sandberg said. “We are not.”

In particular, Facebook supports nationwide privacy legislation to replace state-by-state legislation along the lines of the California Consumer Privacy Act or Virginia’s just-passed Consumer Data Protection Act as well as tighter liability provisions for online forums that would hold them responsible for policing “harmful content” and upholding election integrity.

But, Sandberg emphasized, it was important to write rules that don’t hurt smaller startups without the compliance resources of a tech giant like Facebook.

It would have been hard for anybody to disagree with her description of her employer’s ability to roll with even complex and overlapping regulations: “We’re Facebook, we can adhere to that.”