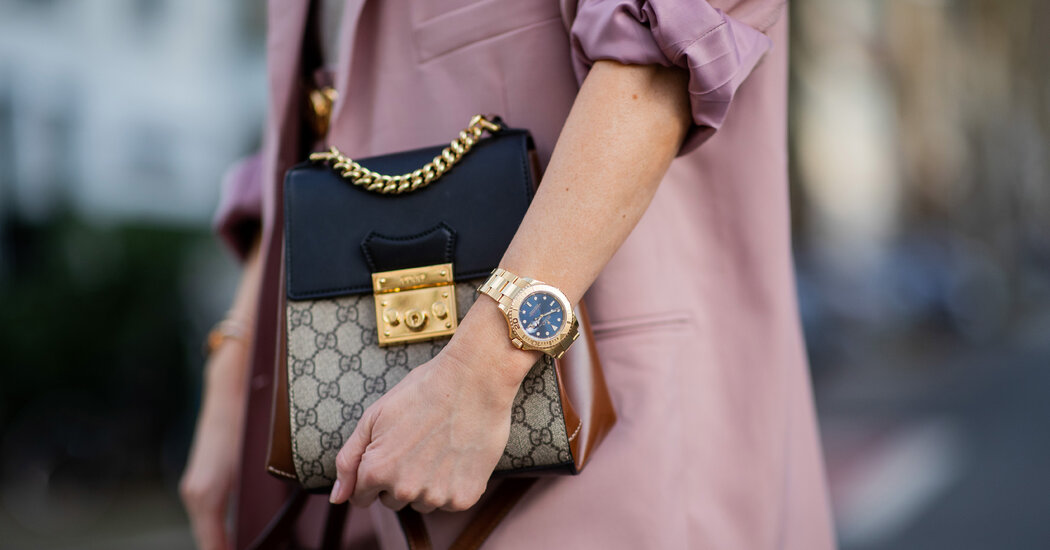 What is a woman’s watch?

From the Swiss industry’s perspective, it’s a quartz-powered timepiece small in size and elaborately decorated (with diamonds, of course).

Ask women, however, and the watches they covet and wear often have little in common with what traditionally have been called the ladies’ collections. And their frustration with the trade’s reliance on outdated gender classifications, stoked by decades of sexist marketing campaigns, has reached a boiling point.

That became clear in early February, when Laetitia Hirschy, a watch publicist based in New York and the founder and chief executive of the public relations agency Kaaviar PR, and Suzanne Wong, editor in chief of the Geneva-based watch website WorldTempus, founded Watch Femme, a female-centric community that organizes weekly chats on the social audio app Clubhouse. During the inaugural discussion on Feb. 11, which drew around 60 people, Ms. Wong summed up her exasperation with the industry status quo.

“What is a woman’s watch?” she said. “It is a watch owned by a woman. I don’t see any clearer way to put that.”

The discussion, which ran for more than an hour and a half, lingered on the question of representation, as participants emphasized the disconnect between how the industry speaks to women and how they wish to be addressed.

“Why do men have 16 categories and there’s one tab for women” at brand sites online, asked Joy Corthésy, artistic director at Idiome, a luxury public relations agency based in Geneva.

On Jan. 23, the German watch vlogger Jennifer Leingang, known online as Jenni Elle, tackled the topic in a YouTube video called “Here’s Why Women Don’t Like Watches” in which she skewered the industry for its long history of patriarchal messaging, apparent even in ads targeted at women.

“Though watchmakers have toned down the sexism in their ads, it’s still there,” Ms. Leingang said on the video, as a succession of watch ads featuring provocatively dressed female celebrities appeared onscreen. “Women are often displayed as super sexy whilst wearing their watch.

“She doesn’t really do much with the watch — it’s portrayed as an accessory to her,” she added. “Watches marketed to men are shown to be of use to a man.”

Cara Barrett, special projects manager for the popular watch site Hodinkee, also had been contemplating the issue. On Feb. 9, she published a column, “All Watches Should Be Unisex — And Here’s Why.”

“As a consumer, I don’t want to be told what I should and should not buy,” Ms. Barrett wrote. “I want to decide on my own. I do not need a salesperson to condescendingly guide me to a poorly lit case to show me what they think I would like in the ladies’ section.”

“If you take away those labels,” Ms. Barrett said in a follow-up conversation, “it makes it easier for everyone to buy what they want.”

The article struck a chord with Hodinkee’s audience, earning more than 500 (mostly supportive) comments online and nearly 600 on Instagram.

“Thank you, Hodinkee,” Kat Shoulders, co-founder of the Tenn and Two watch podcast, wrote on Instagram. “I’ve said for years that watches should be like cars. Take the gender out of the label and just let people pick what suits them best.”

With online watch sales exploding as a result of the pandemic’s effects on brick and mortar retail, luxury retailers have found that consumers are doing just that.

“More women are shopping in men’s than men shopping in women’s, but increasingly, our customers aren’t perceiving a gender divide in watches,” said Alison Loehnis, president of the luxury e-tailers Net-a-Porter and Mr Porter.

The crossover is most obvious in the way both genders are approaching the question of size.

Twenty years ago, when Panerai kick-started an industry craze for oversize watches, its popularity among both men and women prompted the first wave of conversations about what defined a woman’s watch, said Elizabeth Doerr, co-founder of the watch blog Quill & Pad.

“Women were wearing these 47-millimeter monsters,” Ms. Doerr said. (In some of the brand’s Luminor models, for example, the dial was almost 2 inches in diameter and the watch case more than a half inch thick.)

Over the past decade, however, vintage watches, which are smaller in scale, have grown in popularity. Yet as men have gravitated to them, they have stumbled over the industry’s traditional gender boundary: Any watch less than 34 millimeters is categorized as a ladies’ piece. (It usually will also have a battery-powered quartz movement and be embellished with feminine details such as a mother-of-pearl dial or a light-color strap).

“I’ve come to the realization that a smaller watch looks better on my wrist,” Jarrod Cooper, founder of the Los Angeles-based collectors group Neighborhood Watch Club, said on a recent video call where he showed off his 34-millimeter Rolex Datejust. But “even if they did bring out a smaller piece it would be a quartz movement. No one is going to pay that price for a quartz piece. They want a mechanical.”

Very few watchmakers have made gender-neutral watches and sizing into the cornerstones of their brands, not counting the notably gender-free Apple Watch. One exception is the German watchmaker Nomos Glashütte, which in 1992 came out with its first watch, a spare, round 35-millimeter timepiece called the Tangente that was “considered the archetype for unisex style” by the German design community, said Katrin Bosse-Foy, the brand’s international public relations manager.

“There was a practical reason: The caliber that powered the first watch fit in a 35-millimeter case,” she said. “It was streamlined, efficient and pragmatic, which is very German.”

Cartier is another watch brand that, despite the French firm’s storied reputation as a jeweler, has long attracted both men and women. “The Tank was commercialized in December 1919 in one size,” Pierre Rainero, Cartier’s image, style and heritage director, said on a video call.

He underscored the brand’s history of making watches in unusual silhouettes, such as the bent-out-of-shape Crash or the bathtub-shaped Baignoire, and said that in markets like Britain and Italy — where the concept of the gentleman dandy and the “bella figura” give men the freedom to choose more elegant, even feminine timepieces — such shaped watches “can be appealing for both sexes.”

Even though most Swiss watch brands continue to promote so-called ladies’ collections, gender-defying influencers on social media — such as the watch and sneaker collector Madison Blank, a former head of men’s wear at Saks Fifth Avenue — are helping transform certain timepieces into de facto genderless styles.

“Rolex is the brand where we’ve seen this the most,” said Stephen Eggleston, vice president of commercial at the online luxury marketplace Farfetch. “Day-Dates, Daytonas, Submariners, Datejusts — all are watches being bought by women’s wear customers that would have historically been categorized” for men because they are 40 millimeters or larger.

Even Switzerland’s most masculine and traditional watch brands are coming around to bypassing gender. Last July, Hublot introduced the Big Bang Millennial Pink as an overtly “gender neutral” timepiece. And in September, Patek Philippe came out with the Ref. 7234G, a no-frills white gold Calatrava Pilot Travel Time in a new 37.5-millimeter format designed to have, the brand website said, “a subtle presence on the wrist.”

IWC Schaffhausen, which began using the promotional tagline “Engineered for men” in 2007 before quietly abandoning it about a decade later, has also embraced gender-free classifications.

“We prefer to think in design categories like sports watches or classic watches,” Franziska Gsell, IWC’s chief marketing officer, wrote in an email.

For Ms. Wong of Watch Femme, however, true gender parity will be achieved only when men feel as comfortable buying feminine timepieces as women feel indulging in masculine styles.

“It’s cool for girls to appropriate boys’ stuff, but not the other way around,” she said.

As an example, Ms. Wong mentioned a conversation she had on Clubhouse “with this really obnoxious guy.”

“He said, ‘Women can have the best of both worlds: They can wear a super feminine gem-set watch, and they can also wear a Royal Oak that’s super masculine, but men have to stick to men’s,’” Ms. Wong said.

“And I said, ‘Let me stop you right there — your credit card is not going to be blocked if you try to buy a woman’s watch,’” she said. “He just wanted me to admit women have it better. He wasn’t changing his mind.”

Winter Is Coming: 6 Loungewear Trends That Are Promising to Be Huge

If You Buy Just One Thing This Week, Make It These Absurdly Cheap Crest Whitestrips