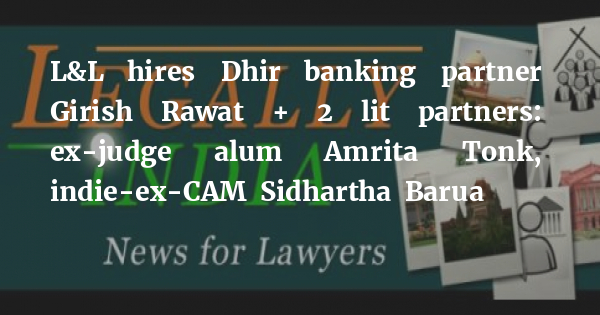 L&L Partners litigation partnership has hired two new partners while banking and finance has added one other.

Former Metropolitan magistrate (from 2013 to 2018), Amrita Tonk had begun her career at L&L in 2010, followed by a secondment at Accenture and then the bench.

According to the firm, “she presided over 26,000 summary and summons triable matters during her tenure”.

The second litigation hire is independent Delhi-based advocate Sidhartha Barua, who before going independent in 2019 had been a Cyril Amarchand Mangaldas partner between 2016 and 2017 followed by BTG Legal. The CLC Delhi University law graduate had also worked at AZB & Partners and P&A Associates.

Barua is joining in the team of Sudhir Sharma.

According to L&L, he “has represented several clients before the Supreme Court of India in landmark matters which laid down the arbitration jurisprudence in the country”.

In the banking and finance practice, L&L has added Girish Rawat as a partner, who was previously a partner at Dhir & Dhir Associates.

Rawat is a 2006 CLC Delhi University graduate and a qualified company secretary.

The L&L corporate firm, which is a separate partnership from the litigation firm, has still not concluded or settled the dispute between co-founding partners Rajiv Luthra and Mohit Saraf.