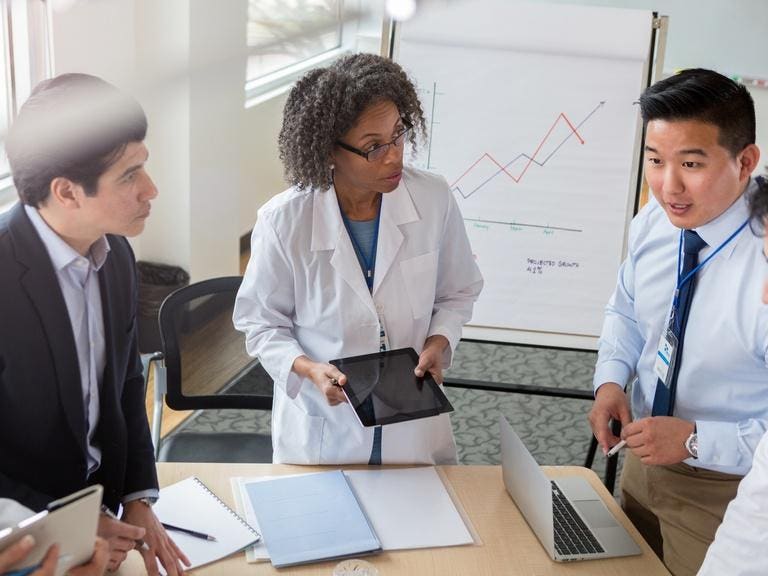 Who thought that this would be a good idea?

The JAMA Network recently posted a podcast entitled Structural Racism for Doctors: What Is It?” Things didn’t exactly get off to a rousing start when they promoted the podcast on Twitter. The tweet began with the words, “no physician is racist.” Exsqueeze me? Baking powder?

Remember when Julia Roberts said, “Big Mistake, huge,” in the movie Pretty Woman? Well, in general, it’s not the best idea to say, “no [fill in any profession] is racist.” After all, applicants to medical school, public health, and hospital positions haven’t had to go through a racism test that says, “you shall not pass. The nasal swab says that you are a racist.” Remember physicians come in all types and from many different mindsets.

Uché Blackstock, MD, founder and CEO of Advancing Health Equity, tweet-commented on the JAMA tweet that has since been deleted:

Sure, there are people who still believe that the Earth is not flat. But do you start a astrophysics podcast about the Earth simply by saying, “many people are skeptical about this Earth being a globe thing?” Or begin a climate science podcast about climate change by just stating that “many people are skeptical about climate change?” Surely, you should add a qualifier such as “despite numerous scientific studies showing evidence of climate change,” just in case people only read the tweet and the promo page.

As Paige Nong, a PhD candidate in Sociology and Organizational Studies at the University of Michigan, pointed out, scientific studies have already provided plenty of evidence of racism and structural racism in medicine:

Note that “utter nonsense” is not a positive review, unless, of course, the podcast was supposed to be about utter nonsense and entitled, “Utter Nonsense: What Is It?”

Whether there is racism and structural racism in medicine is not something that needs to debated any longer. The National Institutes of Health (NIH) now has an ”Ending Structural Racism” web page, acknowledging that racism is real and a problem. There have been numerous stories about medical students, physicians, and patients of color facing numerous challenges while trying to navigate the medical and health systems. Persons of color have filed lawsuits about facing discrimination in the medical system. Denying the existence of racism brings further pain and suffering to victims of discrimination.

In fact, the stories that have emerged publicly probably represent only the tip of the iceberg. Within the medical and public health systems, many persons of color may not feel comfortable or empowered to speak out about experiencing or witnessing racism for fear of retaliation. You only have to look at how few persons of color have made it to true leadership positions in hospitals, medical schools, and schools of public health. This despite the fact that since the 1970’s, medical school classes have had significant percentages of Asian Americans, Black Americans, Latino Americans, Native Americans, and other persons of color. Relatively few racial and ethnic minorities seem to have seats at the table on the editorial boards of major medical journals either.

Speaking of seats at the table, the two people who appeared on the podcast on “structural racism” were the host, Ed Livingston, MD, the Deputy Editor for clinical reviews and education at JAMA, and the guest Mitchell Katz, MD, the president and CEO for NYC Health + Hospitals and deputy editor for JAMA Internal Medicine. Yes, a podcast about “structural racism” did not feature a single person of color who has had to deal with structural racism, as the following tweet pointed out:

Hmm, isn’t that a bit like having a football broadcast without having anyone who, you know, actually played football? Imagine how that would go.

Tamara Saint-Surin, MD, an Assistant Professor of Medicine and Clinical Epidemiology at the University of North Carolina, observed that the host didn’t exactly have the strongest grasp of the subject matter:

How many football broadcasters don’t quite understand the concept of running on the field and tackling? Again, wouldn’t it have been helpful to have had someone who has actually experienced structural racism on the podcast on “structural racism?” Saint-Surin’s tweet thread continued by saying:

If it’s all just the environment of “their places” then why have medical students, doctors, and patients of color complained of facing discrimination in medical school, public health, and hospital environments? Why aren’t there more persons of color in leadership positions in medicine, health, and public health. Or on podcasts for that matter? Saint-Surin questioned why there seemed to be an interest in taking the word “racism” out of the conversation:

It’s not as if finding such experts would be like trying to find a Covid-19 vaccine now or toilet paper in March of last year. There are plenty of people who would want the opportunity to speak about the challenges that they have observed and faced. You just have to take an extra step to look for them. This would have a good opportunity to elevate the voices that have not yet been heard because of, ding, ding ding, structural racism.

Oh, and just in case you are still skeptical about the existence of racism in health care, look at a tweet from Arghavan Salles, MD, PhD, a bariatric surgeon and Scholar in Residence at the Stanford University School of Medicine. She pointed to a story from trauma surgeon Jamie Colman, MD, Associate Professor of Surgery at the University of Colorado School of Medicine, about what Coleman’s husband had to face:

You know the Alanis Morrissette song that goes “ isn’t it ironic?” Well, the JAMA podcast about “structural racism” ended up bringing broader questions about JAMA, including its stance about racism and the racial adn ethnic compositions of its editorial boards. For example, Stella Safo, MD, MPH, an Assistant Professor of Medicine at the Icahn School of Medicine at Mount Sinai, called for the following:

And Brittani James, MD, an Assistant Professor at the University of Illinois College of Medicine at Chicago and co-founder of the Institute for Antiracism in Medicine, circulated a petition:

As you can see, the petition stated that “JAMA’s key objective is to promote the science and art of medicine and the betterment of public health. The release of this podcast blatantly contradicts JAMA’s cited objective. It is imperative that the executive leadership of JAMA act to rectify this harmful incident and examine the infrastructural makeup that allowed this podcast to pass many stages of evaluation before release.”

The petition also called for a “formal review of the leadership displayed by Dr. Howard Bauchner as editor-in-chief, including actions suggesting a failure to diversify the editorial staff and/or displaying blatantly discriminatory behavior patterns.”

As indicated earlier, JAMA has deleted the original tweet about the podcast. Baucher issued the following statement as well:

Well, the podcast may end up bringing more attention to existing structural racism, perhaps not in the way that the producers and host of the podcast originally intended. Debating whether racism and structural racism exists in medicine would be like debating whether the Earth is really a globe or whether pollution is bad or whether climate change really exists. The first step to solving a problem is fully acknowledging its existence. Medicine should be beyond this stage. It is now time for solutions and everyone to look at how they themselves may be contributing further to racism and structural racism in medicine. As has been said over and over again, if you are not part of the solution, you are part of the problem.