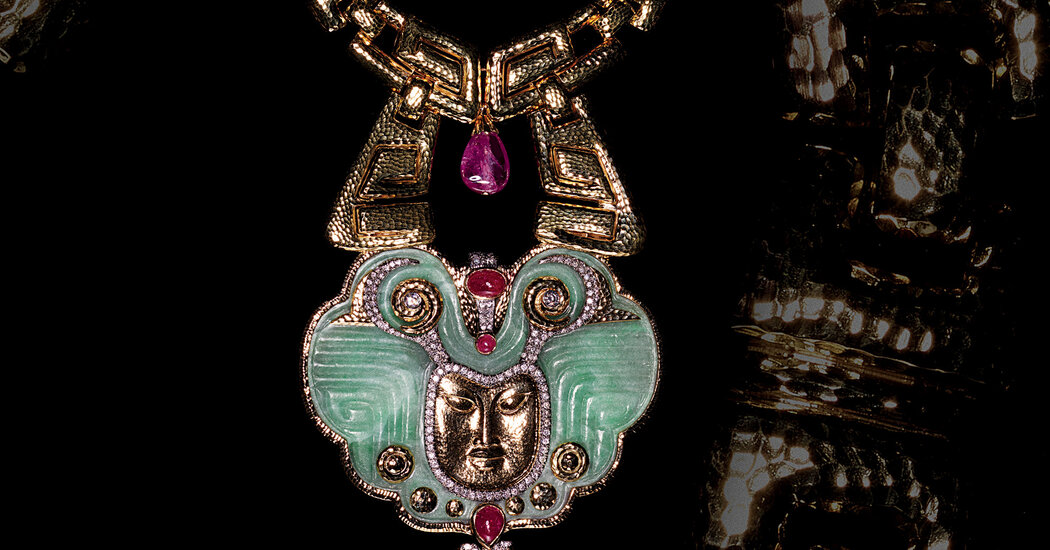 Born in 1925 in Asheville, N.C., the jewelry designer David Webb began his career at 14 as an apprentice at his uncle’s silversmith workshop, soldering brooches and copper ashtrays. When he turned 17, Webb moved to Manhattan and took a job as a repairman in the city’s diamond district before setting up his own store on 47th Street in 1948. There, he sold giant enameled cocktail rings and earrings in the shape of snail shells, tigers and frogs, studded with sapphires, emeralds and rubies. His designs quickly caught the eye of discerning ladies of the moment like Doris Duke and Wallis Simpson, the Duchess of Windsor.

A lover of antiquities who considered a career in archaeology, Webb visited the Metropolitan Museum of Art weekly until his death in 1975, spending hours gazing at jewelry made by the ancient Egyptian, Chinese and pre-Columbian civilizations. The designer often made pieces inspired by these artifacts, including, most notably, a 1972 commission for a client in Detroit. She asked Webb to create a necklace featuring an antique carved jade plaque pendant. Webb embellished it with large dangling rock crystal drops and added an oversize hammered-gold chain with an interlocking scroll motif reminiscent of Cycladic and Mayan adornment.

Forty-nine years later, the house’s atelier on Madison Avenue is paying homage to Webb’s triumph. The Dreamer Necklace’s gold face surrounded by antique sea-foam-green carved jade is a tribute to the original pendant, while pear-shaped ruby cabochons and beads set among brilliant-cut diamonds add a touch of modern drama. The piece hangs from a familiar scrolled hammered-gold chain, a design that has become a brand signature — and a symbol of the house’s link to both ancient history and the future.