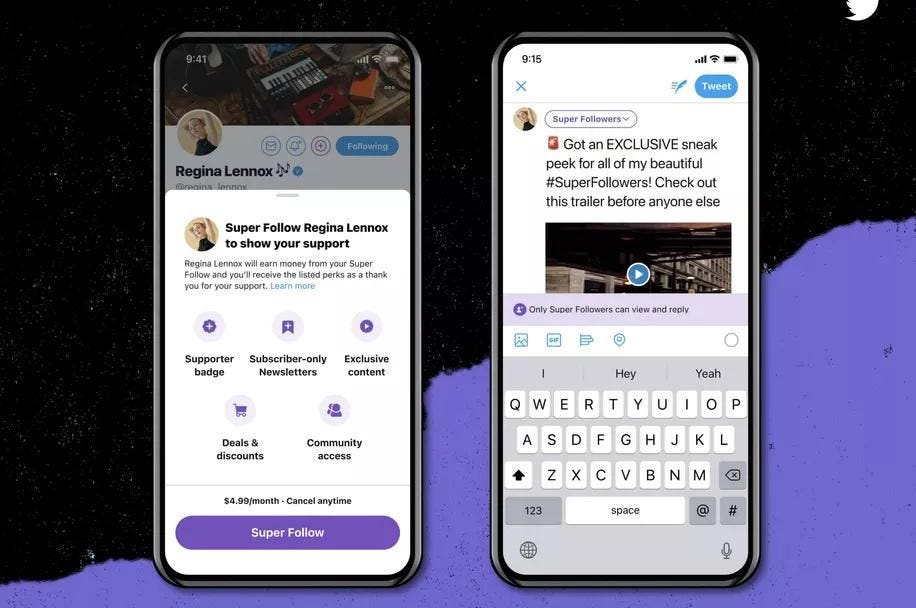 Would you pay to read the tweets of select individuals? That is, is there someone you follow on Twitter that is worth paying directly for that sweet tweet content? Someone that isn’t already a well-compensation celebrity? Twitter is hoping the answer is yes, as it announced an upcoming feature called Super Follows. Super Follows is ego incarnate. No single user on Twitter is worth paying for. Yet, there are possibilities that could make this a viable option for some.

This is not what I had in mind all those times I less-than-subtly suggested Twitter consider moving to a paid model in order to attempt to remove the layers of filth from its platform. An overall subscription model kind of makes sense, most of us whom are addicted to making the tweets would gladly pay five bucks a month to continue to do so.

Subscribing to individual tweet creators as we would a streamer on Twitch or an artist’s Patreon will clearly benefit those who already have large followings, or some semblance of celebrity. For most of us, it’s not a feasible solution to a long-standing problem with Twitter. Most of our crappy hot takes aren’t worth a super follow, much less a regular one. Muting often seems the more natural option rather than the enthusiasm for that particular content that would justify a Super Follow.

For most of us, Twitter is a garbage repository for our dumb ideas, super steaming hot takes, terrible puns, and middling musings that today is not Friday. For many others, it is a sales funnel pushing users to some sort of something that offers a paid product or service. With Super Follows, that funnel could be shorter, offering some sort of immediate perk in exchange for that kind of subscription. What that perk is, at this point, I have no idea, just that it would have to be something viable enough to justify subscribing to an individual or brand.

At its analyst and investor meeting at which it announced Super Follows, Twitter also announced that it is working on a feature called Communities. This feature will be a direct riff on Facebook Groups, which is a good thing for all of us. For as bad as Twitter seems to be some days, Facebook is an absolute hell-scape of misinformation, hate and pure insolvent nonsense. Creating groups on Twitter actually seems like a good idea, since the constantly active nature of the platform lends itself well to grouping interests and communicating in that format.

There’s no timeline for either of these features, though Twitter users are already getting worked up about the possibility of attempting to charge for their slimy tweets. It would still make more sense for Twitter to simply charge for the service, forcing a higher level of verification, putting the anonymous trolls out into the cold, but that seems to be stuck in the bin of social media hypothesis at the moment. Meanwhile, at least with Super Follows we can amp up our delusions of grandeur until the feature rolls out and we get smacked with the reality of our social irrelevance.