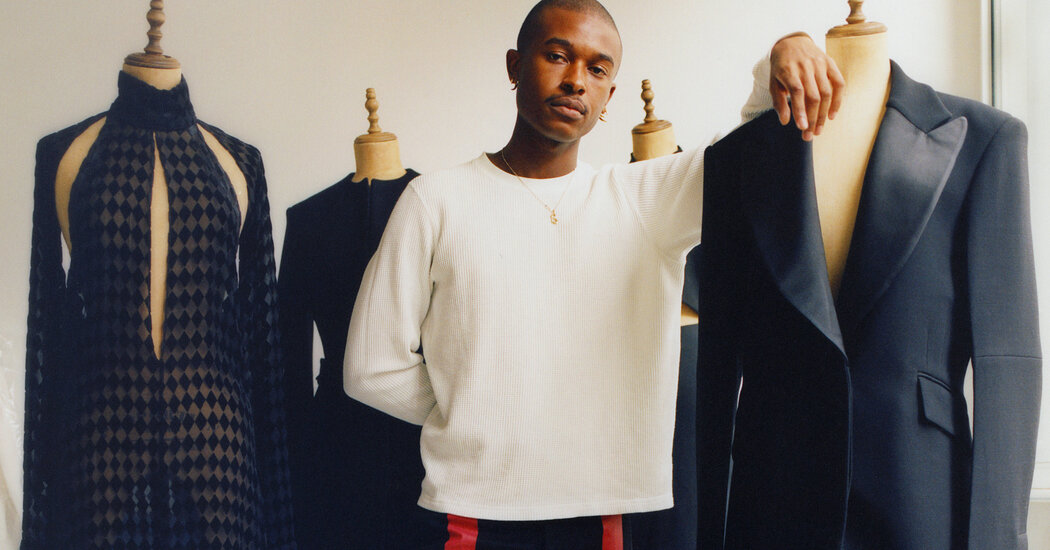 Maximilian Davis grew up in Manchester, England, in a lively, close-knit family for whom fashion was a shared interest. His mother had modeled in the ’70s, and both his father and older sister studied clothing design before pursuing other careers. Davis himself was just 6 when his maternal grandmother taught him how to use a sewing machine. She also instilled in him the importance of “using clothes to represent who you are,” he says. “She always made an effort. She would wear the most colorful embroidered nightgown, spray herself with perfume before bed and say, ‘If I die in my sleep, I want to smell nice!’” Seeing her in her Sunday best for church also left an impression. “It was the one moment where the Black community in our area would really get dressed up,” Davis, now 25, recalls. “There was something joyous about that.” It was fitting, then, that his first collection for his namesake line, which debuted last September to critical acclaim, was a tribute to his grandmother, who died in 2017.

Davis left Manchester in 2014 to study women’s wear design at the London College of Fashion. Not long after, he met the designer Grace Wales Bonner while they were both working at the department store Selfridges, and he joined her then-nascent team as a fit model and intern, eventually becoming a junior designer. In 2018, the year after his graduation and his grandmother’s death, he stepped away from fashion. “I needed time to figure out what I wanted to do,” he says. But the urge to start sketching returned, and so, in 2019, he decided to make a small collection of six looks under his own name, working with his friend, the stylist Ib Kamara. Then came the pandemic, which put an end to their plans to shoot the pieces and prompted Davis to apply for a place with the influential talent incubator Fashion East. Much to his surprise, he was accepted.

With the platform’s support, the collection grew to 18 looks and was presented via a digital showcase last fall. It was one of the most talked-about moments of the season, and the brand has since been picked up by retailers such as Net-a-Porter, Ssense and Browns. “I was overwhelmed by the response,” Davis says. Named J’ouvert, after the early-morning street party that traditionally kicks off Carnival, the collection drew inspiration from his late grandmother’s Trinidadian heritage and the island’s annual celebrations. Davis’s research also led him to the 18th-century abolitionist Jean-Baptiste Belley and the work of the Italian painter Agostino Brunias, who depicted West Indian life and the emergence of Creole culture in the 1770s. Davis reworked these historical references with a contemporary sensibility, creating an interplay between formal refinement and overt sexiness. He reimagined aristocratic cravats as unisex halter tops and paired ivory frock coats with asymmetric white miniskirts. And then there was the Highway gown, so called because its plunging neckline and cutout back resemble Trinidad’s curving freeways.

Thus Davis joined a wave of London-based designers that includes his good friend Mowalola Ogunlesi, as well as Supriya Lele, Priya Ahluwalia, A Sai Ta and Davis’s mentor, Wales Bonner, who are working to expand the range of narratives represented in fashion. Each has their own distinct aesthetic, but what unites them is a commitment to craft and to exploring their respective cultural heritages. From Wales Bonner, Davis also picked up a scholarly approach: “I learned so much from her,” he says. “She would look at literature or film — it could be anything really. And so research is a very organic process for me now.”

His second collection, which launches today, is proof of this. It incorporates references to sources as disparate as the art of the 20th-century Trinidadian dancer and painter Boscoe Holder, the disco music of Donna Summer and the exuberant images of ’60s-era nightlife captured by the celebrated Malian photographer Malick Sidibé, which makes for a wide-ranging representation of Black joy. Another starting point were Davis’s own memories of visiting Trinidad as a teenager with his older sister and, as he recalls, “going from the beach to the club” — an idea evident in a white Lycra swimsuit designed to be paired with a skirt or trousers in the evening. His recollections even influenced his choice of fabrics: In addition to pieces made from luxurious silks, melton wool and satin there is a waistcoat and matching pair of pants in a crackled charcoal gray leather that evokes not the beach or the club, but his grandparents’ Chesterfield sofa. Meanwhile, a backless black devoré evening gown nods to their living room throw pillows. “Velvet was something Caribbean households would use to connote luxury,” Davis says. “I wanted to play on that and make something super chic.”

Also new this season is an exploration of the couture techniques and shapes of two designers Davis has long admired: Cristóbal Balenciaga and Paco Rabanne. Their influence is seen, respectively, in the almost monastic simplicity of a black single-seamed wool evening dress paired with leather opera gloves, and in a white batwing-sleeved wool jacket manipulated with darts to gently flare at the waist. Both of those men were popular in the ’60s, but that fashion era was also characterized by a dearth of prominent Black models, something Davis wanted to work against. On his mood board he pinned photographs of Donyale Luna, who graced the cover of British Vogue in 1966 and is widely regarded as the first Black supermodel. She also appeared in the American filmmaker William Klein’s fashion industry satire “Qui êtes-vous, Polly Maggoo?” (1966) which features new-age looks that inspired Davis’s A-line satin miniskirts and wool balaclavas, as well as a black-and-white silk bodysuit printed with a psychedelic interpretation of his name.

The designer’s overall aim for his brand, he says, is to show that “Black elegance exists.” Releasing his first collection last fall, after a summer defined by protests for racial justice, “felt like the right time,” he says. “It gave me more confidence to do what I believed in. It felt like there was so much portrayal of Black people in a negative light, and that we weren’t in charge of our own narratives. I wanted to see people of color presented in an elegant way.” An example of Black elegance that Davis returns to again and again is a YouTube video of Nina Simone singing “To Be Young, Gifted and Black” in 1969. “It’s the power of that performance that I want to give to people,” he says. “She feels so at ease, and so confident in herself.”