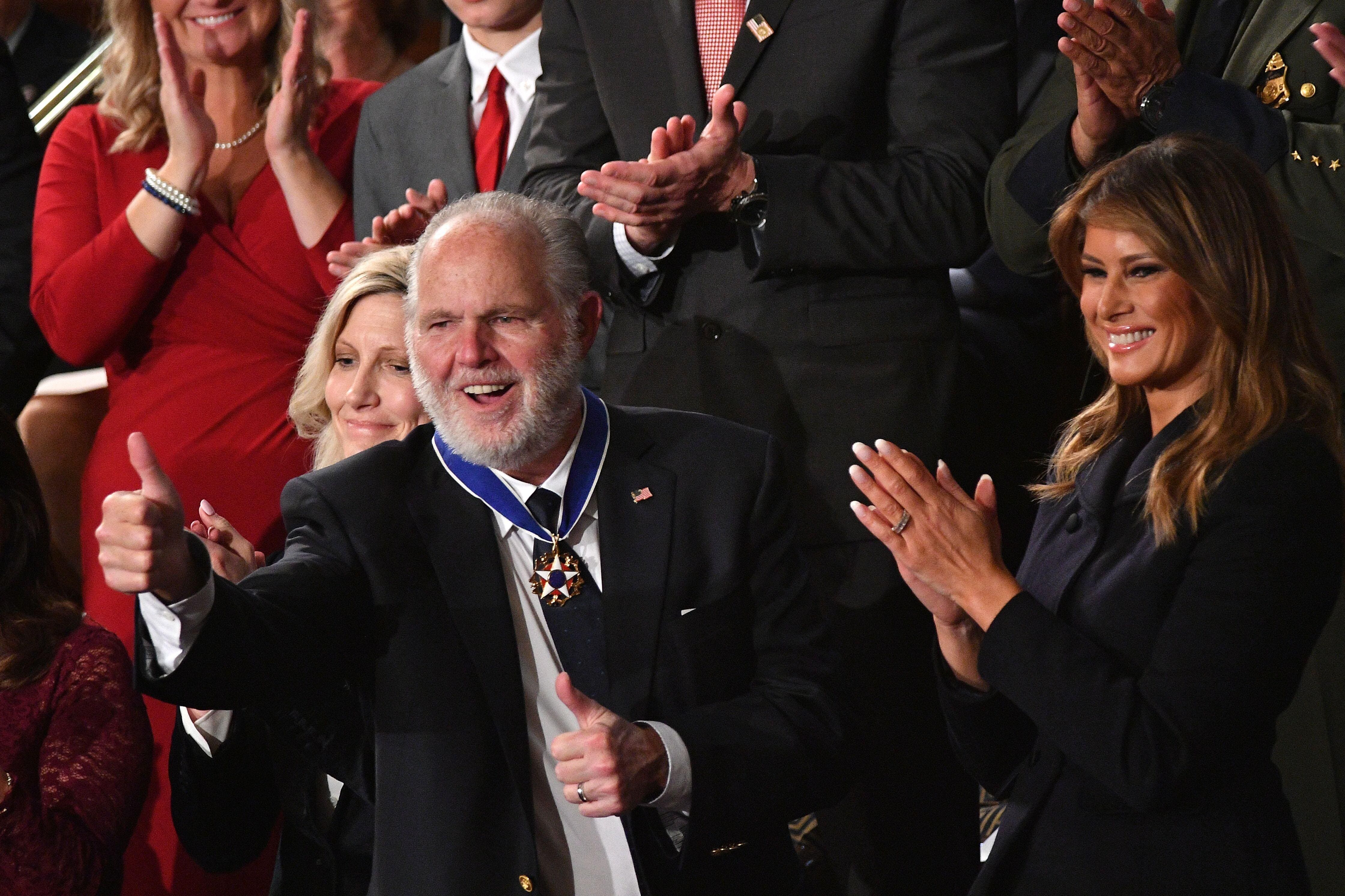 He had been diagnosed with Stage IV lung cancer in January 2020, and just days later was awarded the Presidential Medal of Freedom by then President Donald Trump during last year’s State of the Union address.

“Rush Limbaugh: Thank you for your decades of tireless devotion to our country,” President Trump said during the address.

Since the launch of “The Rush Limbaugh Show” in 1988, Limbaugh became arguably one of the most beloved yet polarizing figures in American media. Beginning with just 56 radio stations, his show grew to be the most listened-to program in the United States. Limbaugh’s passing comes just a week after another equally divisive media figure, Larry Flynt, passed away – and the reactions on social media highlighted the divide in our country.

Across social media on Wednesday, Limbaugh’s supporters hailed his efforts to support conservative causes, whilst his critics only saw the worst in the radio talk show host.

Fellow conservative commentator Ann Coulter (@AnnCoulter) was among the first to react to the news of Limbaugh’s passing, “So sad. The Super Nova of American conservatism is dead. R.I.P. Rush Limbaugh”

Likewise, commentator Lou Dobbs (@LouDobbs) hailed Limbaugh’s lengthy career, “Broadcast Legend Rush Limbaugh has died. His legions of fans will miss him, and his powerful and bright contribution to our national dialogue is a treasure that will endure for decades to come. Rush Limbaugh, a great American, dead at 70. God bless you Rush.”

Many on the right side of the aisle in government expressed their feelings on Wednesday afternoon. Among those was Sen. Rand Paul (R-Kentucky) (@RandPaul), who tweeted, “RIP to a legend and a patriot, Rush Limbaugh. Not many people can say they revolutionized and stayed at the top of an industry the way he did. My condolences to his family.”

Sen. Marsha Blackburn (R-Tenn.) (@MarshaBlackburn) posted simply, “Rush Limbaugh was an inspiring and important voice for the conservative movement. He will be missed dearly. My sincere condolences to the Limbaugh family.”

Former Secretary of State Mike Pompeo (@mikepompeo) shared his thoughts on what Limbaugh brought to U.S. politics, “Rush Limbaugh made conservatism popular with the entire nation and revolutionized conservative media. He will be missed by all of his ‘ditto heads,’ this one included. Our country has lost one of its most important voices. Sending prayers to the Limbaugh family.”

Not unexpectedly, many critics of Limbaugh expressed glee at the talk radio icon’s passing with hate filled comments. If Limbaugh was divisive in life, the reactions by many liberals of his death on social media certainly were clear.

There were also attempts at humor at the passing of Limbaugh, and clearly he wasn’t afforded any respect by some. That included comedian/writer Mike Drucker (@MikeDrucker) who posted, “It’s easy to make fun of Rush Limbaugh right now, but it’s important to remember that he also brought a lot of people a lot of joy by dying”

A similar joke was offered by writer/historian Natalie Shure (@nataliesurely), “However you feel about Rush Limbaugh, you’ve gotta admit that he’s dead”

David Axelrod (@davidaxelrod), senior political commentator from CNN, offered, “Whether you loved him or hated him-and there are very few people in between-Rush Limbaugh was indisputably a force of historic proportions. Over the past three decades, he did as much to polarize our politics as anyone and laid the groundwork for Trump and Trumpism.”

But perhaps J. Charles Stanley (@JCharlesStanle1) summed the news of Limbaugh’s passing best, “Say what you will about Rush’s politics, but he definitely was highly successful in building his brand.”

Diverse Audience For Virtual Training? 10 Tips To Improve Inclusivity And Diversity In Imagery And Voice-Over