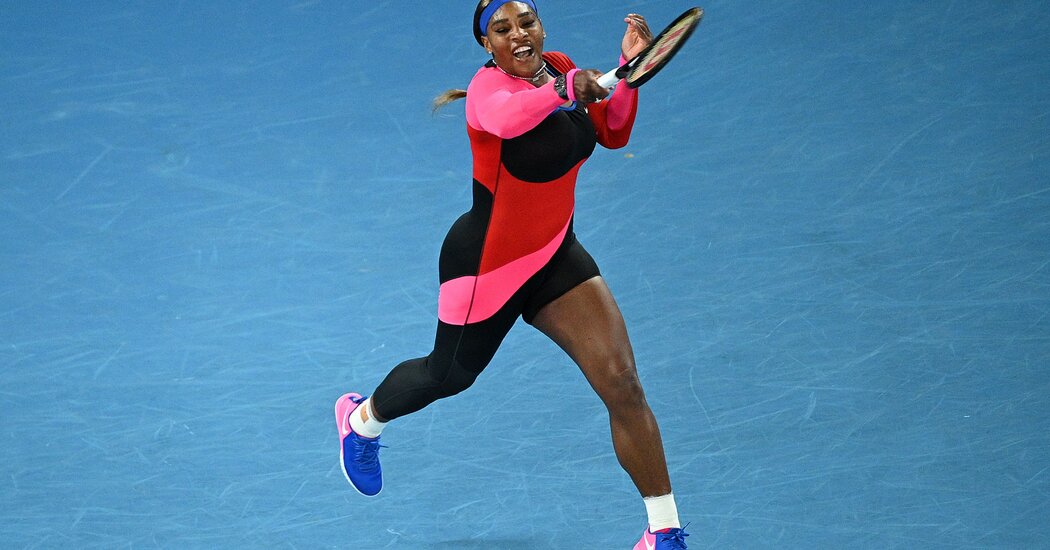 The last time Serena Williams wore a full-body catsuit to a Grand Slam tournament, back in 2018 at the French Open, it practically caused a revolt.

The Gallic tennis powers that be were so shocked by the replacement of the classic little white dresses — if female tennis wear can even be called “dresses” given that they are shorter than most tunics — with a black Nike bodysuit, they didn’t just clutch their breasts in horror, they actually instituted a dress code that specifically barred such outfits. “One must respect the game and the place,” Bernard Giudicelli, French Tennis Federation president, stated.

But then, of course, Ms. Williams did it again, opting for a short onesie at the Australian Open in 2019, a look that recalled her first appearance at the U.S. Open in 2002, when she wore a short black bodysuit (she was then sponsored by Puma). That look became something of a lightning rod and a seminal moment in the conversation around women’s bodies — especially Black women’s bodies — tennis, power and who gets to police all of the above.

And now, playing at the height of her powers in the semifinals of the Australian Open, chasing her record-breaking 24th Grand Slam and defying all odds, she is wearing one yet again. This time, it is even more eye-catching: an asymmetric, one-legged, graphic pink, red and black color-block catsuit.

Even in the wilder fashion context of the Australian Open, where players have historically felt freer to express themselves in clothes on court — even in the context of Ms. Williams’s own tennis dress history, which has included a pleated denim skirt with studded vest top and a tutu — it was an unmistakable statement of intent.

She has, and is, forever changing the game. In more ways than one.

Ms. Williams said the style of this particular court catsuit was a homage to Florence Griffith Joyner, the track star and three-time Olympic champion known as Flo-Jo, who famously won her 1984 Olympic silver medal in a one-legged catsuit. Ms. Griffith Joyner also famously loved nail art and incorporating fashion into her running uniforms (which were, in fact, the opposite of “uniform”).

Drawing that direct line to another great Black athlete during Black History Month expands the impact (and import) of Ms. Williams’s choice beyond the court, making it even more considered. Flo-Jo believed in the power of self-expression as a form of strength, and the assertion of one’s place in the world. Ms. Williams lives that, too.

After all, she originally wore the black catsuit in part because she was suffering from blood clots after her pregnancy, and she said the compression of the full-body look helped address the problem. She also said (during a match news conference) that it made her feel “like a warrior in it, a warrior princess” — “from Wakanda, maybe.”

This at a time when many prognosticators were opining on how difficult it was for women to come back to global tennis domination after childbirth. Ms. Williams was determined to prove them wrong and to set a new precedent. Her choice of court attire simply made it obvious — and impossible to ignore.

But the fact that she kept doing it after the initial hoo-ha transformed what could have been a momentary kerfuffle into a cause. After all, the first catsuit worn on-court was modeled by Anne White, who wore a … well, white, style to play her first round game at Wimbledon in 1985. That prompted the tournament official to suggest she wear a different outfit the next day. She bowed to that pressure, and that was the end of it until Ms. Williams appeared in her version not quite two decades later.

Ms. Williams, however, didn’t just double down on her original look. She tripled down on it. And according to the rule of change, one example of anything is a fluke, two is a coincidence, and three is a trend.

So what is this trend about? It’s not just about the garment itself. It’s about allowing female players agency over their on-court choices, and about breaking down old stereotypes about what is and is not appropriate for women to wear. And who gets to decide.

For decades, tennis style was rooted in an arcane idea of femininity, even as other sports left such clichés behind. It has slowly been dragged into the 21st century. Ms. Williams is simply turbocharging the process and forcing everyone to grapple with the issue, from officials to viewers.

Indeed, thanks to the French Open absurdity, the Women’s Tennis Association created a new rule specifically stating, “Leggings and mid-thigh length compression shorts may be won with or without a skirt, shorts, or dress.”

This far, this time around, the catsuit has been met with a pretty positive response. “Greatness inspiring greatness” is the general feeling. As Ms. Williams has progressed through the tournament, it has become a sort of supersuit: a symbol of not just her physical strength but her strength of character.

As a result, whatever happens with her match against Naomi Osaka, the catsuit, in the words of one viewer, “has already won everything.”

“I’ve always wanted to be a superhero, and it’s kind of my way of being a superhero,” Ms. Williams said at that news conference back in 2018 when she wore the black catsuit. She is that, among so many other things. But she is also, it is increasingly apparent, the Amelia Bloomer of tennis.

SEO News You Can Use: How Is Google’s November 2021 Core Update Affecting Rankings So Far?