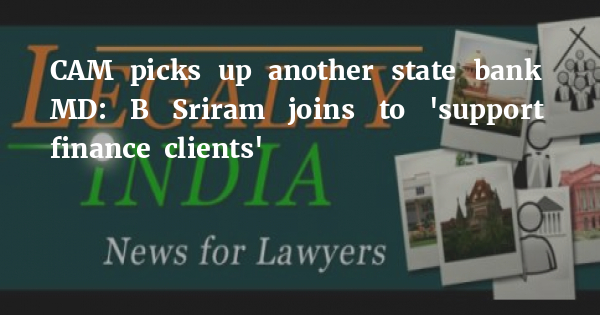 Former managing director of State Bank of India (SBI), B Sriram, has joined CAM in Mumbai as a senior advisor.

According to CAM, Sriram:

[…] has held Board positions in various financial subsidiaries of SBI including SBI Life Insurance, SBI General Insurance, SBI DFHI, SBI Global Factors, SBICap Securities and SBI Cards & Payment Services. He was also a Nominee Director representing State Bank of India on the Boards of invested companies. Mr. Sriram led the Integrated Treasury of SBI from March 2008 to September 2011. He headed SBI’s largest Retail Circle in Delhi from October 2011 to February 2013. During 1997-2001, he was posted to SBI’s foreign office in Singapore with responsibility for Information Technology. From 1992 to 1997 he was responsible for Corporate Finance, Syndications and Project Appraisal at SBI Capital Markets, Mumbai.

CAM managing partner Cyril Shroff said in a press release: “The firm has very strong professional relationships with banks, financial institutions (both domestic and international) and financial investors. His presence will strengthen our offerings and further enhance our capabilities to support our financial institution clients.”

Sriram added that he hoped to “contribute and boost” CAM’s “capabilities to support its financial institution clients”.

As we had previously pointed out, firms and in particular AZB and CAM, have liked hiring from government banks: