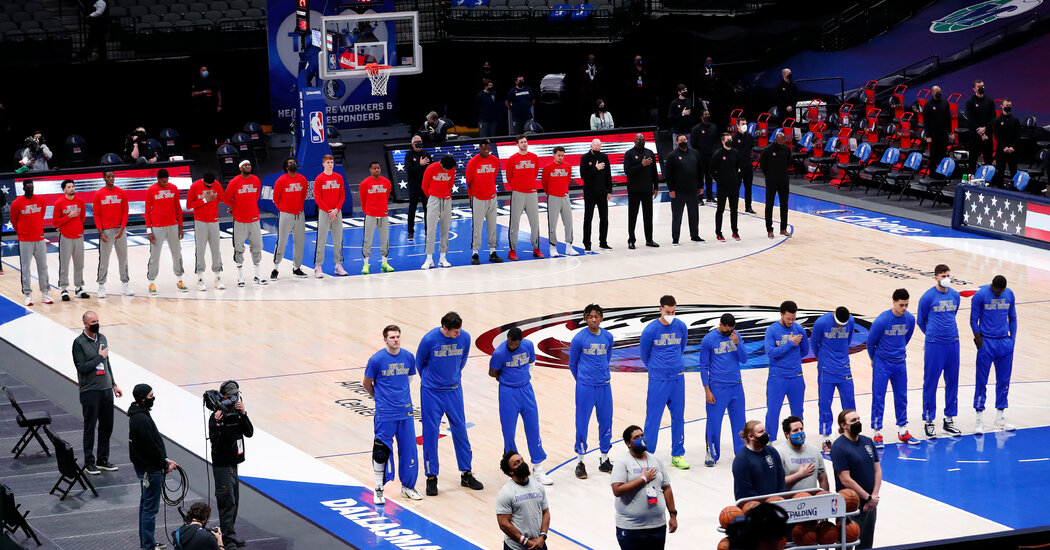 In the United States, the national anthem, “The Star-Spangled Banner” by Francis Scott Key, is often performed before sporting events, school functions and other important events. Think about the last time you attended or watched an event on TV where the anthem was played. How did you feel hearing the song? Were you moved by the performance and the lyrics? Did you stand or remove your hat? Or did you feel uncomfortable or unaffected by the song?

If you live in another country, when is your national anthem usually played? How do you feel when you hear it?

Recently, after the Dallas Mavericks had stopped playing it through their first 13 preseason and regular-season home games, the N.B.A. began requiring teams to play the national anthem before games. It was an abrupt reversal of an earlier hands-off approach. In “N.B.A. Says Teams Must Play the National Anthem,” Marc Stein explains:

Cuban told The New York Times on Wednesday that the Mavericks would follow the policy immediately and play the anthem before that night’s nationally televised home game against the Atlanta Hawks at American Airlines Center.

“We are good with it,” Cuban said.

Most players and coaches regularly knelt during the national anthem to protest social injustice while the league played out the last three months of the 2019-20 season at Walt Disney World near Orlando, Fla., last summer. Adam Silver, the N.B.A. commissioner, said in December that the league did not intend to enforce its rule that players stand for the national anthem. The league’s 29 teams apart from Dallas had mostly played recorded versions of the anthem before games.

“I recognize that this is a very emotional issue on both sides of the equation in America right now, and I think it calls for real engagement rather than rule enforcement,” Silver said in December.

In a statement released through the Mavericks, Cuban said: “We respect and always have respected the passion people have for the anthem and our country. But we also loudly hear the voices of those who feel that the anthem does not represent them. We feel that their voices need to be respected and heard, because they have not been.

“Going forward, our hope is that people will take the same passion they have for this issue and apply the same amount of energy to listen to those who feel differently from them.”

Why do some feel that “The Star-Spangled Banner” does not represent them? In “African-Americans and the Strains of the National Anthem,” an Opinion essay from 2018 written in response to the N.F.L. player Colin Kaepernick’s original anthem protest, Brent Staples writes:

African-American anthem dissidents are heirs to a venerable tradition of critical patriotism that dates to what W.E.B. Du Bois termed “double consciousness” — the feeling of being part of the American polity yet not fully of it. This insider-outsider status has driven a longstanding struggle among black Americans to find room in a civic and political system that was built to deny them full citizenship.

The “Star-Spangled Banner” itself has been a subject of that struggle since shortly after Francis Scott Key, a slave-owning Washington lawyer, wrote it to commemorate an American victory over the British during the War of 1812. The song would no doubt have been lost to obscurity had the United States military not appropriated it for flag ceremonies beginning in the late 19th century.

This history seems innocuous enough until one considers that the song tightened its grip on the country during the height of the lynching era in the South and became popular at baseball games at a time when African-Americans were barred from white baseball.

This connection was not lost on the great newspapers of the Negro press, in whose pages the song was referred to as “the Caucasian national anthem.” Black columnists discredited the song by unearthing a long suppressed third stanza (“No refuge could save the hireling and slave/From the terror of flight or the gloom of the grave”) that can be read as reflecting the composer’s embrace of slavery and the anger felt toward British officers who used the promise of emancipation to recruit enslaved African-Americans.

By the early 20th century, African-Americans were already turning their backs on the “Star-Spangled Banner” in favor of “Lift Every Voice and Sing” — known as the Negro national anthem — written by James Weldon Johnson and his brother, John Rosamond Johnson. Passages like “We have come, treading our path through the blood of the slaughtered” acknowledge the place of lynching and slavery in the national history.

Students, read both articles, and then tell us: