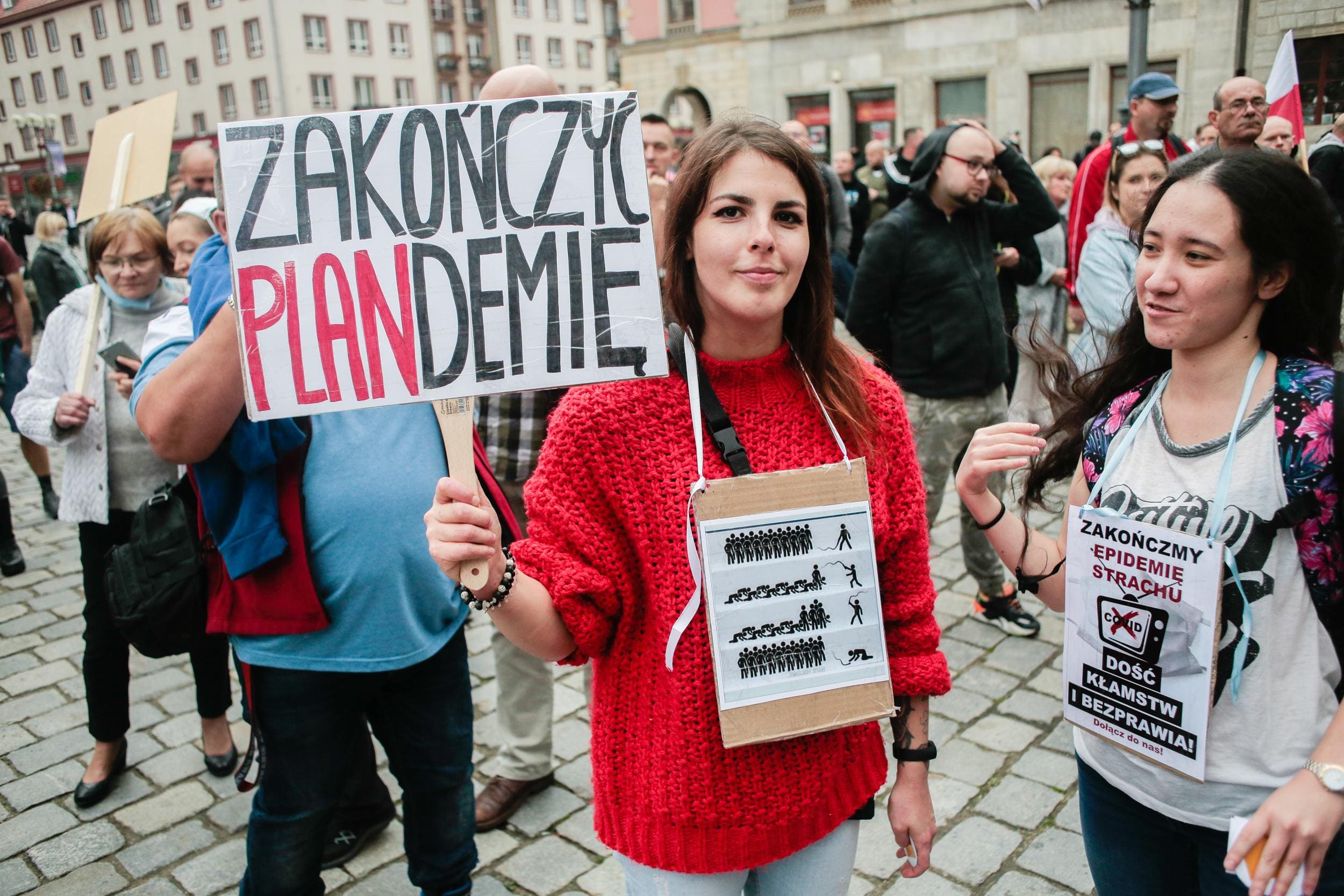 The name of the video is “Planet Lockdown,” not “Planet Conspiracy Theory” or “Planet Hollywood.” However, the Covid-19 pandemic storylines being advanced by “Planet Lockdown” seem straight out of Hollywood-eque movie fiction. Nevertheless, despite making a number of baseless claims, trailers of this video have been, surprise, surprise, spreading on social media, getting over 20 million views and engagements since late December, according to Katie Shepherd writing for The Washington Post.

Yep, if you were waiting in anticipation for a sequel to the video “Plandemic,” just like you were waiting for “Deuce Bigalow: European Gigolo” after watching “Deuce Bigalow: Male Gigolo,” you are in luck. You may recall that the “Plandemic film, which made its rounds last Spring and Summer, suggested that the whole Covid-19 coronavirus pandemic was somehow planned. Hence, the name “Plandemic,” which is a mash-up between “plan” and “pandemic,” sort of like how a “hedge fund” is clearly a investment vehicle run by hedgehogs. The “Plandemic” video was akin to a conspiracy theory granola bar, chock full of claims without providing much backing scientific evidence. Well, in case you’ve been saying, “there just aren’t enough conspiracy theories going around these days,” you now have “Planet Lockdown.”

“Planet Lockdown” is not officially a sequel to “Plandemic.” This isn’t the Marvel Cinematic Universe in which Captain Marvel with a younger-looking Nick Fury without an eye patch clearly comes before the Avengers movies where Fury sports an eye patch. It’s also not easy to tell who actually wrote, produced, directed, financed, and served as best boy and key grip for “Planet Lockdown.” Like many conspiracy theories, there isn’t a clear originator of the theories offered by the video.

Even the name “Planet Lockdown” is conspiracy theory-esque. Such a name probably is better at stoking fear than something like “Bridget Jones’s Diary.” Saying “Planet Lockdown” conjures up images of the entire Earth going under lockdown, which no one seems to be really advocating right now. In fact, real public health experts have been emphasizing that lockdowns should not be used a primary means to control the Covid-19 coronavirus, as I described previously for Forbes. Instead, lockdowns are a bit like pooping in your pants, done as a temporary measure in an emergency, especially when you have already failed to employ other preventive measures and need a time out to re-group. Plus, when’s the last time all the countries around the globe coordinated with each other on anything? If we can’t even all agree that one-leg catsuits make absolutely no sense, how can you expect the entire world to work together closely and coordinate actions so secretly?

The film features an All-Star cast of “who?” and “huh?” There’s Carrie Madej, DO, who has a history of making claims such as “the Covid-19 vaccines are designed to make us into genetically modified organisms” and will “hook us all up to an artificial intelligence interface,” as reported by Jack Goodman and Flora Carmichael for BBC. And take a wild guess as to where Madej was on January 6, the day that pro-Donald Trump rioters stormed the U.S. Capitol Building. Talking at a scientific conference? No, the Viking horns, animal pelts, and calls to overturn a U.S. election aren’t excatly what you see at a typical scientific conference. Instead, Madej was speaking at Trump’s MAGA Freedom Rally D.C., as Jesse Hicks described for VICE, which was to science what heavy moaning is to music. Was she preaching caring for each other and doing what you can to prevent the spread of the severe acute respiratory syndrome coronavirus 2 (SARS-CoV2)? Kind of, if by “kind of,” you mean no. Instead, Madej was telling attendees that the Covid-19 vaccine “is a witches’ brew. I’ve never seen anything like this in science or medicine.” Note, “witches brew” is not a medical term.

Then there’s Catherine Austin Fitts, who has served as an assistant secretary of housing and urban development for President George H.W. Bush, appeared on Alex Jones’ Infowars multiple times, and written for Robert F. Kennedy’s Children’s Health Defense. While the name Children’s Health Defense may sound like an organization that makes missile warning systems for children, Maanvi Singh for The Guardian describes it as “a group that baselessly ties chronic childhood conditions to a number of factors including vaccines.” In the video, Fitts alluded to a “committee that runs the world” that she called “Mr. Global.” This is a bit different from the “Mr. Vain” that the Culture Beat referred to in its 1993 dance song. According to Fitts, “Mr. Global” is utilizing the Covid-19 coronavirus pandemic to grab further control of you and others around everyone, possibly by injecting microchips via the Covid-19 vaccines. Those Covid-19 vaccines will “modify your DNA and for all we know make you infertile,” as well. Yep, that’s what she said. Oh, and, by the way, Fitts claimed that “massive voter fraud” occurred during the 2020 Presidential Election.

With many different real scientists and public health experts around the world, this is the crew that the movie has collected? It would like making a film about football and just recruiting people with feet and some balls. The lead characters in the video didn’t seem to have that much diversity either, of opinion, as well as of racial, ethnic, and educational background.

As alluded to earlier, lack of real evidence supporting its claims hasn’t kept the video from spreading. Facebook, Instagram, TikTok, and YouTube have been attempting to scrub their platforms of the video. Yet, copies of the video keep re-appearing like crabs, not the delicious for dinner kind but the sexually transmitted kind. The Media Matters for America website describes how far “Planet Lockdown” has gone. There has been multiple reuploads on YouTube and Vimeo, hashtags on TikTok like #PlanetLockdown” and #catherineaustinfitts,” and translations of the video into other languages such as German, Italian, Polish, Swedish, and Russian. Looks like reuploads of the video may have ads, suggesting that YouTube may have made ka-ching, money from the video. There has been a GoFundMe effort to support the video as well. Infowars has praised the video too, in case you regularly use the Infowars website to determine what to watch and how to go about your daily lives.

Folks, this doesn’t sound like your typical organic sharing of a video like when that video of an attorney who couldn’t remove a kitten filter on Zoom went viral. No, this more like a concerted effort to get “Planet Lockdown” and its theories spread. And while a kitten filter may not have too many bad consequences, spreading conspiracy theories about the pandemic can have many different dire effects. Many people have been suffering and dying from the SARS-CoV2. Response to the pandemic from political leaders like the Trump Administration ranged from inadequate to really inadequate. Inability to contain the virus has lead to widespread harm, not just medically but socially and economically. Conspiracy theories can be ways of distracting from the failures of political leaders, selling alternative products, or pushing for particular agendas such as fully opening businesses before its safe to do so. Conspiracy theory film can help plant alternative ideas in your head without really providing facts or evidence. Maybe instead of “Planet” or “Plandemic” a more appropriate name would be “Plant.”