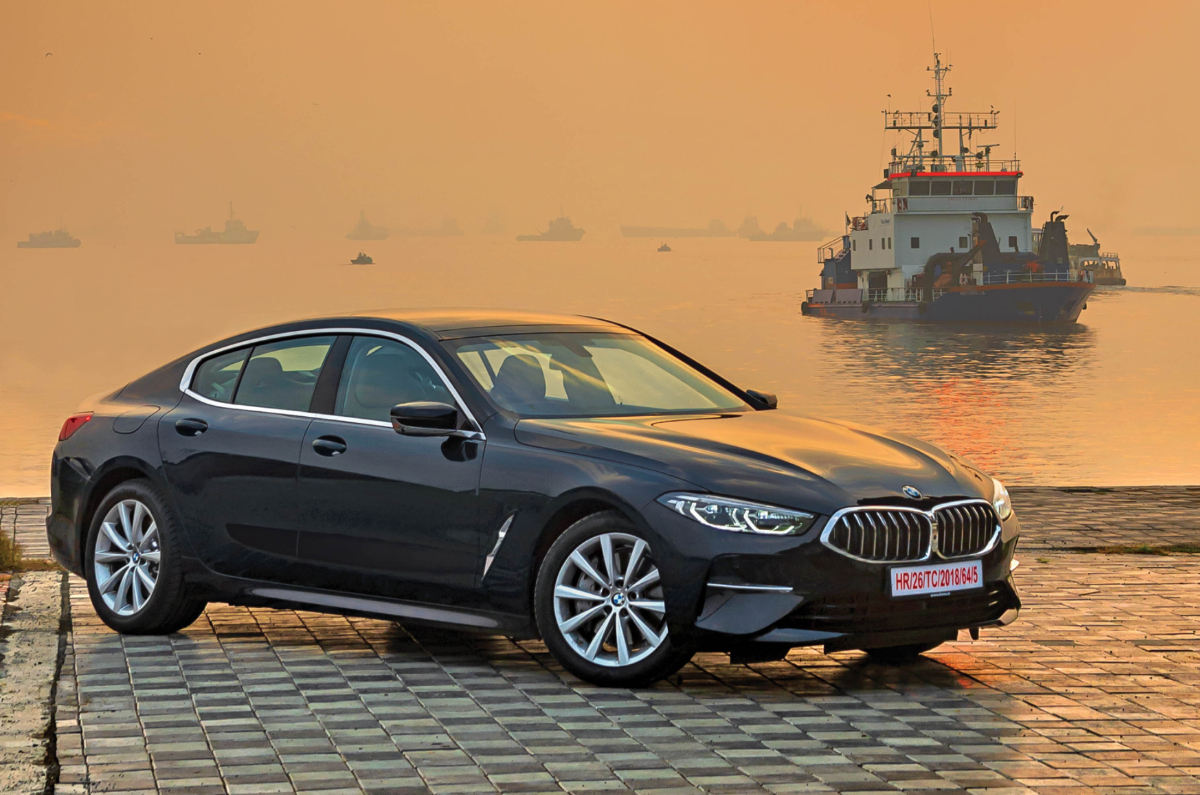 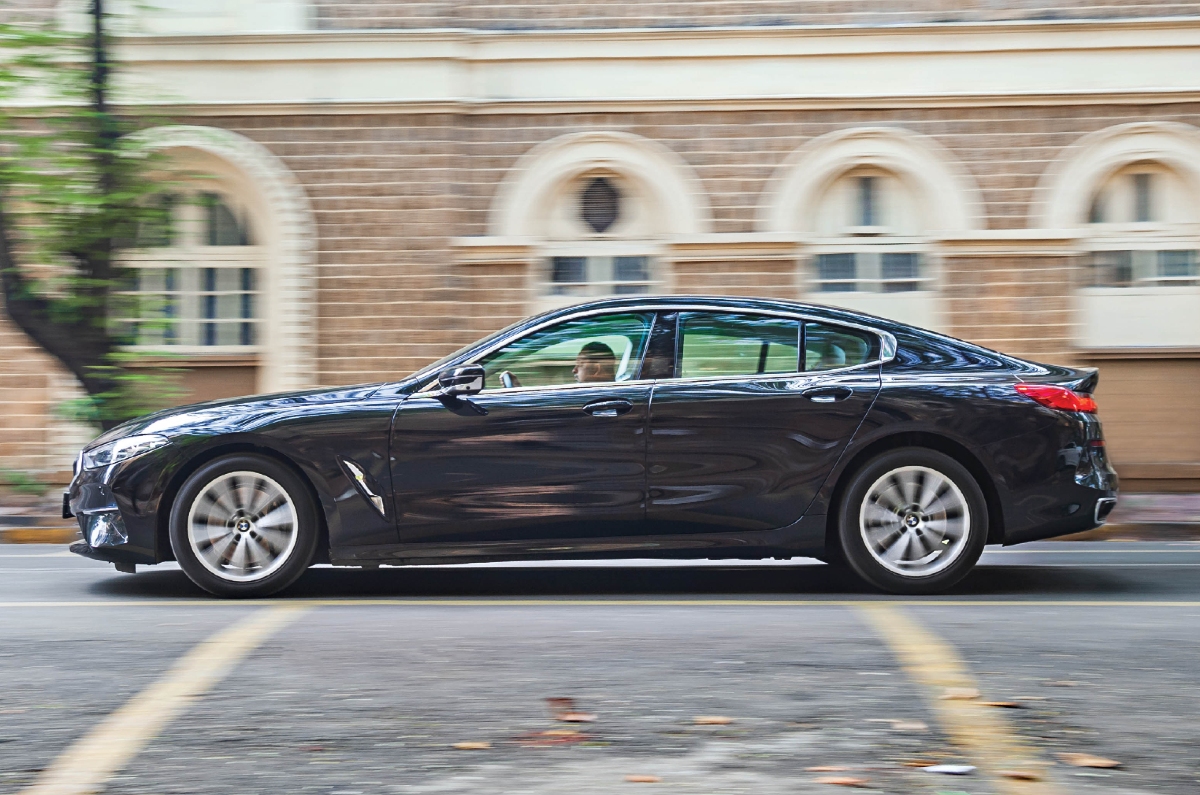 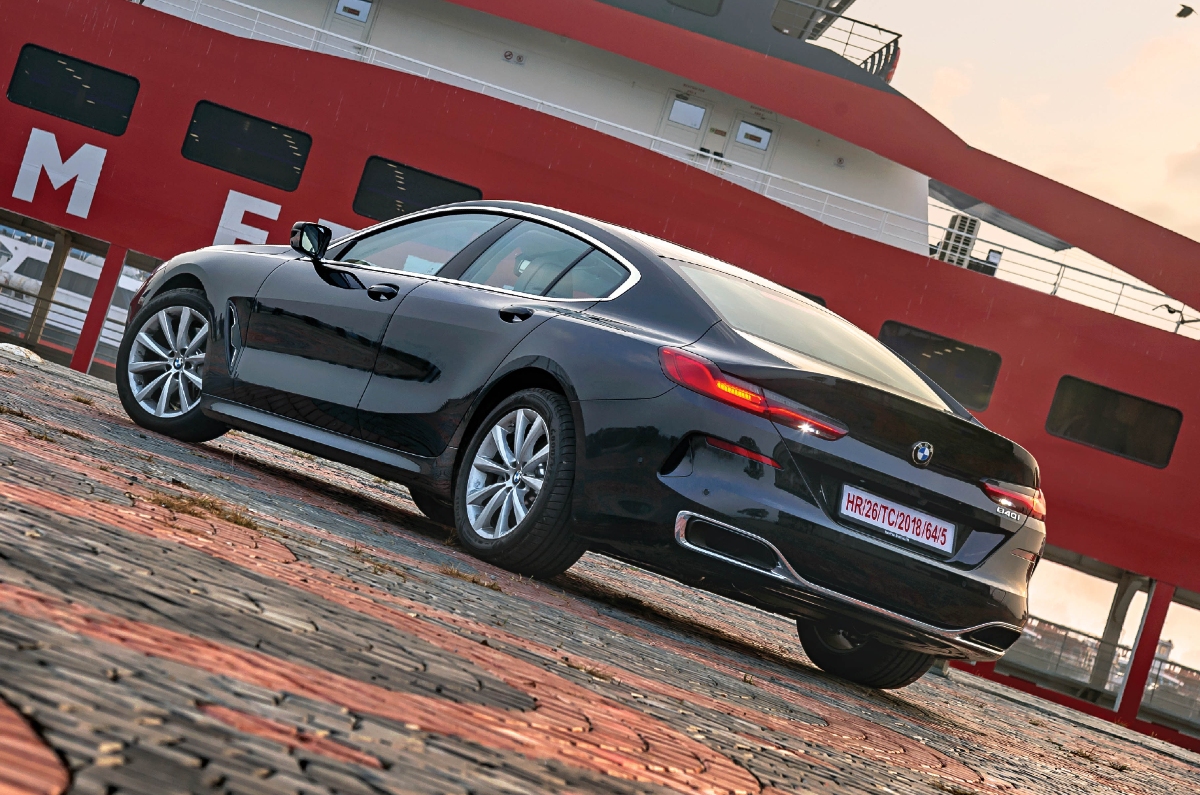 At 4:00am the roads around south Mumbai are perfect for a bit of a romp. There are long stretches along the sea-front where you can stretch your ‘legs’, elevated roads in the vicinity have interesting corners, and many of the business districts are deserted. Often, it’s just you and the owls. 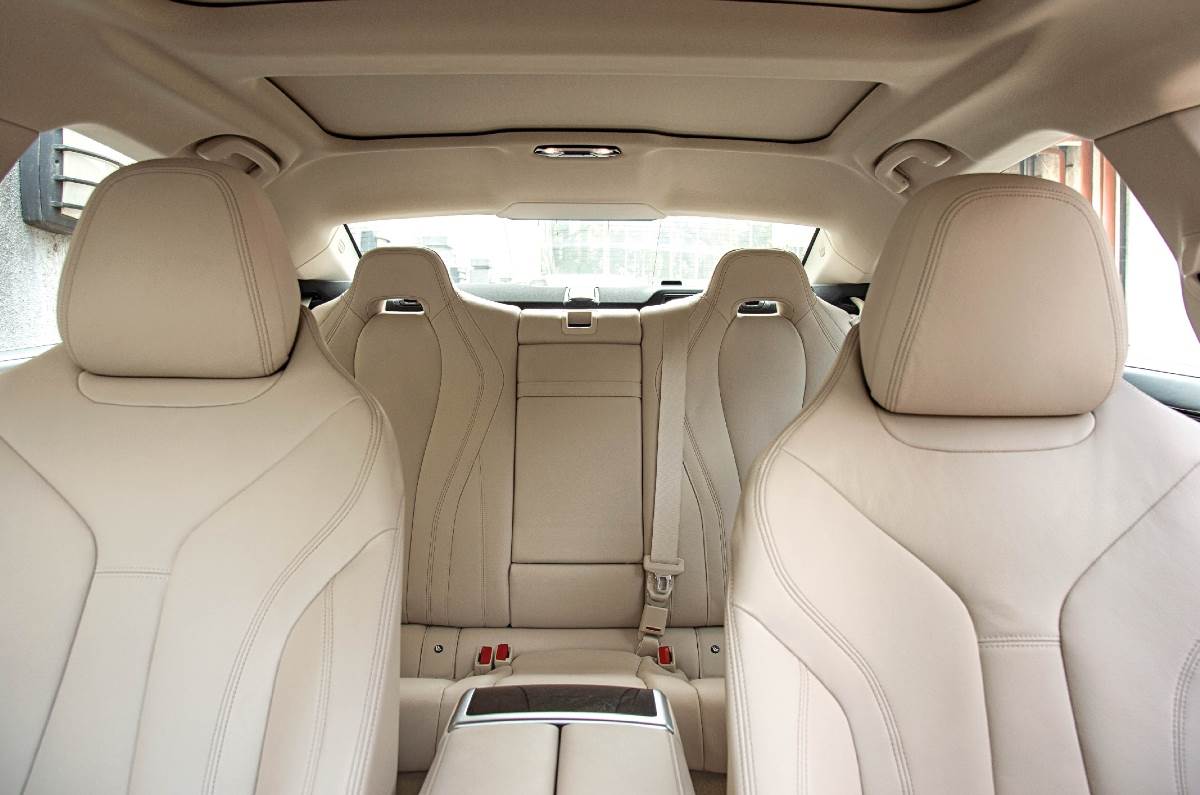 With four individual seats and a centre console that runs the length of the car, the low-roofed cabin has a cockpit-like feel to it.

There is, however, one tiny problem. BMW’s 840i Gran Coupe is just huge. More than five meters long, and seriously wide, the Gran Coupe is a veritable super tanker. So, initially, I take it easy. I get on and off the brakes smoothly – like I’m chauffeuring a head of state – I introduce the car to corners without turning in aggressively, and then even when I run the engine hard, I only use part of the power-band. 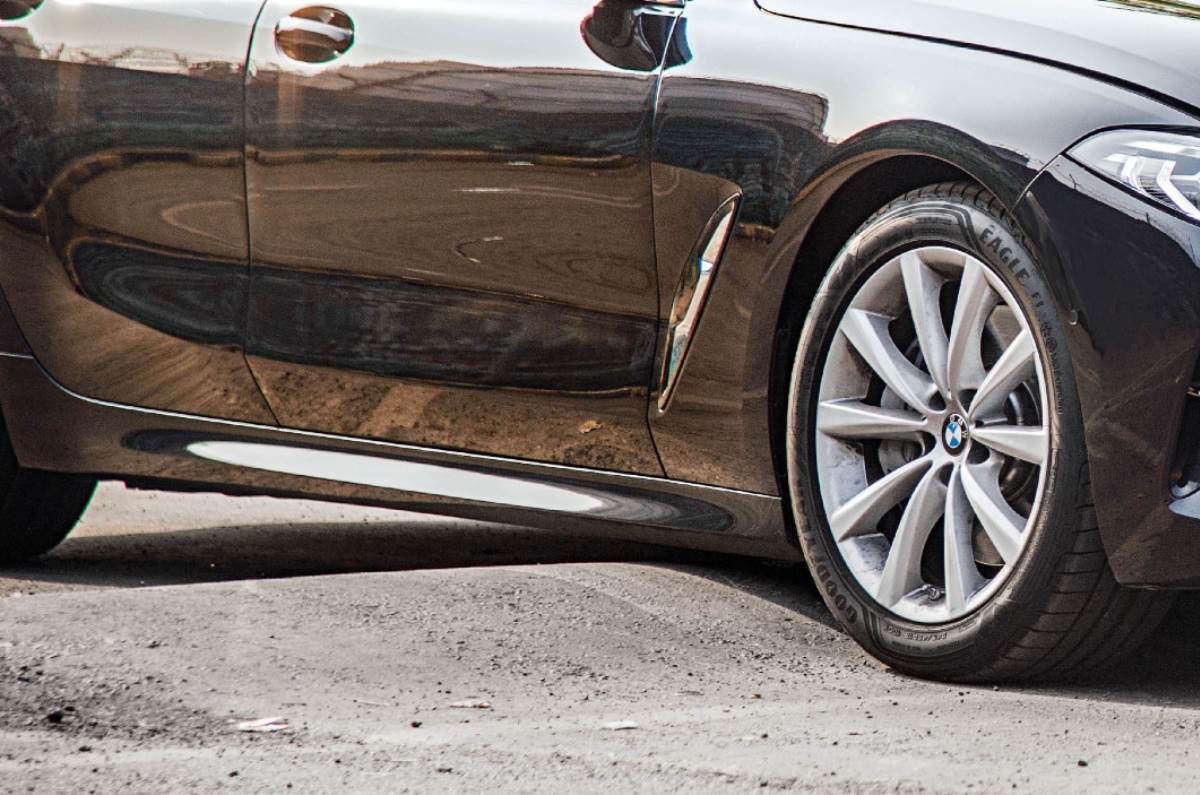 You may need to crawl over some of the larger speed humps.

Now, being out this early, I’m keen to see how well the BMW drives. The first thing I notice, however, is not the handling or the performance – it’s the ride. The relatively long wheelbase and the adaptive damping help the 840i Gran Coupe ride with a surprising amount of suppleness. Yes, there is a hint of a thump-thump over larger potholes, you have to be careful over larger speed humps, and on its short springs, the 840i does hop around when I run over some real bad patches. Still despite everything, the BMW is rounding off most bumps surprisingly well. This could have something to do with the fact that this 8 Series is running on 18-inch wheels or that the chassis is based on the 7 Series; the Carbon Core chassis and the super stiff central tunnel playing an important role. 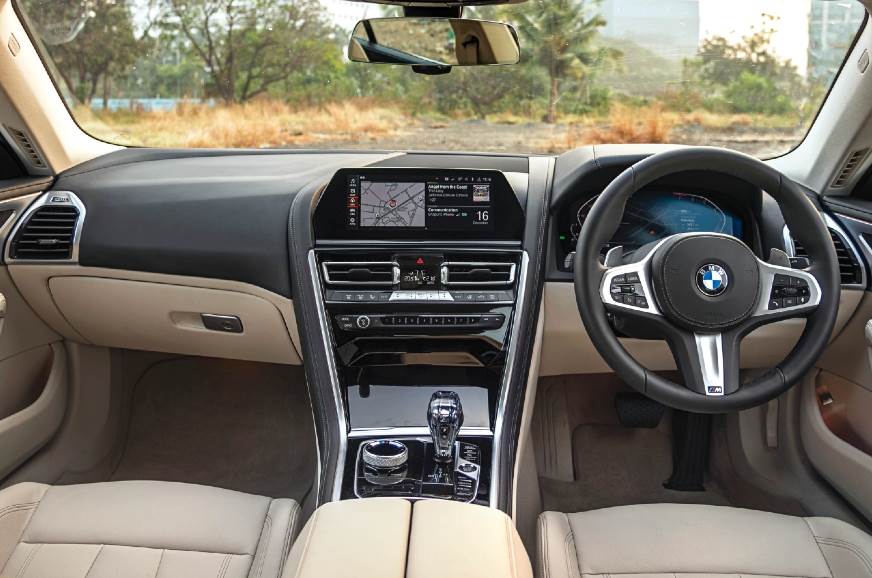 Fit, finish and especially quality levels are very high; cabin design is a bit generic though.

As I begin to pull the BMW harder and harder, it’s the 340hp turbo straight-six that impresses next. Yes, I miss the initial sledgehammer punch of a larger V8, and the eight-cylinder growl is also missing. Still, BMW’s sublime 3.0-litre engine is also massively charming. To begin with, it purrs at low speeds. Then, it smoothens up when I spin it faster and, when I flatten the throttle, the 500Nm of torque just helps it fly up to the redline with a huge surge of energy. It’s so enthusiastic at high engine speeds, it feels almost as free-revving as a naturally aspirated straight-six. Long pulls to the redline, with the city’s roads entirely empty at this early hour, feel particularly thrilling.

Adding to the feeling of flexibility and responsiveness is the 8-speed torque converter-based gearbox. Fast, smooth, and capable of lightning quick shifts, the gearbox works so well, I am almost always in the zingiest, meatiest part of the 840i’s powerband. 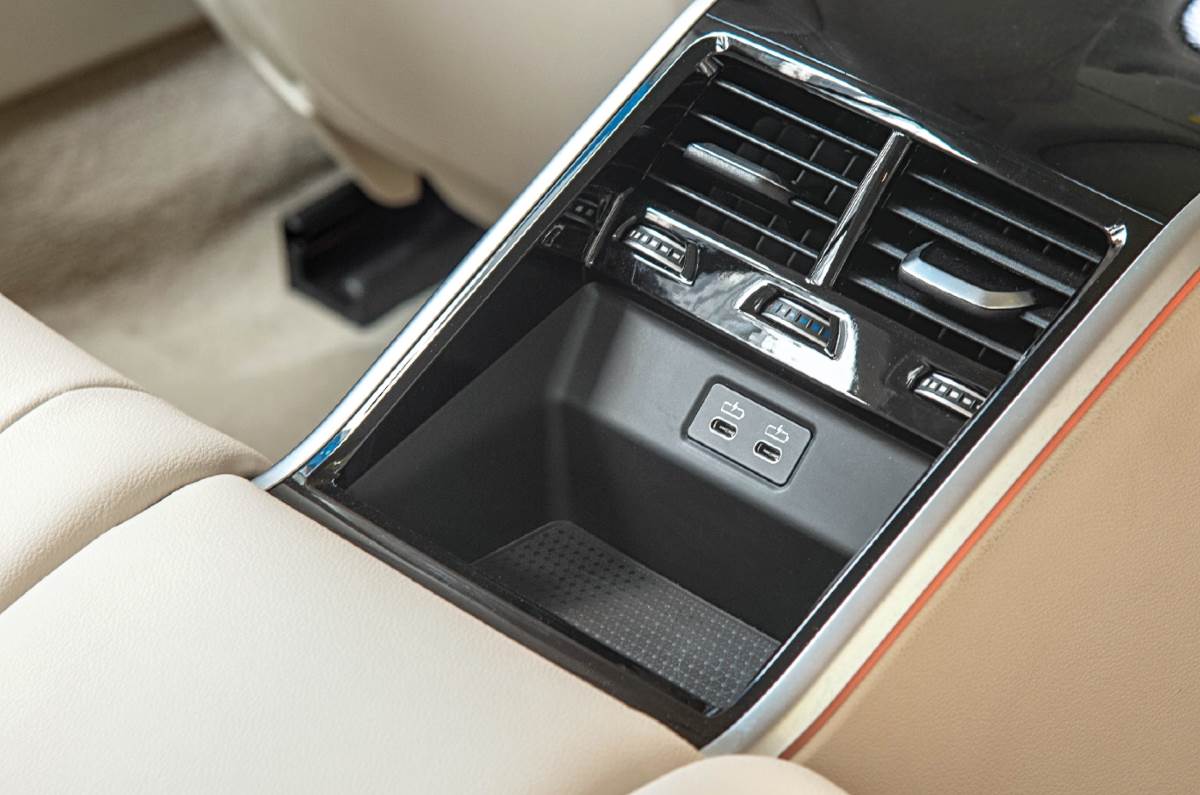 What really gets me grinning however, as I start to enjoy the corners on some of the elevated roads, is the sweet balance.  There’s a litheness and fluidity here missing on BMWs more heavy-footed four-wheel-drive cars. And then, what goads me on even more, is that the harder I drive it, the nicer and better balanced it feels. Overall agility, in fact, is so good, it appears to be no larger than a 3 Series from behind the wheel. That’s no tongue-in-cheek exaggeration. 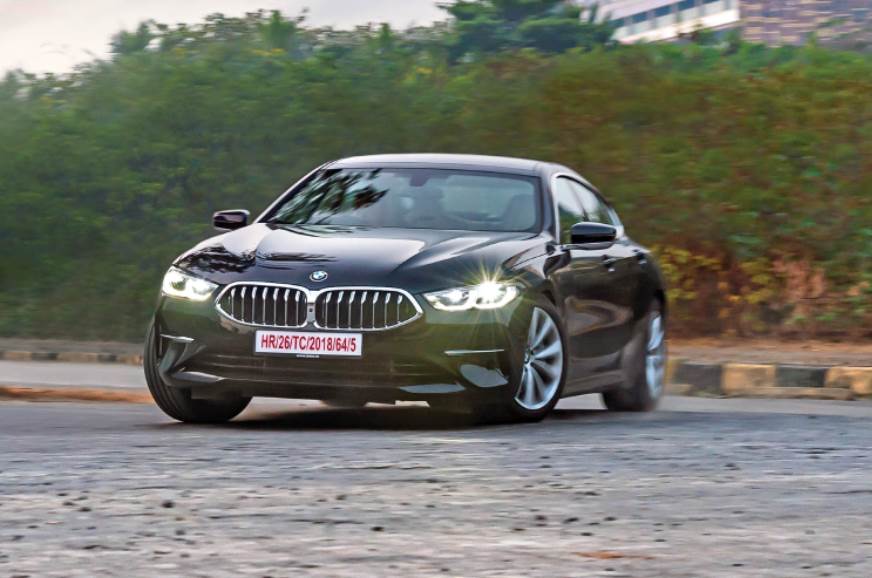 It darts into corners with the agility and balance of something half its size.

Absolutely the best bit, however, is the sweet rear-wheel-drive balance. With the weight of the car evenly split between the front and rear axle, and the 840i steering sending back realms of information to my palms, this is a special driving experience. This, despite BMW’s Integral Active Steering (rear-wheel steering) not being present on this car. No large four-door coupe, save for perhaps Porsche’s Panamera, drives as well.

Sport, Luxury and acres of leather

Like a multi-role fighter that can take on a diverse set of missions, BMW’s 840i Gran Coupe has multiple roles to fulfil. Question is, can you use it as everyday transportation? There’s plenty of space at the rear and the individual rear seats with their integrated head rests are very supportive. The rear seats, however, are more sporty than comfortable, and this is especially true on long journeys. You are seated a bit low, thigh support isn’t ideal and the seat is reclined to such an extent, you sometimes want to sit up a bit – which isn’t possible. 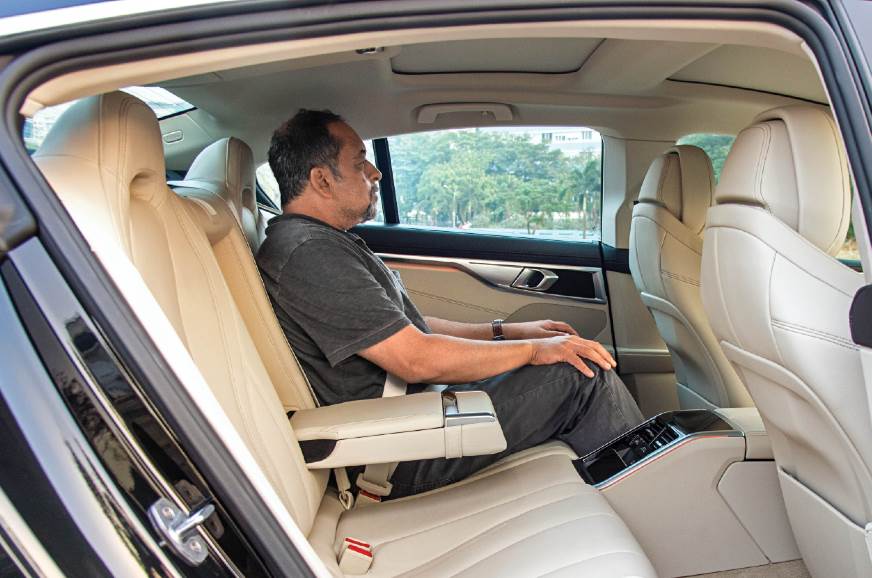 While space and legroom at the rear are good, passengers over six feet tall will find that the headroom is tight.

Passengers over six feet tall will also find that the headroom is marginal and then the wide centre console, which stretches all the way from the front to the rear, is a bit too wide and takes up too much space. Also, while sitting three abreast in the rear is technically possible (there’s even a third seat belt) the passenger will have to sit astride the rear centre console, which is weird.

What you can’t get away from, however, are all the high-quality bits on the dash. Step into the driver’s seat of the 840i and along with the low-set sportscar-like driving position, what you can’t escape are the acres and acres of high-quality leather, both, on the dash as well as on the seat. Then there are the chromed-over bits that dazzle and get your attention, and I even like BMW’s  ‘crystal’ bits on the gear lever, iDrive dial and volume control knob.  I must say I also like the cockpit-like feel of the cabin, with its severely rakedwindscreens, individual seats and long central console. The kit on offer includes wireless charging, gesture control for the iDrive, optional BMW laser lights and a heads-up display. 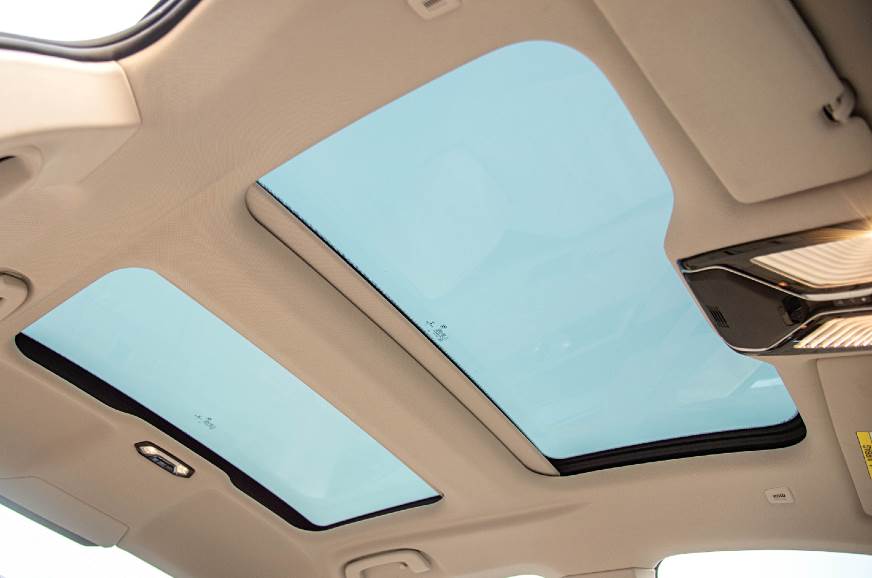 Like the rest of the cabin, the boot sacrifices some space to style; 440 litres isn’t great for a car of this length and you don’t get a spare – not even a space saver.

With its low-slung sportscar nose, long, ‘fast’-flowing roof and strong shoulders, the 8 Series Gran Coupe is a luxury grand tourer or four-door GT that grabs your attention. The long, flat bonnet and tight-fitting roof lend a lot of elegance, and what helps give it balance is that this pillarless four-door coupe has an absolutely massive, three-meter-long wheelbase. 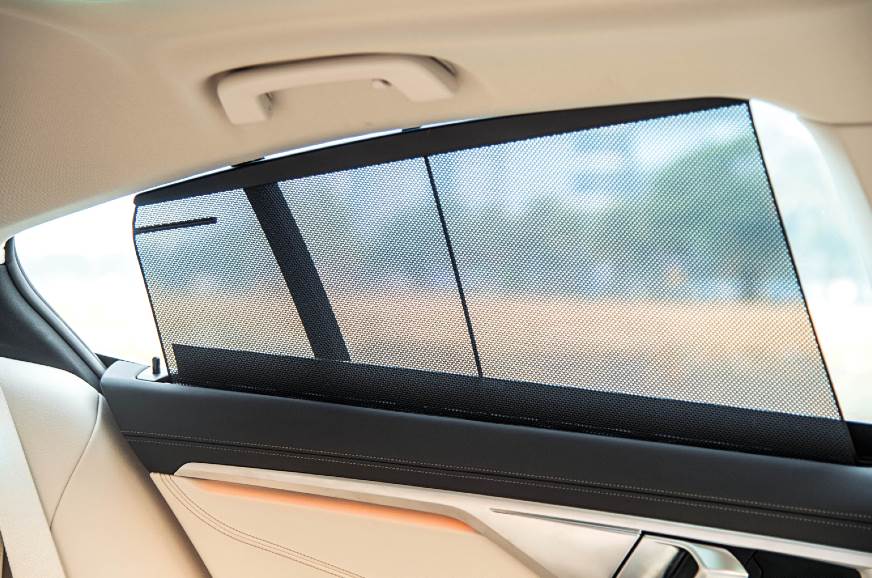 Style-wise, it is a happy blend of elegance and sportiness. China isn’t the number one market for the 8 Series, so it doesn’t come with a super-sized grille. Rather, the grille is wide, and the hexagonal LED accents in the headlights hit the spot. The rear however is probably the most attractive bit of the 840i. The integrated ‘Ducktail’ spoiler sets the theme here, and what makes it look even more more squat is that the 840i sits on a wide base, which of course helps give it a bottom-heavy look.

It’s not easy being a four door coupe. The list of must-haves is long, and many of these requirements are at odds with each other. BMW’s 840i however manages to tick many of the boxes. First and foremost it’s an absolute peach to drive. The straight-six has an explosive kick in the top end, the gearbox is quick and intuitive to use, and the best bit is that its innate rear wheel drive balance is so good, it drives with the agility and sweetness of a car half its size. It also rides well, is attractive looking, with a superbly appointed cabin, and comfort levels up front are so good, it sort of makes you forget it’s a GT. It is a bit expensive, however, at Rs 1.32 Crore. The rear seat isn’t good enough to use day in and day out and, at this price, a larger capacity V8 under the hood would have made for a good addition. Still, if you want the combination of a sporty GT and a practicality of a four-door, few cars come closer to delivering the ideal compromise. It certainly is right up there for sheer ability and agility, with the more expensive Porsche Panamera (Rs 1.48 Crore), its most natural competitor. 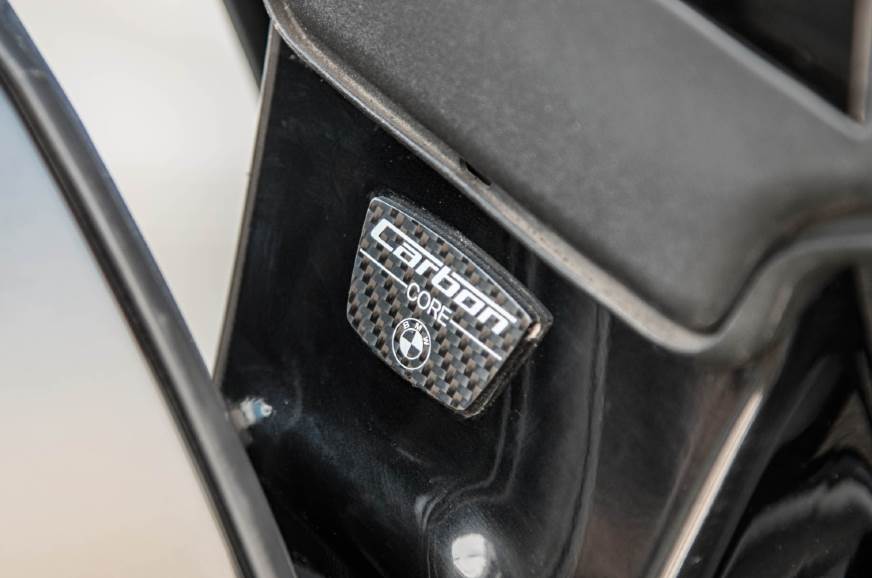 Tired of running a mud-plugger on the road, an environment it isn’t specifically designed for? The 840i Gran Coupe could just be the luxury car for you.