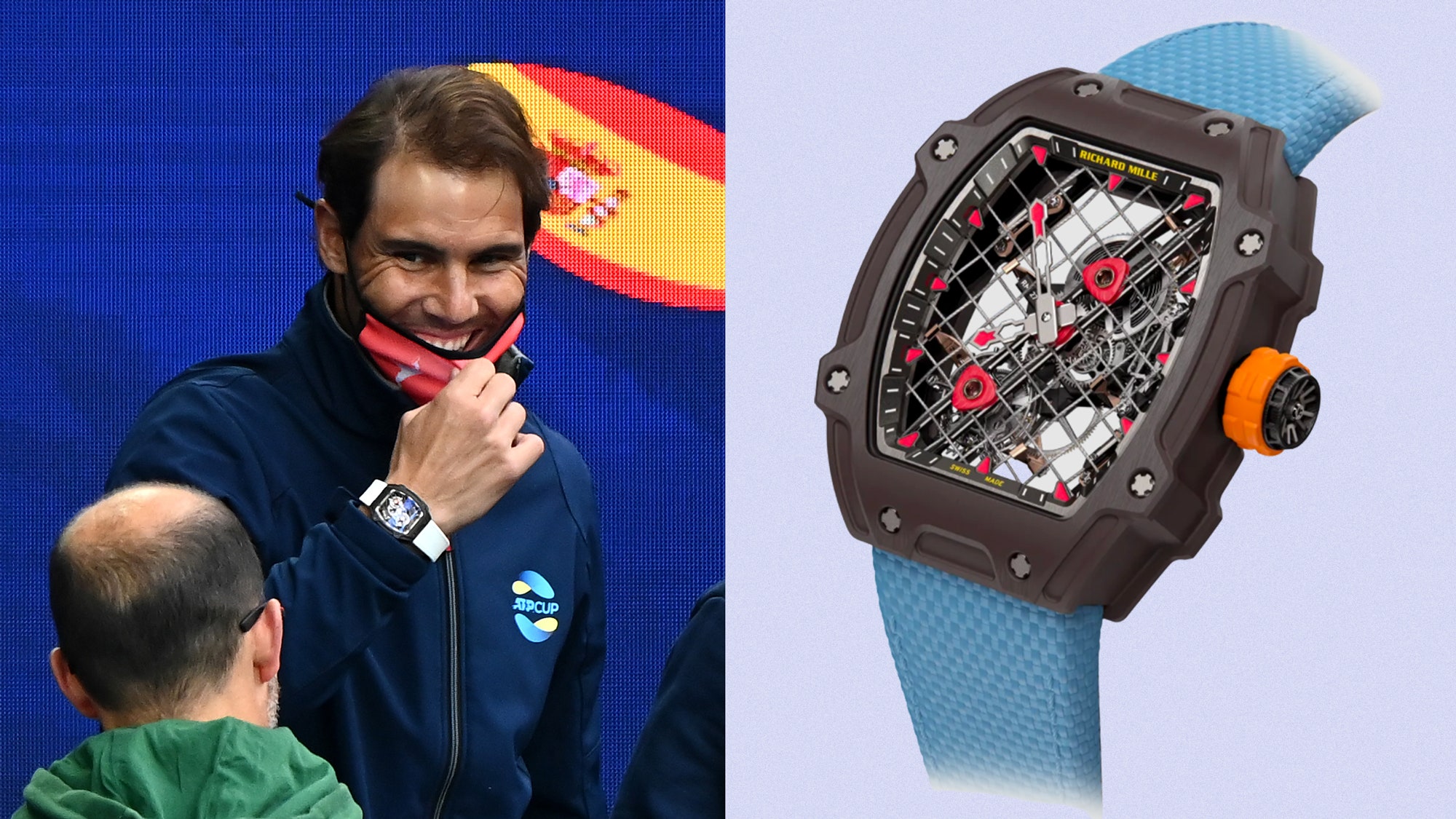 While Rafael Nadal’s new collaborative Richard Mille watch may be a few months old at this point, I thought the one he wore this week was something else— a completely new, special edition of the model, maybe. I was so convinced I emailed the folks over at RM who confirmed: nope! Same watch. Just a new strap. Which is a bigger deal than it sounds like! While some watch connoisseurs compare the strap to a car’s tires—functional and replaceable—Nadal makes the case that the strap is more like a fresh new paint job.

And while Rafa’s standard lagoon-blue strap played nicely with the watch’s orange and red accents, his new white strap dials up the contrast, makes the case appear darker in context, and turns a once funky-and-colorful piece into something practically monochromatic.

With Strap Talk out of the way, we can get down to appreciating this particular piece. Richard Mille took a steel cable and strung it back-and-forth across the watch’s dial until it mimicked the design of a tennis racquet. The design’s inspiration might be rather obvious, but RM found a way to make it functional, by using the cables as a stabilizing force for the watch’s movement. That’s the sort of ingenuity that makes this—literally—a million-dollar watch.

The Bridgerton star broke out this year, and he’s found a great first leveled-up watch. While Cartier didn’t start making wristwatches until long after the Regency period (1811 to 1820) during which Bridgerton is set, the jeweler eventually became the signifier of nobility. And Cartier absolutely would have been the choice for someone of his character’s noble and high-ranking status. King Edward VII, who was born in what we’d call the post-Bridgerton period, once called Cartier “the jeweler of kings and the king of jewelers.”

The watch is quite a glow up for Page, too. Just last week, he was photographed wearing a Fossil watch at a BAFTA event.

The rhythm is nearly routine now: an NBA player ascends to elite status and—boom!—like magic, a Royal Oak appears on his wrist. We’ve seen this time and time again: it’s happened to Anthony Davis, Luka Dončić, and there’s good reason it’s LeBron James’s favorite watch, too. This time it’s Jayson Tatum whose wrist has gone from naked to equipped with a Royal Oak over the past few weeks. Tatum’s comes with a chronograph, presumably so he can time his breakneck pace to NBA superstardom.

Tony Parker may be retired but basketball is still always on his mind, or at least on his wrist. Parker is wearing a special-edition XL NBA watch from Tissot—the official watch brand of the NBA. The Jerry West logo is engraved on the case back, and the strap is made from basketball leather. This is the kind of watch that pairs well with four NBA Finals rings.

Here’s that Royal Oak again! Kyle Lowry has the heart of a champion, and also the watch of one. The secret sauce for Audemars Piguet is that it keeps its mystique while also being, seemingly, the official purveyor for the NBA’s top 1%. Last year, Draymond Green told me he loves Audemars because “there’s not many of them…[If] you walk into a room and see one other person with [an AP], it’s a conversation starter because you know and you understand what that guy had to go through to get that watch.” While it might not appear that way because of how frequently the watch pops up in this column, it’s good to remember that the Royal Oak only appears on the Greens, the Lowrys, and the Tatums—the very best watch for the very best of the NBA.