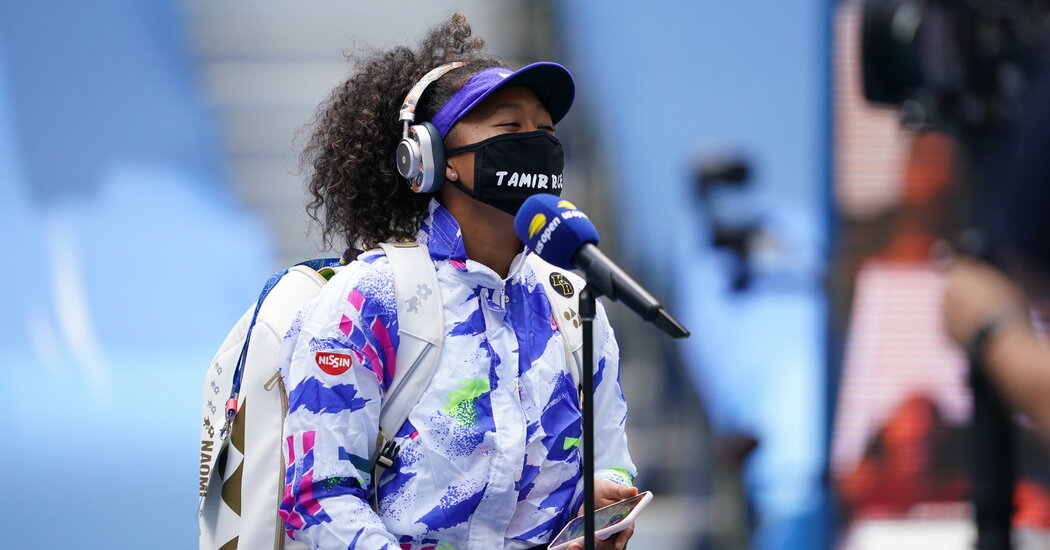 Are you a sports fan? Do you follow tennis? What was your reaction to Naomi Osaka’s U.S. Open title win in September and her use of masks to honor Black victims of violence?

The New York Times reported at the time:

Osaka, still just 22, is undoubtedly a great player already, and there was much for her to savor on many levels over the last three weeks. Much to ponder, as well, as she took on not only some of the toughest tennis players in the world but some of the thorniest social issues, as well.

She handled the pressure on both fronts and returned to the fore in women’s tennis with Saturday’s gritty 1-6, 6-3, 6-3 victory. She wore seven masks with different names for each of her matches to honor Black victims of violence. She said it motivated her — “I wanted more people to say more names” — and she walked on court Saturday with a mask bearing the name of Tamir Rice, a 12-year-old boy shot and killed in Cleveland by a white police officer in 2014.

“The point is to make people start talking,” Osaka said at the award ceremony.

If you watched the Open, what did you think of Osaka’s public display of activism? Did it make you more of a fan? Or did you feel it took away from your and other fans’ enjoyment of the game? Do you think the masks Osaka wore were an effective way to get people to start talking? (If you want to learn more about this moment, you can watch this short video profile on Osaka for Sports Illustrated’s 2020 Sportsperson of the Year.)

In “Athletes, Speak Up,” an essay for the Opinion section, Osaka writes about what inspired her:

“Shut up and dribble.”

That’s what a news anchor suggested LeBron James do after he discussed racism, politics and the difficulties of being a Black public figure in America during an ESPN interview in 2018.

LeBron, the activist, first caught my eye in 2012. He and his Miami Heat teammates posted photos of themselves in hoodies to protest the murder of Trayvon Martin, an unarmed Black teenager in Florida who was wearing a hoodie when he was fatally shot by George Zimmerman, a neighborhood watch volunteer. In 2014, Eric Garner, a Black man, died in Staten Island after police officers held him in a chokehold, a move banned by the police at the time and one that has since become illegal in New York State. Soon after, LeBron wore a T-shirt with the words “I can’t breathe” — Garner’s last words, which were captured on video as the officers strangled him — during a pregame warm-up. The rest of the league followed, but James was the focal point.

Fast forward to this year and he is still in the cultural spotlight. LeBron has the loudest voice and the biggest platform, and he used them to protest systemic racism, inequality and police brutality, all while his game continued to flourish in the face of unprecedented protests, a world-changing pandemic and deeply personal hurts, including the tragic death of our mutual friend Kobe Bryant.

LeBron is ferociously brave in his steadfast support of the Black community. He is unwavering, upfront and passionate. On the court or at the mic, he is simply unstoppable and an inspiration. He is dedicated to his craft, but equally dedicated to his community, even as he continues to fight against an established history of silencing athletes who speak out.

Musicians sing and write about social movements, activism and equality all the time. Actors voice their opinions and often personally endorse political candidates, hosting fund-raisers and throwing parties. Business executives, authors and artists are almost expected both to have opinions about the latest news and to publicly defend their views. Yet when it comes to athletes, we are often met with criticism for expressing our opinions.

Do people see us as no more than bodies — individuals who can achieve what’s physically impossible for nearly everyone else, and who entertain fans by pushing ourselves past our limits? Do they wonder if a collection of muscles, bones, blood and sweat might also be able to voice an opinion? Should sports just be sports, and politics just be politics?

Today, given the television coverage we receive and our prominence on social media, athletes have platforms that are larger and more visible than ever before. The way I see it, that also means that we have a greater responsibility to speak up. I will not shut up and dribble.

The Three Big Transitions Of Onboarding An Employee