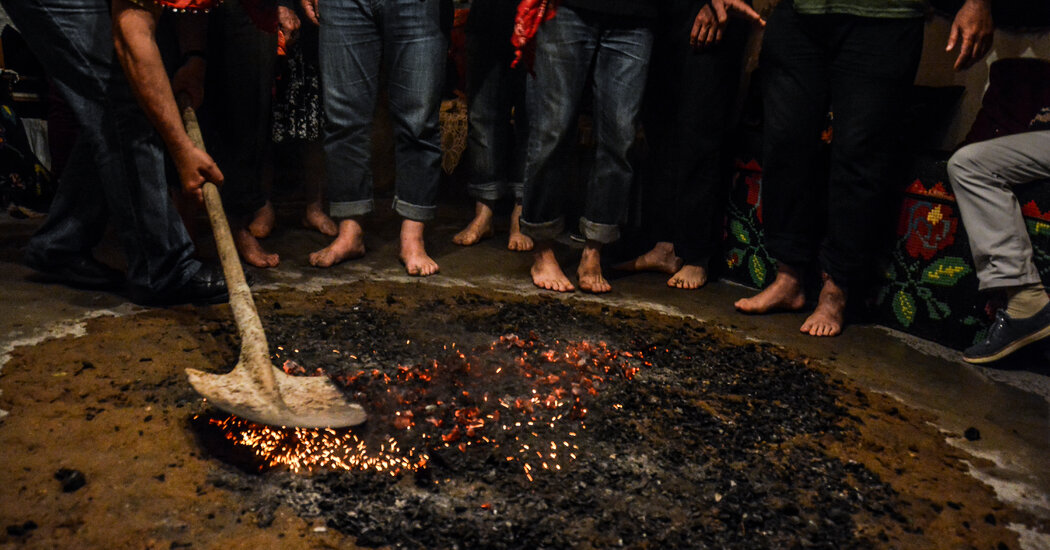 The room was dimly lit, illuminated only by a weak yellow light bulb and the flames from the fireplace. A small group of men and women, clutching the holy icons of Greek Orthodox saints, was dancing and twirling around the floor under the sound of the instruments: a Thracian lyre, a gaida, a tambourine. The dancers, surrendering to the music, had their eyes closed.

Constantine the little one, little Constantine,
His mother had him, she took care of him while he was very young,
A message came for him to go to war,
He saddles and horseshoes his horse in the night,
He puts silver petals, golden nails and a pearl on the saddle.

Their voices carried outside into the rainy streets. A while later, in a kind of an ecstasy, they began walking barefoot on burning coals.

Each year on May 21, the Greek Orthodox Church celebrates Saint Constantine and Saint Helen. In the small village of Lagadas, about half an hour outside Thessaloniki in northern Greece, the celebrations last for three days and include a spectacular fire-walking ritual called Anastenaria, the word for which derives from the Greek “anastasi,” meaning resurrection.

In 2016 I traveled to northern Greece to meet some of the people who maintain these traditions.

The family and close friends of Anastasios Gaintatzis are some of the last remaining participants. Mr. Gaintatzis, who is 85, is one of the oldest fire walkers in the country. His family, who once lived in what is today the Bulgarian town of Kosti, in eastern Thrace, arrived in Lagadas in 1923, after the compulsory population exchange between Greece and Turkey.

The people gathered here were members of a club formed by the Gaintatzis family in 1994 to help perpetuate the local fire-walking traditions.

Ethnographers believe that the ritual has its roots in the ancient Greek celebrations of Dionysus — and that, through the years, the pagan traditions have melded with Orthodox rites.

Others believe in a local legend that attributes the origins of the ceremony to when the church of Constantine and Helen caught fire in Kosti, many hundreds of years ago. According to lore, the voices of the saints were heard pleading for help inside the church. Villagers entered the flaming building to rescue the saints’ icons, and, when they came out, neither the rescuers nor the icons were harmed. They’d been protected from the fire by the saints.

The Anastenaria ritual starts at the konaki, a special shrine dedicated to the saints, where the icons are placed among the amanetia (red handkerchiefs that are considered sacred by the fire walkers) and other tributes.

Then the musicians arrive and the celebration begins.

The fire-walking ceremony is usually performed outside, but in 2016 a heavy rainfall forced the event indoors.

One of the group members placed large pieces of wood on the fireplace and, by the time hot coals had formed, everybody was ready to begin. The celebrants removed the carpet, scattered the burning coal on the ground and, one by one, started walking on it, barefoot, with closed eyes, almost drunk with the emotions of the moment.

Some participants walked slowly, others more quickly. They followed the rhythm of the music. I tried to pay close attention to their faces. They showed no signs of pain or inconvenience. In fact they seemed rather calm and peaceful.

When the first batch of coal had cooled, a second batch was brought out from the fireplace, and the ceremony continued unabated.

Even as a spectator, I felt a swell of emotion while watching the fire walkers — and perhaps even the deep mystery and divinity of the moment.

The Anastenaria rituals in Lagadas usually attract dozens of people from the surrounding area, but on the first day the poor weather kept most visitors away. The following two days, however, after the rain stopped, many people came to watch — and this time the fire-walking pit was set up in an outdoor area near the konaki, provided to the celebrants by the municipality.

Metal barriers were arranged in a large circle to keep the audience safe, and in the center members of the group lit a huge fire on a pile of wood. As night fell, people gathered around to watch. When the fire walkers and the musicians left the konaki, it was already pitch black outside. All the lights in the area went off, and the only thing you could see was the burning coal. The crowd stared in silence as the fire walkers rushed onto the embers.

After the celebration, the members of the group gathered back at the konaki and ate hot bowls of soup to help ward off the cold weather. They offered a bowl to me, too. Soon everyone had departed except for Anastasios Gaintatzis.

Mr. Gaintatzis has long tried to keep the custom alive by bringing new family members and close friends into the fold whenever possible. But it’s not an easy task, he said.

“It’s something that can’t be taught,” he told me. “It’s the saints who call you.”