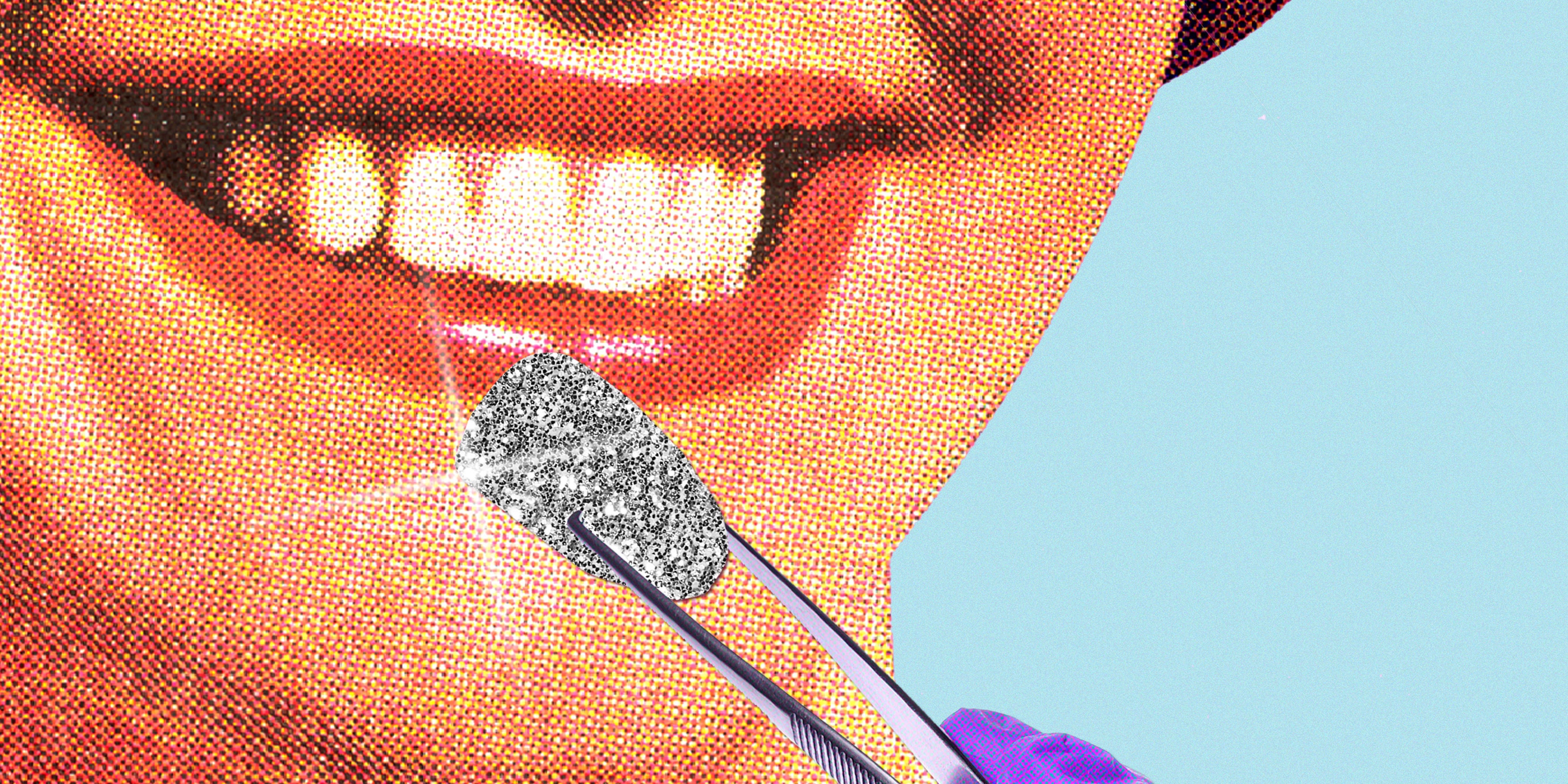 So, anyway, for whatever reason, Mrs. Dalloway says she wants to get veneers. A veneer is a small tooth facade, made of either porcelain or a resin composite. The latter is cheaper, but less durable and more prone to staining. Most cosmetic dentists begin at the end, by building a model of a patient’s soon-to-be new smile. A series of consultations with Mrs. Dalloway’s cosmetic dentist may actualize into a small, composite sculpture of what her teeth would look like if they were perfect or, using computer-aided design and computer-aided manufacturing (CAD/CAM) technology, the smile can be designed on a screen, carved from a single block of porcelain or composite, and returned in the form of individual installation-ready teeth. For those looking to replace or fix lost architecture, strategically placed veneers make it possible to cram years of orthodontia into a single, painless afternoon. They also come with a secret bonus that is capable of turning a luxurious procedure into a priceless one: They render the human face virtually customizable — at least the mandible to cheekbone area, which offers infinite, gorgeous possibilities. Adding volume to front teeth, for example, can slightly push the mouth open, creating an entirely new lip shape.

The size of the global cosmetic dentistry market by 2024: $28 billion.

Practitioners like Michael Apa, a cosmetic dentist on Manhattan’s Upper East Side, fancy themselves artists more than clinicians, decrying the advent of digital technology in the same way Yves Saint Laurent might be tortured in the afterlife by the possibility of 3D-printed dresses. For a more God-given finish, Apa builds a smile by layering porcelain on the teeth of some of his patients (who include Chloë Sevigny, Huda Kattan, and a couple of elder Olsens, though we cannot confirm that all of them are veneers patients).

Such practitioners may also genuflect before a global council of elite cosmetic dentists known as the Oral Design International Foundation, headquartered in Zurich. It’s basically the United Nations of veneers. In 2013, over 30 years into its existence, the council’s founder and unofficial chancellor issued an editorial against the “demonization” of digital technology and acknowledged a schism between those who value craftsmanship versus efficiency in the tooth-making community. But the rest of the letter thrums with anxiety about what the digital future will do to the highest levels of dental craftsmanship (and, you could extrapolate, to the careers of elite tooth artisans).

In one of my first interviews with Apa several years ago, he likened his construction of a smile to the construction of a Ferrari. More recently, he likens it to the construction of a Bugatti, an even more bewilderingly expensive machine. Less than 500 Bugattis exist today. The cars look and perform superlatively, but that isn’t really the point. The average Bugatti shopper already owns a small fleet of transportation options, including, give or take, 42 cars, three helicopters, and three private jets.

The Injectable Psoriasis Treatment You Probably Didn’t Know About

10 Best Ways to Lose Weight as a Couple