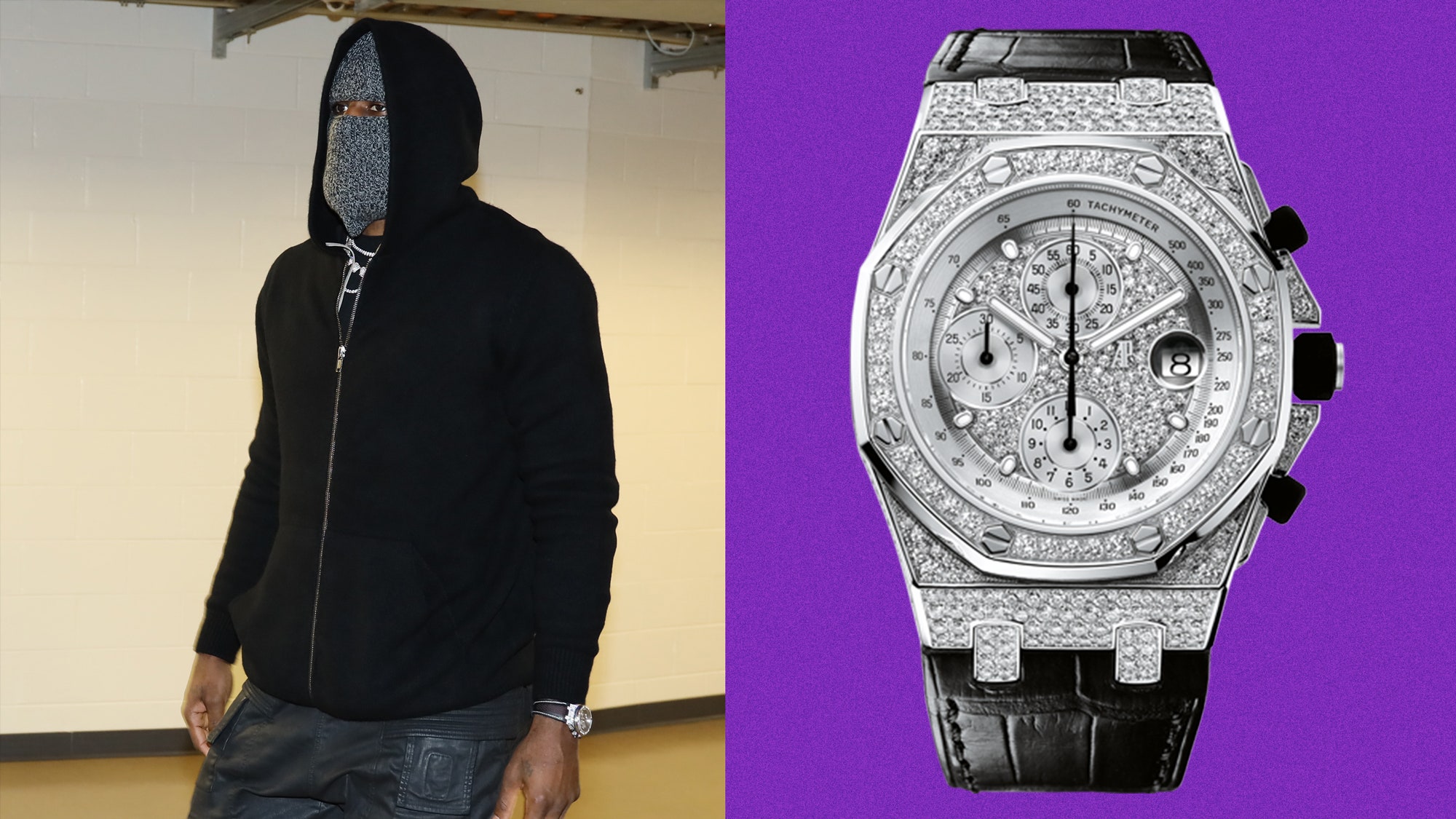 Watching LeBron James this season, I’ve been struck by a new, easeful quality to his greatness. He’s long been far and away the greatest basketball player alive. Now, though he’s not posting as many of his aggro workout videos to Instagram—in their stead are snapshots of a man embracing his throne. Every Sunday there’s football on a massive wall of televisions; every night there seems to be a new $3,000 bottle of wine uncorked. He’s invested in a tequila company, and will star in a major motion picture this summer. On the court, he’s basically sleepwalking into 25 points, 7 rebounds, and 7 assists a night. Plus, it looks like the King got a couple more jewels: this time in the form of an Audemars Piguet Royal Oak Offshore Chronograph. The watch also puts up Bron-like numbers: the case, links, and bezel are set with 341 diamonds and there are 104 more on the dial—that’s a total of just over 6.5 carats worth of diamonds. Also this week, Joe Biden’s watch rotation deepens and Damian Lillard shows us how he clocks Dame Time.

James is also the King of the Royal Oak Offshore—he owns a small treasure chest’s worth of this specific model. He’s been spotted wearing one with an openworked dial and a tourbillon in gold, and appears to own the very same model in stainless steel. Other collectors in the NBA come to James for a specific model of the Royal Oak Offshore. “I want that piece so bad,” Draymond Green told me last October. “And it’s impossible [to find]. And [James] just would not give it to me. The reality is, I mean, I’d buy it from him. I offered him money to buy the watch, but Lebron James doesn’t need money.” Green had good reason to ask James: the Lakers superstar doesn’t just collect the model, but he’s designed one with his name on it, too. This latest diamond-set edition is just another piece in James’s growing collection.

While last week the focus was on the new president’s Datejust, this week Biden went with a more Everyman wrist accessory: the Apple Watch. Biden is the first US president to wear an Apple Watch, which is slightly surprising. But a president sending a message with his wristwear is nothing new. The Vulcain Cricket, which was worn by Lyndon B. Johnson, Harry Truman, and Dwight Eisenhower, was one of the first watches with a working alarm function—it told voters you were a man who was always on time. The Apple Watch says something similar: that a phalanx of advisors isn’t enough: the split second one might save checking an email with a tilt of the wrist is the difference between a thriving nation and a struggling one. “I think most political dress consultants would say wear something either super-cheap, like a Timex Iron Man, or an Apple Watch to indicate you’re on top of things,” Eric Wind, the owner of Wind Vintage and passionate chronicler of presidential watches, told me in November of last year. Looks like Joe thought the same thing.

Anyone who’s tuned into a Portland Trailblazers game knows what happens when Lillard gets cooking. Lillard, along with his teammates watching in awe from the bench, start tapping their pointer fingers against their wrists. Why? Because it’s Dame Time, that magical end-of-game stretch when Lillard tends to take over. It’s a shame that this man doesn’t have some sort of watch deal, but in the meantime the official timekeeper of Dame Time is the gold Rolex Day-Date.

There’s actually a totally reasonable explanation for why this watch’s movement looks like it’s floating in the middle of the case’s frame. This Richard Mille is designed for Bubba Watson, the golfer whose playing style Golf Digest describes as “half art, half violent explosion.” Most golfers don’t wear watches while they’re golfing because the reverberations caused from connecting driver to ball can dislodge parts in a piece’s movement. That rule should be doubly true for someone playing “Bubba Golf.” So Richard Mille designed a watch with four shock absorbers around the movement. I assume this is the sort of safety measure required for a night partying with Roddy Richh.

Old advertisements for the Day-Date focused less on the actual watch than the type of person who wore one. “If you were speaking here tomorrow,” one reads alongside an image of the United Nations building, “you’d wear a Rolex.” Another goes, “A Rolex will never change the world. We leave that to the people who wear them.” The watch is associated with the best of the best. Which makes it a fitting choice for someone like Bam, who has rocketed himself into the NBA elite this season.