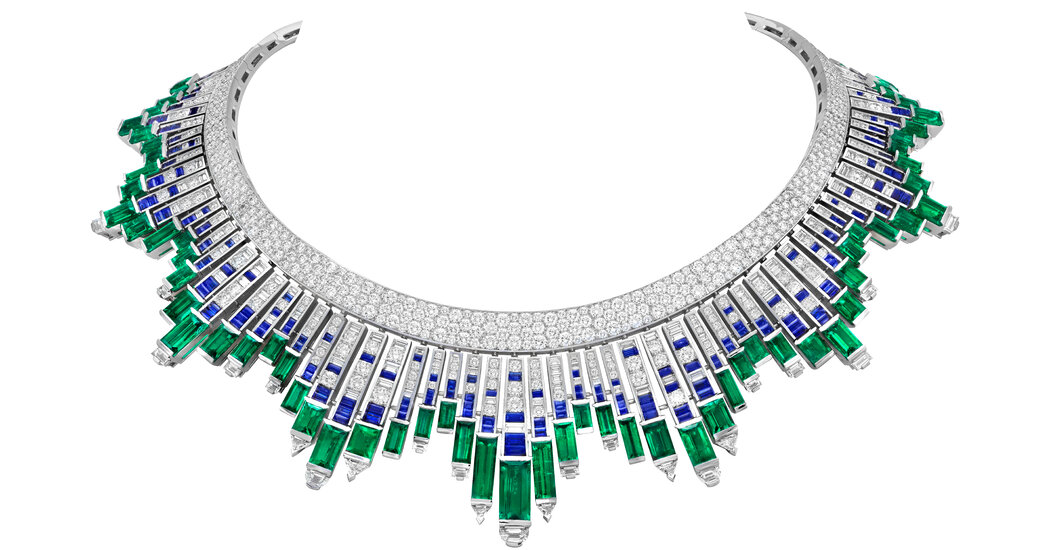 Although almost no traditional couture shows were scheduled this week, a handful of houses on Place Vendôme — Chanel, Van Cleef & Arpels, and Boucheron among them — planned viewings of high jewelry collections by appointment, and in keeping with local health guidelines.

But others, such as De Beers and Cartier, have mostly transitioned to the virtual realm. And a few, including Louis Vuitton, Dior, Repossi and Chaumet, have moved their collection debuts to March, following the fall 2021 ready-to-wear shows here.

It seems that many houses are leaving their connections to Couture Week behind and moving to their own calendars, much like fashion’s adaptation to months of lockdowns and distancing.

Will it continue in a post-pandemic world? Only time will tell.

One thing that has remained constant, however, is the lure of Art Deco, even 100 years on.

Inspired by their own archives from an era that was both opulent and radically simple, many jewelry houses have left rainbow hues behind to return to the graphic allure of black and white, chiseled lines, and stylized curves, with a shot of bold color. Emeralds, in particular, took pride of place this season, but so did yellow diamonds and ornamentals like lapis lazuli paired with white diamonds and colored gems in a mash-up of cuts. A mix of metals enhanced the effects.

The interplay between past and present was perhaps most apparent in the Sous Les Étoiles collection by Van Cleef & Arpels. (The house said the 80 jewels to be shown this week were about half of the planned total.)

Stargazing, drawn from mythology, science fiction and even NASA, came together in gem-studded pins of goddesses symbolizing planets and constellations, like Cassiopeia, and pieces whose colors and forms were linked to popular science, including illustrations from the late-19th-century book “Astronomie Populaire” and recent images from deep space of nebulae, cepheids and comets.

For example, the 41P, a blue-green comet that occasionally may be seen with the naked eye, was reinterpreted as Nuée d’Émeraudes, an articulated plastron necklace made of 96 baguette-cut Afghan emeralds weighing a total of 62.3 carats as well as sapphires and diamonds, all mounted in a radiant shape and reflecting the house’s extensive Art Deco heritage.

In a more modernist spirit, precious stones were mingled with ornamental ones for the Mosaïque d’Étoiles clip (in lapis lazuli, sugilite, turquoise and diamonds) and the Arche Solaire, a cuff bracelet in twin loops of mauve sapphires, coral and diamonds.

At Boucheron, Claire Choisne, the house’s creative director, tapped into its archives from the 1920s — in 1925, the house won a grand prize for its display at the era-defining Exposition Internationale des Arts Décoratifs et Industriels Modernes — for a collection titled Histoire de Style, Art Déco that focuses on emeralds, white diamonds, onyx and rock crystal.

Ms. Choisne also used the house’s tradition of transformable jewels as a way to bridge past and present. The ’20s-era garçonne met modern-day gender fluidity in a cravat-style necklace with a Zambian emerald weighing slightly more than eight carats that could be worn as a tie, necklace, pendant or pin. (Boucheron’s video presentation also reflected the times: A male model was shown wearing some of the pieces, including using the Ruban Diamants ribbon as a belt.)

And a commission from 1928 — ordered by the gem-loving Maharajah of Patiala — was reprised in a three-strand transformable necklace set with diamonds, onyx and more than 1,071 carats of Zambian emerald beads that the house said took four years to gather.

Cartier also brought together emeralds, diamonds and onyx in the spirit of archival pieces dating to the early 1900s. Presented as an extension of the [Sur]naturel collection unveiled in July, the new pieces included a stylized take on the peacock feather, with a pendant necklace in diamonds, onyx, emeralds and a 7.27-carat fancy-cut emerald from Ethiopia. The pendant may be removed and worn as a fully articulated shield ring, covering most of the finger.

The Louis Vuitton logo as it appears today — the italic L beneath the dominant V — was devised by Gaston-Louis Vuitton in the Art Deco years. That V shape defined Pure V, an eight-piece collection from the house’s artistic director of watches and jewelry, Francesca Amfitheatrof. To be unveiled in March, the designs have an Art Deco feel and openwork techniques, rendered in diamonds and onyx. (Vuitton also is introducing a bespoke high jewelry option.)

Chanel’s high jewelry collections often reference Gabrielle Chanel. And this season, Venice — as she might have experienced it in the 1920s and 1930s — was the starting point for Escale à Venise. But in contrast to the house’s first homage to Venice, a 2013 collection called Sous le Signe du Lion, this 70-piece grouping zooms in on architectural and cultural details ranging from gondoliers’ boater-style hats to gelati.

For example, a Byzantine mosaic of the celestial vault, the backdrop for the golden Lion of St. Mark high above the entrance to Venice’s basilica, appears on the Constellation Astrale articulated bib necklace. Two layers of lapis lazuli were meshed, yet look like free-floating fragments — as if part of the basilica’s pediment had been broken off and set with diamonds and a 4.47-carat yellow Ceylon sapphire mounted into a stylized star.

For the most recent piece in her 15th anniversary collection, Cindy Chao set rose-cut diamonds into a base sculpted to resemble a Diphylleia (commonly called a skeleton flower), with a conch pearl center, lacquered stamens and the illusion of petals in movement. The brooch, ring and earrings with the design are being presented digitally, as well as by appointment in the designer’s private salon, opened in November in Shanghai.

On March 2 Dior intends to reveal RoseDior by Victoire de Castellane, the house’s creative director of fine jewelry. The collection, a tribute to the queen of flowers and a nod to Christian Dior’s passion for gardening, is to have 54 pieces, all blossoms with their shiny and matte textures. One example is the RoseDior Jaune de Naples earrings in gold and white and yellow diamonds with openwork petals that recall stained glass, angled settings, overlays and stones arranged to resemble veins. On March 18, the collection is scheduled to be presented in Shanghai.

The pandemic made 2020 a year of transformation for every jewelry house, with some moving more of their sales efforts online — even for high jewelry — and others welcoming new leadership.

De Beers has presented its first high jewelry collection under the direction of Céline Assimon, the former chief executive at de Grisogono who took the top spot in August. Called Reflections of Nature, the five parures — sets designed to be worn together — were named for locations in Africa. Highlights include the Okavango Grace fringed parure, which uses rough and polished diamonds in shades of white, green, gray and pink, and in various settings. In early February, the collection is to travel from the business’s London headquarters to Shanghai. (And last May, the house introduced a website in an effort to woo customers online for fine jewelry purchases, ranging from 15,000 euros to 100,000 euros, or $18,170 to $121,145.)

This spring, Repossi is to present its first high jewelry collection codesigned by Gaia Repossi and the brand’s studio director, Matthias Schneider. Serti Inversé was named for a new style of setting in which gems have a high position, as if they were sitting on waves. Eight pieces are to be shown in Paris in March and via the brand’s new digital showroom.

In December, Graff — home to many of the world’s biggest diamonds — introduced its online boutique, featuring picture galleries of famous gems weighing more than 100 carats, as well as one-of-a-kind solitaires and watches. Listed prices are as much as 1.2 million pounds ($1.6 million) for a 10.32-carat cushion-cut diamond ring, which may be purchased through the site.

In the spring, Graff is scheduled to debut a new high jewelry collection. And on Feb. 15 it is to introduce Tilda’s Bow, a 30-piece collection of pavé-, pear- and baguette-cut diamonds set in the shape of ribbon bows. Prices range from $12,000 to $400,000, and all pieces will be available for purchase online.

Lorenz Baumer, one of the few independents left on the Place Vendôme, showed the Nébuleuse bracelet, with a 32.29-carat purple tourmaline and multicolored sapphires set in white gold that was finished in black rhodium. Mr. Baumer, who produced just two pieces this season, moved into e-commerce last June in response to pandemic-related travel restrictions.

His neighbors in Paris, including Boucheron and Repossi, also say they will bolster e-commerce operations this spring.

Which means that, in terms of a new era, 2021 just may be the year the world finds out exactly how much high jewelry customers are ready to spend in the digital space.

The Best Lube for Every Level of Freakiness

How to Diagnose Page Ranking Declines: Ask An SEO via @tonynwright