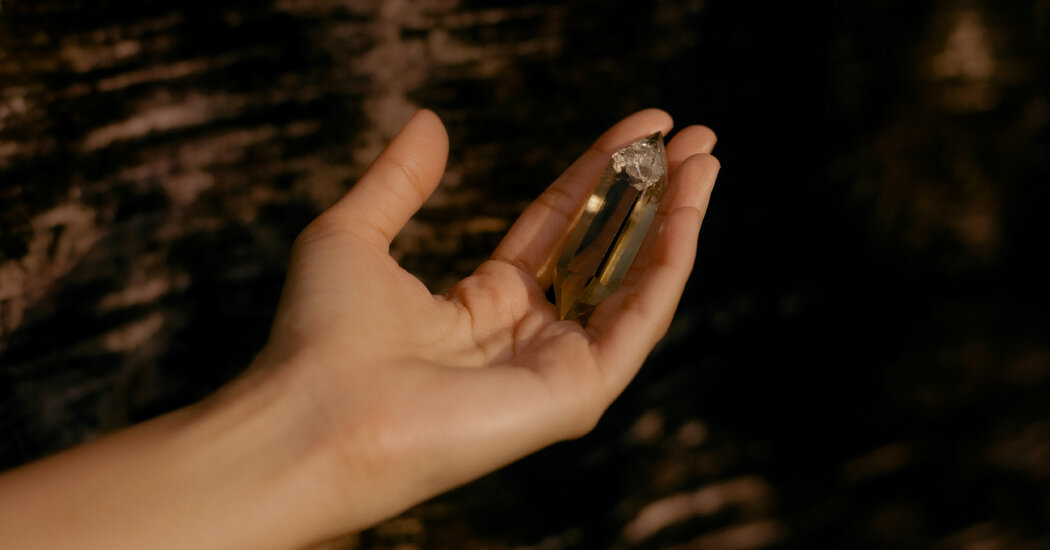 Do you believe that it is possible to make good things happen for yourself simply by thinking about them? Have you ever tried?

If so, you are among the many members of Gen Z who practice manifesting, or “achieving material and psychic rewards through sheer force of mind.”

Do you think that this method of positive thinking is a helpful tool for coping with uncertainty, especially during the coronavirus pandemic? Or do you agree with some critics of the practice, who argue that it is an unrealistic fad embraced by misguided or entitled practitioners?

In “Manifesting, for the Rest of Us,” Ruth La Ferla writes about the manifesting trend among young people:

By the time he was 9, Jerome Lamaar had learned how to seize on his heart’s desire. “I was hoping to get my hands on the Power Ranger Flip Heads,” said Mr. Lamaar, a 35-year-old, Bronx-bred fashion designer. “I never told anyone, but I wanted these toys so bad. I sat in my room holding this scenario in my head of how I would feel when I got them.”

He had, in his New Age-tinctured phrase, “launched his dreams into the universe.” And, as he tells it, the universe heeded his call. “The very next day, my dad got me the Flip Heads,” he said. “That’s when I realized that there was something to this.”

He could not have named it at the time, but Mr. Lamaar says now that he was manifesting — achieving material and psychic rewards through sheer force of mind.

Part magical thinking, part struggle for agency at a time when it is in short supply, the practice he described, an eons-old variant of positive thinking — or at least the term that describes it — has re-entered the mainstream.

Manifesting sits alongside a smattering of belief systems — astrology, tarot, paganism and their metaphysical cousins — being resurrected by a youthful generation in the name of wellness. “For Gen Z in particular, it can be a form of self-soothing,” said Lucie Greene, a writer and trend forecaster in New York. “It’s a way to make sense of things in a moment where nothing makes sense.”

This born-again phenomenon is dismissed in some quarters as little more than a quarantine fad, “like bread baking, tie-dyeing or learning TikTok dances,” as Rebecca Jennings put it in a recent post on Vox. “Shut up I’m manifesting,” she said, “has become one of the defining memes of 2020.”

Its practitioners, in contrast, view it as a coping mechanism, a legitimate alternative that organized religion or psychotherapy may not always provide. The “law of attraction,” a belief that your experiences have a direct correlation to your thoughts, is one aspect of Princess Asata Louden’s spiritual practice. Others include journaling and meditation, which Ms. Louden, a 24-year-old dancer and graduate student at U.C.L.A., likes to perform by candlelight or near an open window.

“I also communicate with my ancestors and spirit guides,” Ms. Louden said, rituals that make her feel “divinely protected and guided.”

“Manifesting has gotten me through all of this pandemic stuff,” said Ms. Louden, who goes by the stage name Sygga. She is not religious but takes on faith “that we have this power to manipulate energy.”

Many of her contemporaries preach a similar gospel of self-realization on YouTube, TikTok and other social platforms. These days the internet teems with their slogans and self-affirmations: “Receiving blessings from the universe like,” or “There’s no competition when you’re manifesting in your own lane.”

The article also explores critiques of manifesting, particularly that its mainstream adoption is grounded in white privilege:

The law of attraction is tainted as well by an undercurrent of racism, one obvious enough to have spawned its own meme, “Maybe you manifested. Maybe it’s white privilege.”

Manifesting “feels entitled and dirty,” Ruth Anne Stearns posted on Medium, going on to assert that its promise of wealth and abundance is grounded in “the real advantage that you live in this white body, in this time and place that you have tremendous resources which most of the world does not have.”

Manifesting carries an implicit rebuke to members of impoverished or disenfranchised communities, said Denise Fournier, a psychotherapist in Miami. Subtle or not, the message is insidious. “It’s ‘Why aren’t you manifesting a trip to Tulum? Why aren’t we seeing you on Instagram. You must not be a good manifester.’ That’s problematic,” she said.

Students, read or listen to the entire article, then tell us:

eBook Release: Working From Home—How To Maximise The Remote Training And Development Of Your Colleagues

How to Launch a National/International Google Ads Campaign the Right Way? via @navahf