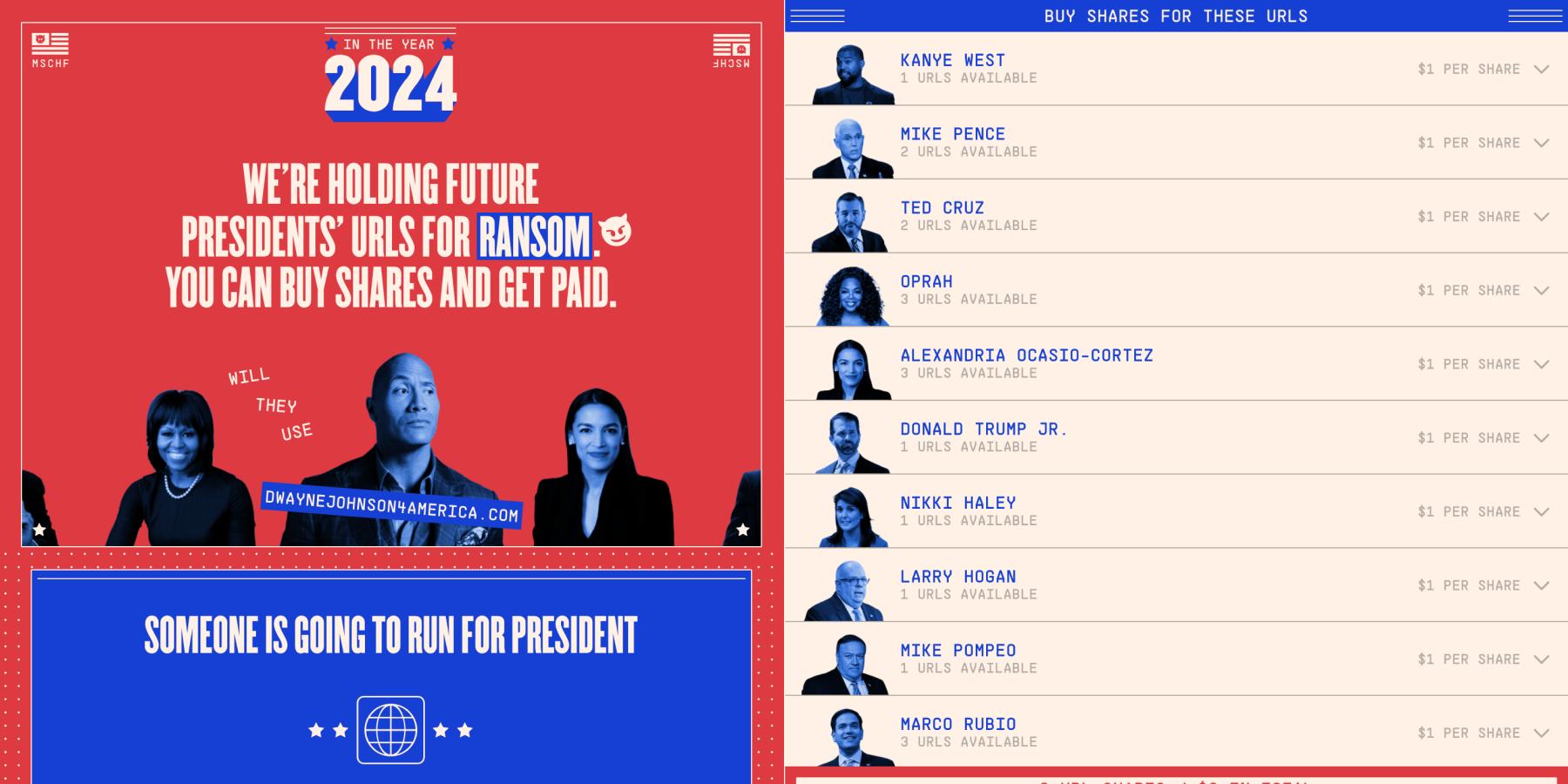 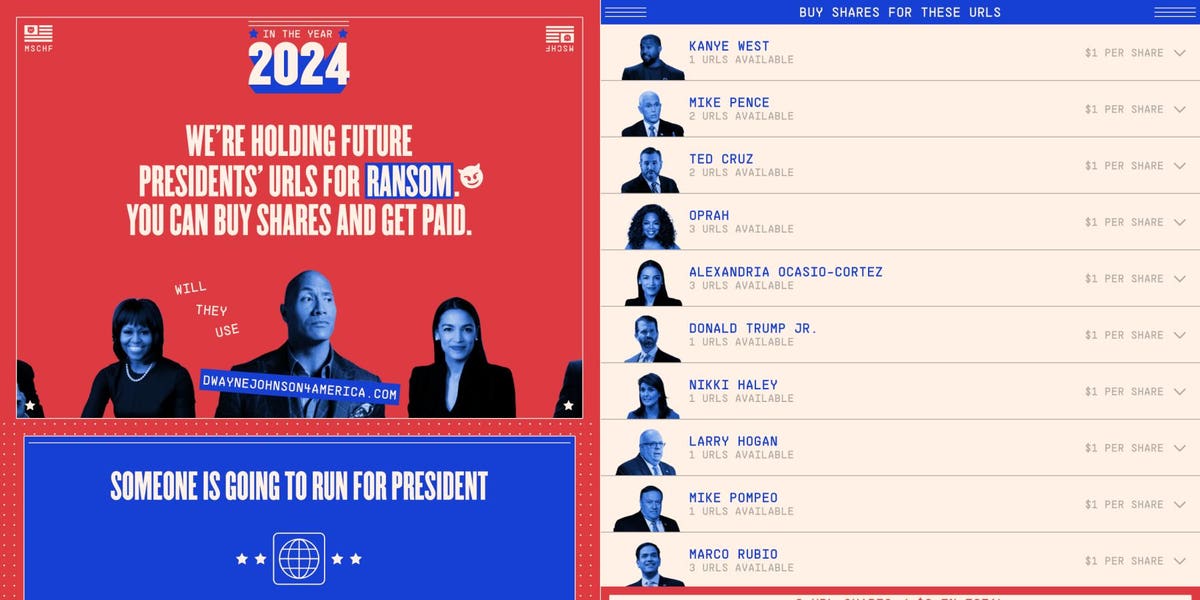 Well, we made it. The last old white man is gone and the new old white man is here. Another Presidential election (admittedly unlike many before it) has left us with a new President (and a history-making Vice President). So naturally, it’s time to start thinking about the 2024 election and since it’s the 21st century, the domain URLs needed to secure the digital outreach portion of said campaigns.

Which is the only thing that In The Year 2024 is concerned with. It has scooped up as many likely domains as possible, in order to sell shares in the likelihood of those domains at some point in the next four years being purchased by a Presidential campaign. From The Rock, AOC, Oprah, Ted Cruz and Kanye, these domains will hopefully be sold for thousands, delivering a percentage to anyone who bought shares in the domains.

That’s the basic concept of this latest project from digital social disruptors MSCHF. Buy a bunch of domains that people might want, sell pieces of them to (raise money) make a political point. It’s domain squatting in its purest form. There are 100 shares of each domain available for sale, domains that if desired by the political candidates will be purchased for an undisclosed amount of money. The question is, does anyone actually want these domains?

Some of these domains for sale are a stretch, but not outside the realm of reality. Many use the number four instead of the word (like MittRomney4America.com), but many are what we’d expect from a Presidential campaign (ElectBooker.com). Politicians know the importance of snagging domains as early in the game as possible, so its very feasible to imagine these domains paying out at some point. With these domains, it’s possible to make some serious, if not ethically questionable, money.

Ethics is just one part of it, as domain squatting hovers between legal and illegal, depending on the power of lawyers, intent and fair use. Often, celebrities and corporations simply pay the ransom instead of taking it to court, which is what MSCHF is counting on.

“As they say in the real estate business: location, location, location! And when it comes to URLs, mostly available for paltry sums and entirely unique, well: it’s free real estate,” reads the manifesto on the website. “Pre-buying political domains is like laying a predictive minefield: a sale can potentially detect actions in advance of announcements. Domain squatting is a plague: conniving scamsters seize premium land and prevent growth. If you don’t have a good idea for cookies.me, don’t stop someone else from taking it! Of course our defense is that we DID have a good idea, and this is it.”

As we’ve learned the past several Presidential campaigns, the polls have been a bit of a mess. It’s much easier to rely on the betting markets for the outcome, rather than the polls. These markets affect whatever they are related to, more so than polls. As is the case with domain names. The more domains a possible political candidate is scooping up, the more likely they are to consider a run for that office, thereby affecting the markets in return. Domain registration (and eventual use) plays a huge part in political campaigns. And it’s a much more savvy move to not threaten domain holders in court, which can result in negative press, and just purchasing the domains quietly instead.

In The Year 2024 is another in a long line of sociological disruption projects, now bordering on sociopolitical, from MSCHF. This is what society needs though, a group of well-funded troublemakers holding up the mirror to society as often as possible. It’s both exhausting and inherently necessary for us to be able to experience the chaos of the world we live in through a generally creative lens. Politics in the United States is a money game; the rich, ruling class often holding all the cards. At least this gives us serfs a chance to profit off their profiteering.