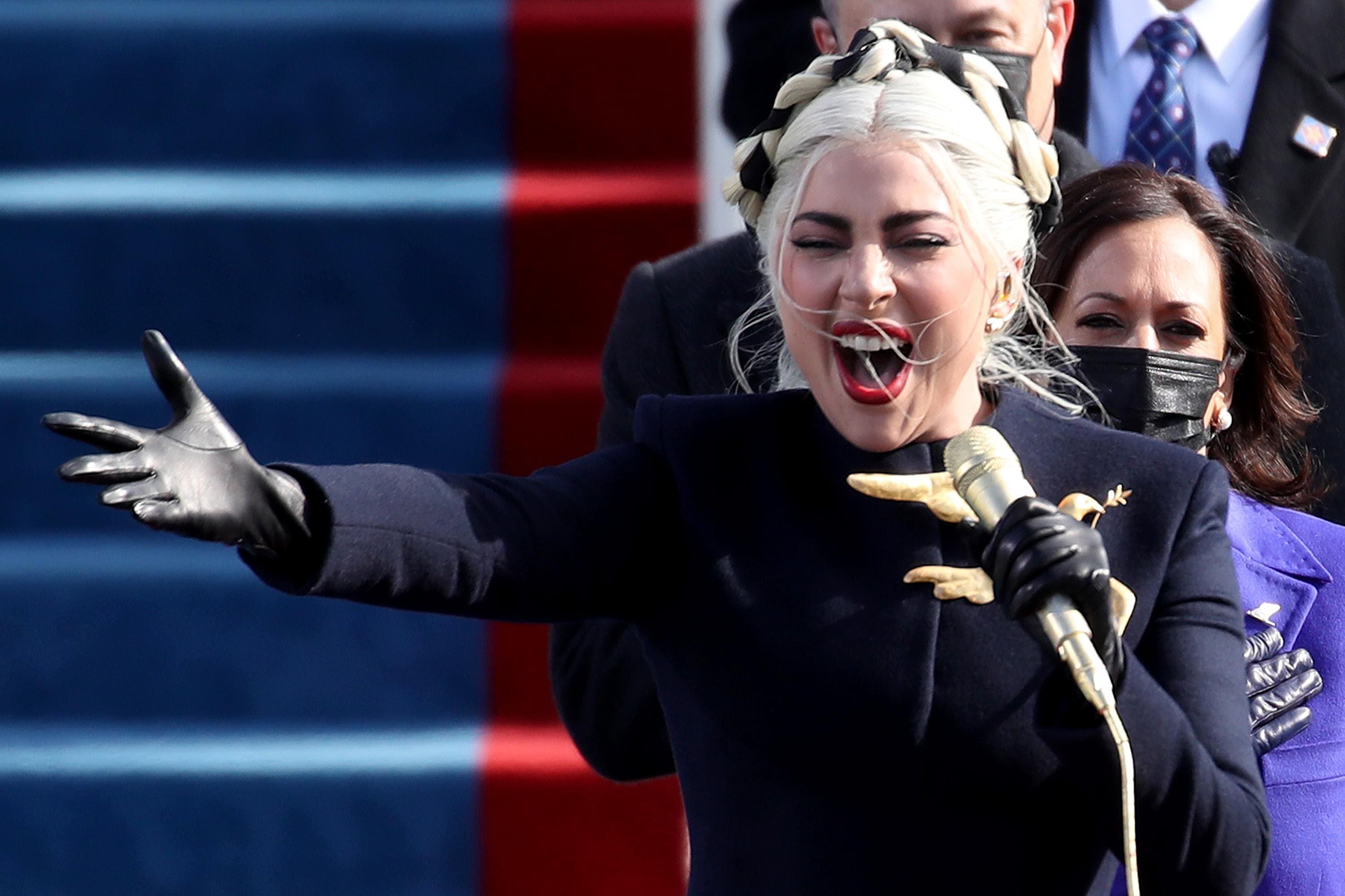 Over the past four years there were numerous comparisons of the Trump administration to that of Gilead, the religiously-dominated totalitarian state in the Hulu original series The Handmaid’s Tale, based on the novel by Canadian author Margaret Atwood.

Now it seems that the United States hasn’t become Gilead – no, we’re living in Panem, the totalitarian state from The Hunger Games series – at least that was among the comparisons that were noted on social media after President Joe Biden was sworn in as 46th President of the United States. It isn’t actually anything President Biden did or said, but rather the attire of singer/actress Lady Gaga for her typically unusual choice of wardrobe when she arrived to sing the national anthem.

Along with a golden microphone that suggested American nobility, her outfit was accessorized with gloves and jewelry that included a large golden dove brooch – meant to symbolize peace and unity, but as many on social media quickly pointed out it appeared similar to the symbol seen in the popular movie version of The Hunger Games.

@BaileyCarlin concurred “Huge hunger games energy from Lady Gaga” sharing a photo from the inauguration and one from the film.

@d0ngc0pter found some humor in the moment, tweeting, “The 46th annual hunger games are underway! May the odds be ever in your favor”

@_Book_Of_Eli offered a snarky retort, “Keep tweeting like this and Lady Gaga may pull your name for the Hunger Games”

It was a bit of humor, but even here there seems to be just a hint of bias in all of this. There was no real criticism, and in fairness the Oscar and Emmy-winning Lady Gaga has remained largely a class act – despite the unnecessary gold microphone.

However, when the United States Space Force had unveiled its new flag just under a year ago, it was former President Donald Trump who was called out for its apparent resemblance to the Star Fleet Command symbol from TV’s Star Trek.

Many users took to social media to mock the president with Star Trek has-been George Takei (@GeorgeTakei) among them, “Ahem. We are expecting some royalties from this…”

Perhaps it is a good thing Takei only boldly went as far as a sound stage, because other users were quick to note that the United States Air Force Space Command used the delta wing symbol since it was created in 2005 – long before Trump took office.

And yet, even at the inauguration the very false connection to the TV show was noted. @EmpTigerstar tweeted, “We’re now going to be seeing a star trek style Space Force logo at every major political speech event from now on. Still weird.”

@Kbeninato even called out the symbol in a tweet earlier this month when it was announced the Biden administration would retire “Operation Warp Speed,” and noted, “Should never have plagiarized Star Trek in the first place. Maybe Space Force can return their logo, too.”

Science journalist Hank Lacey (@COScienceWriter) fortunately stepped up to set the record straight, “Actually, though, the Space Force logo draws from the delta design that has been part of Air Force space-related commands since the early 1960s.”

Moreover, it has been acknowledged that designers for Star Trek copied the Air Force’s space-related designs!

Yet, even if the symbol had been introduced a year ago, it wouldn’t have been President Trump who designed it. Did people think Trump was even more hands-on than that the Saturday Night Live caricature of President Jimmy Carter who was hands-on in every detail of government?

There are actually military offices that design official symbols and those are all but rubberstamped by the time it reaches the desk in the Oval Office.

Fun aside, this latest example how the political divide we face has managed to get into even the smallest details of life and make a big deal out of it. When it is Lady Gaga signing to President Biden with the golden microphone there were no suggestions that it was unnecessary gaudy or an indulgence of wealth when so many are hurting.

Nor were there any ominous warnings that we’ll lose our democracy even as the newly sworn in POTUS has said he’d spend the day issuing executive orders.

And yet when a symbol was just a little close to something from a strangely beloved TV show President Trump was mocked, just as his administration was compared to the fictional Gilead. It is hard to accept that there can ever being healing when it isn’t a level playing field even for simple mockery.