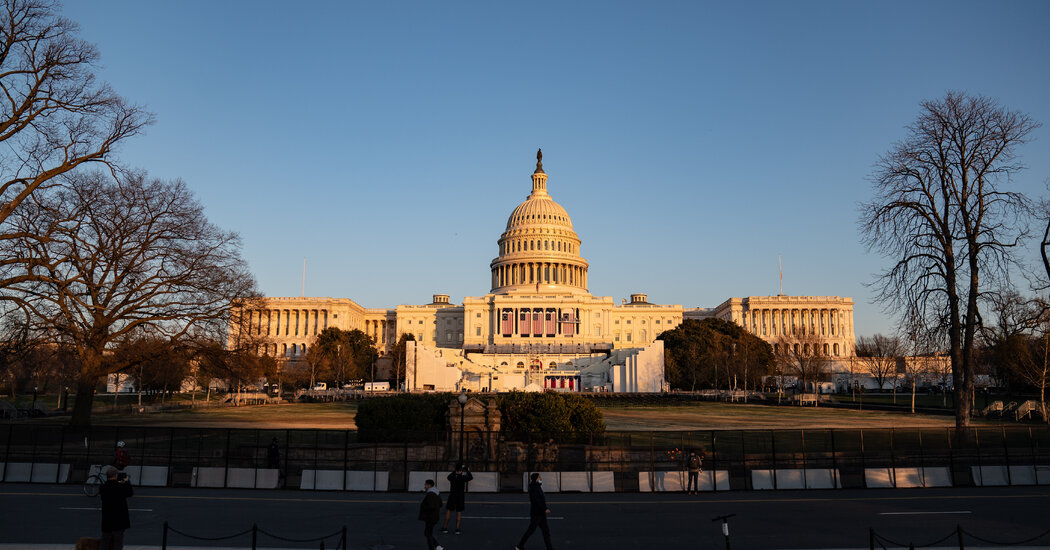 The House of Representatives has already voted to impeach the president, with 222 Democrats and 10 Republicans voting in favor; 197 Republicans voted against the resolution. In “Trump Impeached for Inciting Insurrection” Nicholas Fandos writes:

Donald J. Trump on Wednesday became the first American president to be impeached twice, as 10 members of his party joined with Democrats in the House to charge him with “incitement of insurrection” for his role in egging on a violent mob that stormed the Capitol last week.

Reconvening in a building now heavily militarized against threats from pro-Trump activists and adorned with bunting for the inauguration of President-elect Joseph R. Biden Jr., lawmakers voted 232 to 197 to approve a single impeachment article. It accused Mr. Trump of “inciting violence against the government of the United States” in his quest to overturn the election results, and called for him to be removed and disqualified from ever holding public office again.

The vote left another indelible stain on Mr. Trump’s presidency just a week before he is slated to leave office and laid bare the cracks running through the Republican Party. More members of his party voted to charge the president than in any other impeachment.

Speaker Nancy Pelosi of California, declaring the past week one of the darkest chapters in American history, implored colleagues to embrace “a constitutional remedy that will ensure that the republic will be safe from this man who is so resolutely determined to tear down the things that we hold dear and that hold us together.”

A little more than a year after she led a painstaking, three-month process to impeach Mr. Trump the first time for a pressure campaign on Ukraine to incriminate Mr. Biden — a case rejected by the president’s unfailingly loyal Republican supporters — Ms. Pelosi had moved this time with little fanfare to do the same job in only seven days.

“He must go. He is a clear and present danger to the nation that we all love,” the speaker said, adding later, “It gives me no pleasure to say this — it breaks my heart.”

The top House Republican, Representative Kevin McCarthy of California, conceded in a pained speech on the floor that Mr. Trump had been to blame for the deadly assault at the Capitol. It had forced the vice president and lawmakers who had gathered there to formalize Mr. Biden’s victory to flee for their lives.

“The president bears responsibility for Wednesday’s attack on Congress by mob rioters,” said Mr. McCarthy, one of the 138 Republicans who returned to the House floor after the mayhem and voted to reject certified electoral votes for Mr. Biden. “He should have immediately denounced the mob when he saw what was unfolding.”

Outside the House chamber, a surreal tableau offered reminders of the rampage that gave rise to the impeachment, as thousands of armed members of the National Guard in camouflage fatigues surrounded the complex and snaked through its halls, stacking their helmets, backpacks and weapons wherever they went. Their presence gave the proceedings a wartime feel, and evoked images of the 1860s, when the Union Army had quartered in the building.

The House’s action set the stage for the second Senate trial of the president in a year. The precise timing of that proceeding remained in doubt, though, as senators appeared unlikely to convene to sit in judgment before Jan. 20, when Mr. Biden will take the oath of office and Mr. Trump will become a former president.

The last proceeding was a partisan affair. But this time, Senator Mitch McConnell, Republican of Kentucky and the majority leader, was said to support the effort as a means of purging his party of Mr. Trump, setting up a political and constitutional showdown that could shape the course of American politics.

In the months preceding the Joint Session, President Trump repeatedly issued false statements asserting that the Presidential election results were the product of widespread fraud and should not be accepted by the American people or certified by State or Federal officials. Shortly before the Joint Session commenced, President Trump, addressed a crowd at the Ellipse in Washington, D.C. There, he reiterated false claims that “we won this election, and we won it by a landslide.” He also willfully made statements that, in context, encouraged — and foreseeably resulted in — lawless action at the Capitol, such as: “if you don’t fight like hell you’re not going to have a country anymore.” Thus incited by President Trump, members of the crowd he had addressed, in an attempt to, among other objectives, interfere with the Joint Session’s solemn constitutional duty to certify the results of the 2020 Presidential election, unlawfully breached and vandalized the Capitol, injured and killed law enforcement personnel, menaced Members of Congress, the Vice President, and Congressional personnel, and engaged in other violent, deadly, destructive and seditious acts.

Either based on this excerpt, or the entire resolution, which words or phrases can you cite to support your opinions about the impeachment proceedings? If you disagree with the text in the article of impeachment, why?