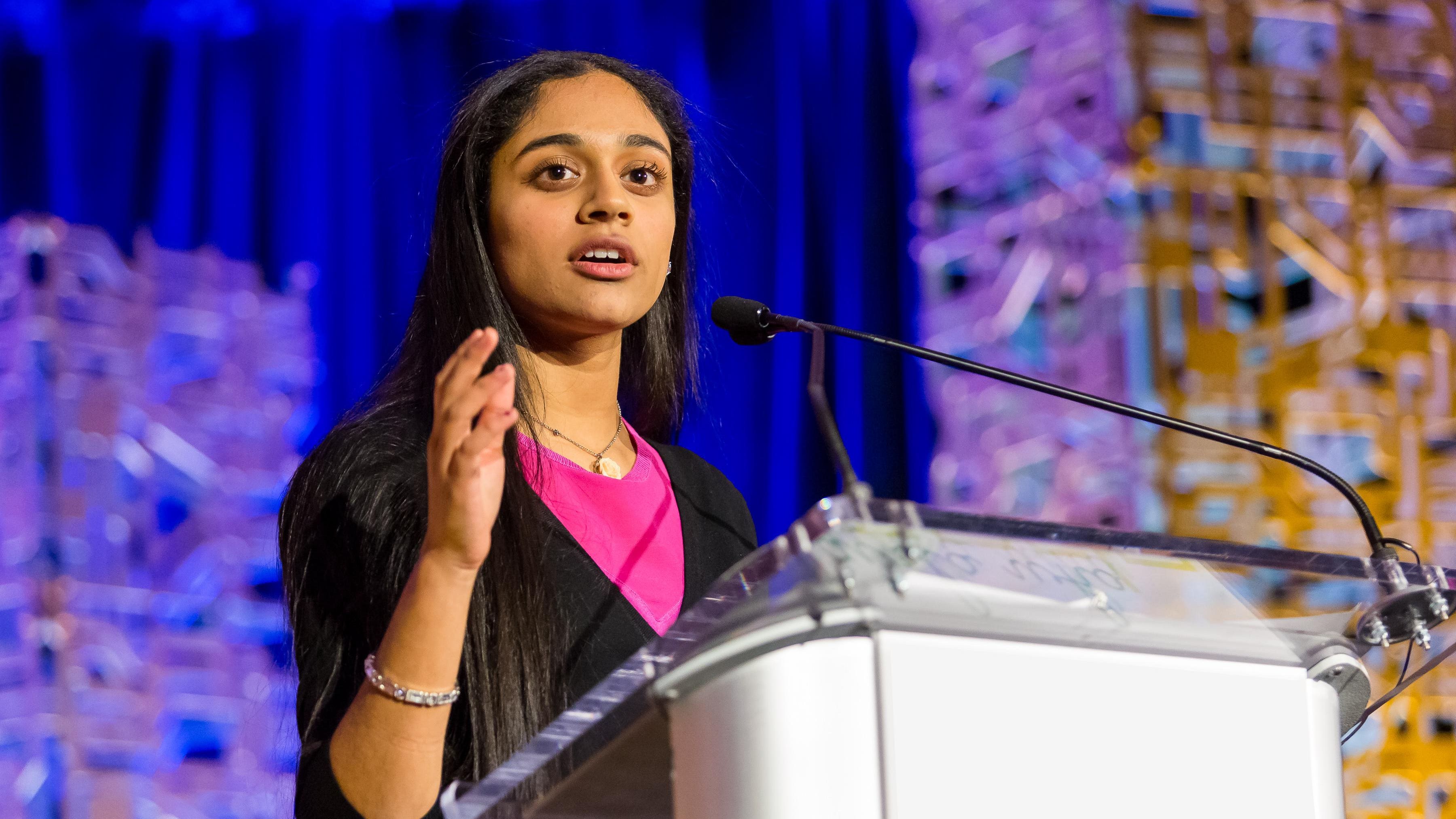 In 2013, Trisha Prabhu was a 13-year old student when the 12-year-old Rebecca Sedwick,who had been cyberbullied and receiving mean messages and had climbed to the top of abandoned cement factory silo and jumped off, tragically taking her own life.

For Prabhu it was personal. Not only had the two been about the same age, but Prabhu had herself been a victim of mean messages, and as a first generation immigrant whose parents came from India, she often felt a sense of alienation.

When Prabhu read the news and realized the reason behind Sedwick’s suicide was cyberbullying, she remembered thinking something was wrong with the Internet, and it felt like a lot of the adults working on these issues really couldn’t get to the core of it.

“They were encouraging young people to report the cyberbullying and taking all these reactive approaches,” Prabhu says. “As a young person as a member of Generation Z who had spent a lot of time on the phone who knew what it meant to be harassed I knew those approaches weren’t gonna work — they were fundamentally flawed.”

So, Prabhu came up with an idea to flip the script. Instead of reactively putting the burden on the victim, she tried to think of a solution to help cultivate the next generation of responsible digital citizens to prevent the insults from happening at all.

As a part of her science fair project in 8th grade she conducted a 1500 people trial scientific study.

Prabhu found out that in 93% of the cases, young people refrained from moving forward with the insult.

After having the “eureka” moment, Prabhu assembled a team of people she knew, teachers, young entrepreneurs, friends and family, and used some of the coding experience she had, along with their experience to create ReThink.

Today, ReThink is a digital platform with patented technology and has been downloaded over 500,000 times on the App Store and Google Play, and is available in six languages.

The way ReThink works is when one downloads the app onto their phone, it replaces the mobile device’s default keyboard with a custom-built keyboard and then it works across all the apps on the phone: email, text, social media. It detects sensitive content before it’s sent and when it does, it prompts the user to double check if they want to proceed.

Prabhu, who is the founder and CEO of ReThink and is currently a junior at Harvard, was recently honored in the 30 Under 30 Social Impact list.

Cyberbullying as a topic has made the news the past few years, as First Lady Melania Trump chose that issue to create an initiative around (through her Be Best campaign). Given her husband’s tweeting habits where he has regularly offended people occasionally calling women “fat, ugly, or lowlife”, Prabhu says that the First Lady’s initiative is “complicated.”

“I think it’s great that a public figure decided to make cyberbullying the focal part of a campaign,” Prabhu says. “Of course it was just difficult because some of the language that her husband models on social media can be hard to reconcile with those efforts.”

According to Prabhu, regardless of one’s political affiliation, people can agree that there are some things the President has said are extremely derogatory.

“It’s the kind of behavior I’m trying to teach young people every day not to engage in,” she says.

Meanwhile, as Prabhu juggles with taking classes at Harvard, working on ReThink, learning Spanish and spending time with her partner, she has also thought about the future of her platform, and how it could one day potentially grow as a business.

Prabhu adds that she wants to keep the app’s basic version free but in terms of monetization, but she’s considering adding features for parents that want more control over what their kids are communicating.

“Maybe, one day we can even partner with a phone carrier to make this technology more broadly available to everyone,” Prabhu says.