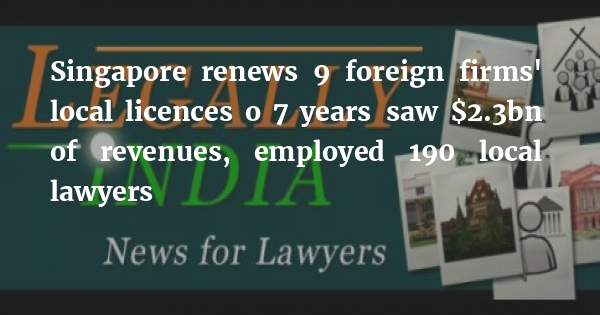 The Singapore law ministry has renewed all nine international law firms’ Qualifying Foreign Law Practice (QFLP) licences for another period of five years, according to a press release by the ministry.

The nine firms employed a total of 190 Singapore-qualified lawyers in their respective Singapore offices.

In early 2019, Singapore had temporarily extended the renewals for a year until 2020, in order to “synchronise the timeline for the first and second batches of QFLPs to better allow the Ministry to assess all the QFLPs’ contributions to Singapore across the board”, Asian Legal Business had reported at the time.

According to the ministry, the present renewals were made on the basis of each firm’s “quantitative and qualitative performance during the licence period relative to its earlier commitments, as well as the firm’s contributions to Singapore”, and considered:

The value of work that the firm’s Singapore office will generate;

The number of lawyers who will be based in the firm’s Singapore office;

The level of training and career opportunities offered to Singapore lawyers; and

The extent to which the Singapore office will conduct the firm’s leadership functions in the region and beyond.

In 2014, Herbert Smith Freehills had decided not to renew its QFLP licence.

People Who Changed Their Lives Are Focus of New Times Series