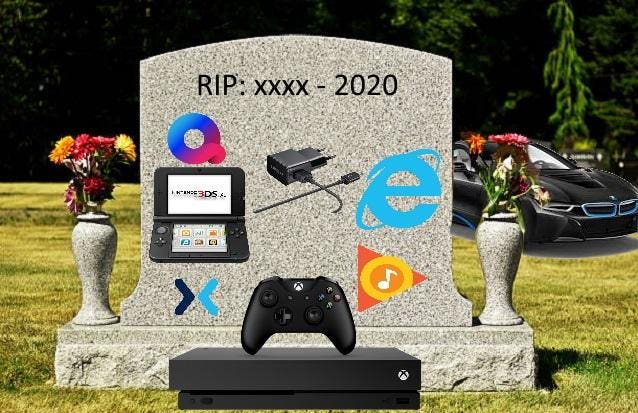 2020 has been a year for the history books. We don’t need a recap at this point, the wounds are too fresh. The headlines were dominated by the COVID-19 pandemic, the lackadaisical government response, and the election. Technology has taken a back seat to sociopolitical issues, but that doesn’t mean it didn’t play a part. We quickly adapted to virtual workspaces, and spent the last quarter of the year hunting for a PS5.

Since 1995 we have looked for and used something better than Microsoft’s Internet Explorer. The butt of many an internet speed joke, IE seemed to be stuck in the 90s for a long time. Last updated in 2013, outmoded by Microsoft Edge, this year Microsoft finally outlined its plan for the death of IE. As of November 30th of this year, Teams ceased support of IE. It won’t be until next year that Office 365 ceases support of IE, but we’ve already instructed Google Chrome to start shoveling on the dirt. Firefox is reading the eulogy, and Safari is already at the buffet. We’ve been done with IE for a long time, and now Microsoft is as well.

While Sony hasn’t confirmed it’s ending production of the PS4 Pro, its removal from the Sony storefront would suggest it has been discontinued. What has been discontinued this year were the previous Xbox models, making way for the Xbox Series X. Microsoft ended production of the Xbox One X and Xbox One S earlier in the year. To that end, it hasn’t been too difficult to procure a Series X machine, while getting our hands on a PS5 has been next to impossible. Perhaps one reason might be that PS4 Pro machines are still clogging up the assembly lines. If that’s the case, seems like poor planning from Sony. Regardless, we’ve truly moved into the next, next generation of gaming with the previous consoles becoming garage sale items.

Speaking about gaming systems being outmoded, the very popular Nintendo 3DS was unceremoniously discontinued back in September. This makes sense, as the Switch covers that portable functionality. The 3DS, while not as popular as its predecessor, still sold more than 75 million units worldwide since 2011. Its library of over 1000 games will still be supported, in the sense that gamers can still purchase the games from Nintendo and other retailers. For a lot of younger gamers, this is akin to when Nintendo ceased production on the GameBoy. It was a dark day, as many of us had already become gaming luddites, refusing to accept the colorful world of the Nintendo DS. Naturally, we’re all Switch fanbois now.

It seems that 2020 is going to be the year that phone manufacturers decide that we don’t need any more charging bases in our homes, considering USB charging ports are available in power strips and wall outlets. Time will tell if this is a wise decision, as there are plenty of places around the world that still require a way to charge their phones, but those communities probably aren’t buying $1000 luxury phones. Frankly, if we’re paying that much for a phone, the box should be packed with accessories.

Many of the more cynical streaming service consumers were quite bearish on Quibi from the start. Something just seemed off about this service, as if it was known from the beginning that it couldn’t compete with the fresh Apple TV+ launch, HBOMax, and the current content factories in Hulu, Netflix, and Amazon. So it didn’t come as much of a surprise when it was announced that Quibi would be shutting down in the same year it launched.

Quibi launched with a bit over a billion dollars from major studios and Wall Street firms, in the middle of an pandemic that had forced much of the populace into their homes. For as many people were cutting back on expenses, there were just as many beefing up their at-home entertainment options. Yet, Quibi couldn’t find a place in all this. For anyone looking to launch a streaming service, it could be a case study in what not to do.

Microsoft could never find the audience it wanted with Mixer, not in a world dominated by Twitch, YouTube, and Facebook Gaming. It’s the latter that received Mixer’s streamers and partners earlier this year. This was a strategic decision to push a xCloud integration with Facebook Gaming. Mixer is another example of competing in the streaming world while seemingly ignoring the organic nature of streaming popularity. It’s a giant shrug emoji in the annuls of game streaming.

It’s the end of an era as it pertains to visual design on the internet. Adobe’s Flash player was the tool of choice for many years as it relates to internet gaming and animations. Eventually it became the tool of necessity, then the tool of last resort. Its death marks a new era of animation tools, led once again by Adobe products that aren’t Flash. Aside from Adobe Animate, HTML5 and CSS3 have become the go-to replacements for Flash over the years, offering a less obstructive, cleaner programming model. It’ll be a while before we’ve successfully cleared Flash from our browser cache, but the internet will be smoother without it.

A bunch of cars

Drivers are back to buying SUVs and Pickups, so that means that the small car revolution is over until we’re all ride-sharing electric vehicles. Some of the smaller cars being discontinued in 2020 include the Chevy Sonic, Toyota Yaris, and the Honda Fit. These cars were introduced during a time of high gas prices, as economic alternatives to larger vehicles. They were tiny little computers that were difficult to repair in the driveway IMO, and we’re better off without these rodents on the road.

Some larger cars are fading off as well, as the tightened purse strings of a pandemic have forced auto manufacturers to take stock and focus on the vehicles people are actually buying. The Cadillac CT6, Lincoln Continental, Chevy Impala (announced in 2018, but production ceased this year), and the Ford Fusion (also announced years ago, but finally phased out this year) are some of the sedan-type cars that we’ll no longer see in new car lots. Family cars like the Dodge Grand Caravan and Journey have joined them in future obscurity.

One failure that should be noted is the BMW i8. It was supposed to be the luxury electric model for people that felt the need to both show off their massive monthly car payment alongside their care for the environment. But Tesla has captured enough of the wholly electric market that BMW was unable to push the i8 into market acceptance. So back to the drawing board there.

The list of discontinued car models continues with the Acura RLX, Ford Mustang Shelby GT350/GT350R, Honda Civic Coupe, Jaguar XE, Lexus GS, and Lincoln MKZ. Don’t fret, there will surely be another slate of models introduced in the coming years that will last just under a decade.

Finally, we have the annual list of Google products we didn’t even know Google was working on or responsible for. Sometimes we’re aware of the existence of Google products as they are discontinued, such as when it ended free photo storage. The majority of this list, well, they are things that existed.

The real burn was Google Play Music. This service was replaced by YouTube Music on December 3rd. For those of us who prefer not to stream everything, just playing the music we have physically on our devices, this stung. While YouTube Music does allow playing of on-device files, it requires more navigation and pushes the streaming options. This makes it difficult when you are using an old Motorola Ultra for an in-car music device. It’ll take some getting used to as Google has decided, like with everything else on this list, that Google Play Music is no longer a viable application.

So what will the new year bring in terms of new technology? We’ll likely continue to see software and apps that focus on interpersonal connectivity, while personal entertainment devices permeate Kickstarter and Indiegogo. It’ll be another year before we see a new iPhone since we’re just reaching the first repair cycle of the iPhone 12, but Samsung is poised to release some new rectangles this year. Regardless, one thing is for certain: technology will keep up the churn as humanity does the same.