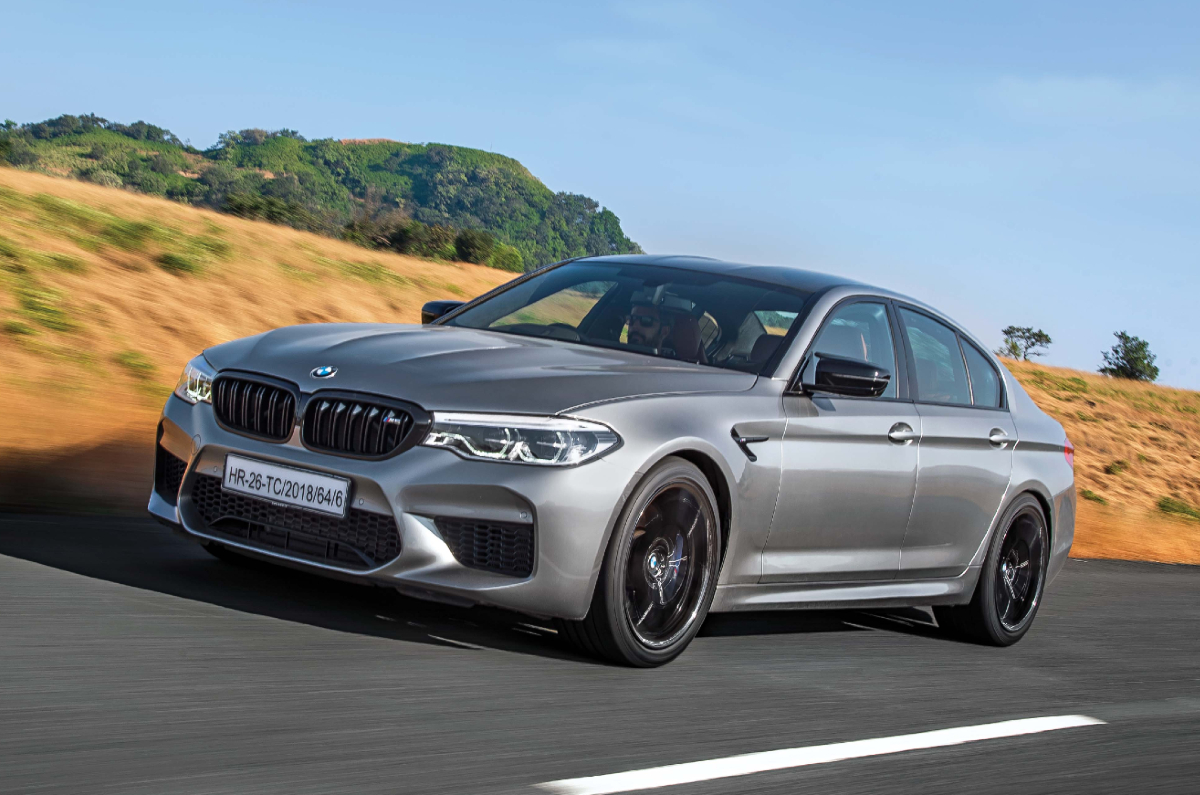 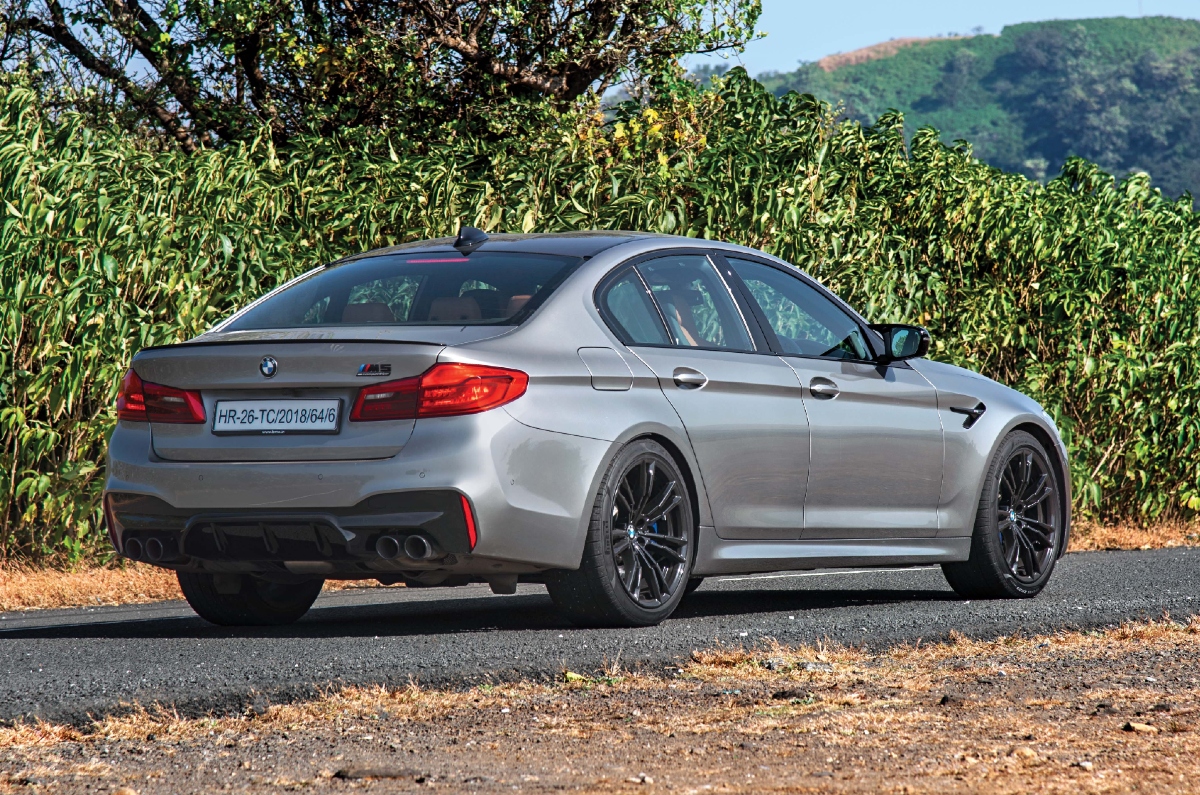 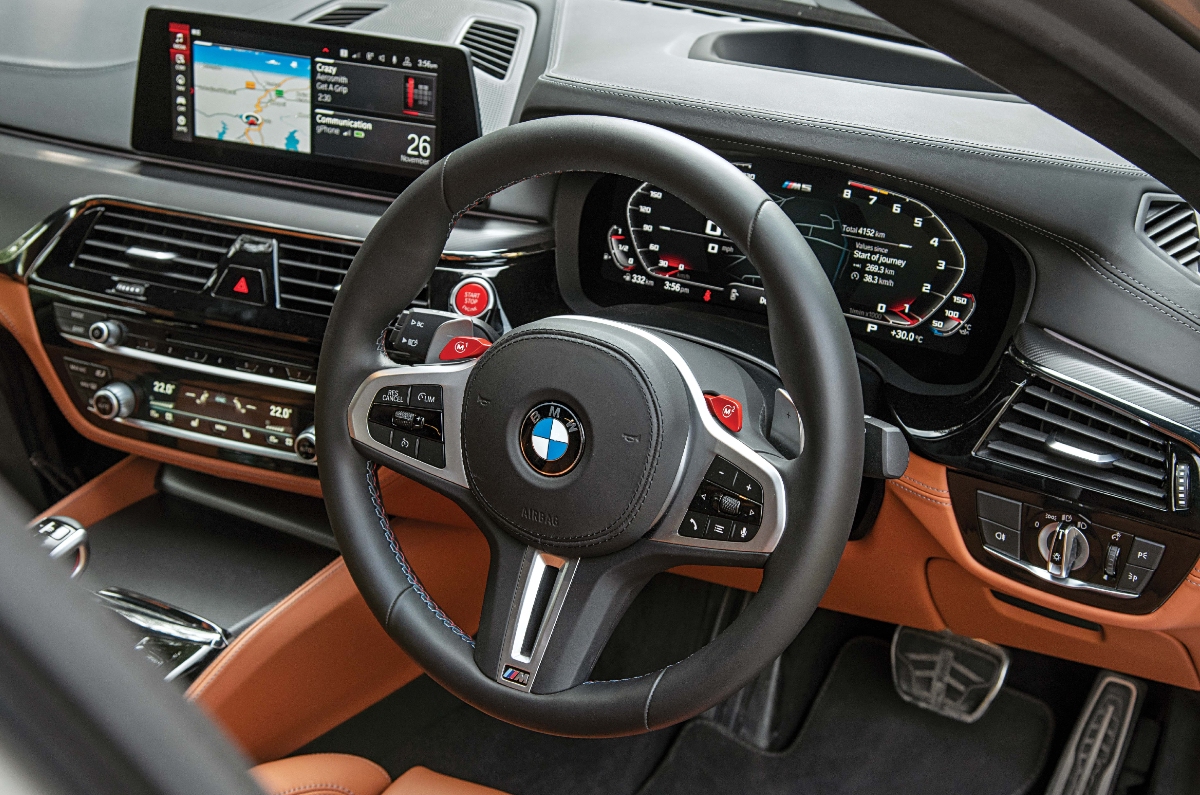 Almost all of BMW’s new-generation M cars are now available globally in two guises – standard and Performance. What the latter gets you is not just more power, but also revised suspension and more of the optional upgrades as standard. BMW India, however, offers only one version of each M model here, and it’s an interesting mix – the freshly launched X5 M is Competition-spec, while the X3 M and M8 Coupé are not. The M5, meanwhile, was launched in standard guise in 2018 and has since been replaced by this Competition version in our market. So what’s changed? 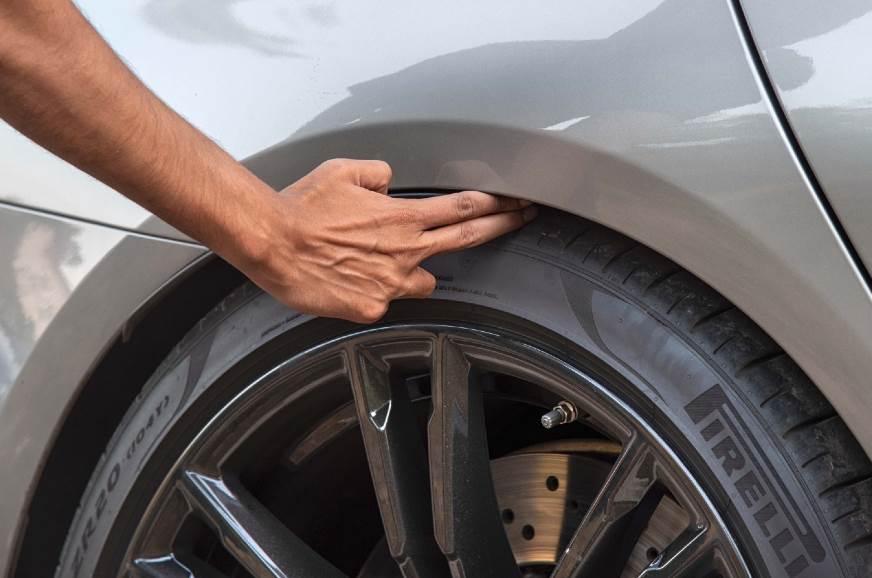 Power is up from 600hp to 625hp, but the torque has stayed the same, at 750Nm, so while it has more power than its rivals in chief, the Audi RS7 Sportback and Mercedes-AMG E 63 S, it still has less torque. Still, the claimed 0-100kph time has dropped by 0.1sec to 3.3sec (we managed it in 3.29, and 200kph in just 10.6!). Stuff that was optional on the ‘regular’ M5 that’s standard now includes the blacked-out kidney grille frame, rear valance and side gills, 20-inch wheels and the sports exhaust. You still have to pay extra for carbon-ceramic brakes though.

The big work has been done in places you can’t see. There are stiffer engine mounts and a revised front suspension with greater negative wheel camber for an altogether more aggressive front end, the rear suspension’s rubber mounts have been replaced by rigid ball joints and there are sturdier anti-roll bars. The adaptive dampers have been recalibrated to suit, and overall ride height is lower by 7mm. In fact, the whole car looks considerably more ‘slammed’ down to the road, and with its long 2,982mm wheelbase, you’d best be careful over larger speed bumps. 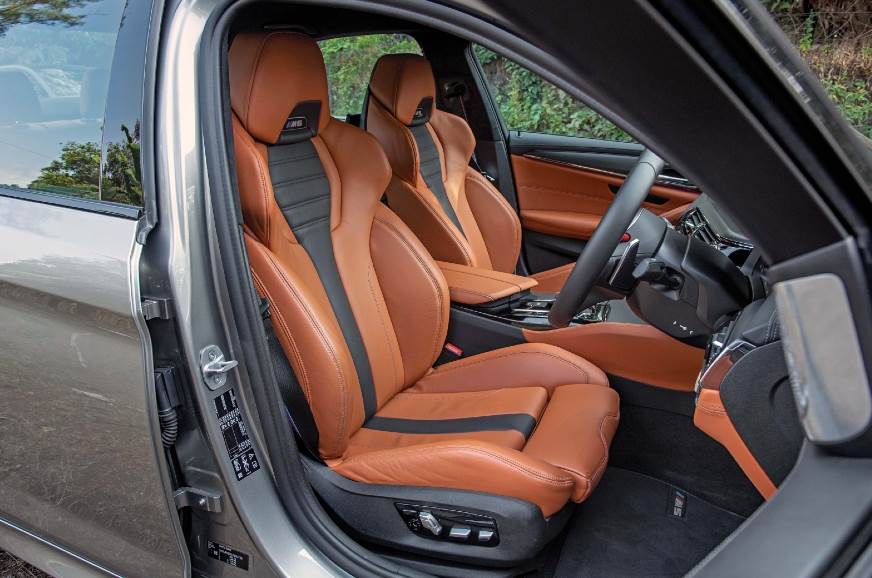 You feel the changes to the suspension almost immediately. The coil-sprung standard M5 wasn’t quite as comfy as the air-sprung E 63 S or RS7 on our typically uneven roads, and this one firms things up even more. The Competition, with its short wheel travel, fidgets about on its 35-profile, 20-inch Pirellis and while Comfort mode is reasonably absorbent (by sportscar standards), Sport or Sport+ are best reserved for pristine roads only. Even out on the Expressway at three-digit speeds (and they would be in an M5), expansion joints do register in the cabin.

So is there an upside to all of this? Oh, you bet! Find a nice road with challenging corners, and the M5 Competition comes alive, with dynamic abilities that can shut up many sportscars. Thanks to that reworked front end and sharper, more responsive steering, this 1.9- tonne Bimmer is almost hilariously chuckable. And even though it does without trickery like rear-wheel steering, it has an inherent agility to the way it’s setup, in true BMW fashion. Body roll? Forget about it. 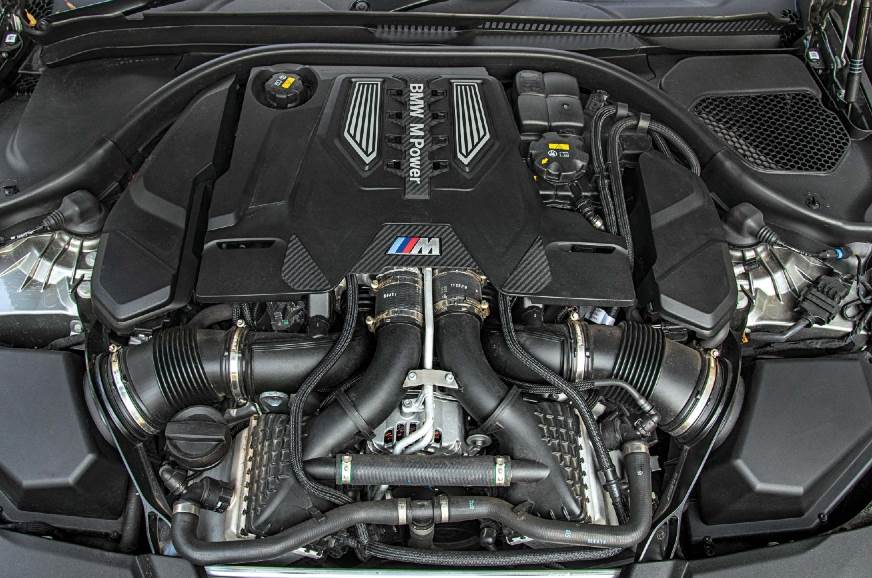 Yes, it too has all-wheel drive, but setting the drivetrain to ‘4WD Sport’ (you have to set DSC to M Dynamic Mode, mind you) transforms it from a safe, traction-focused setup to one that feels deliciously rear-biased. You’re always but an enthusiastic toe-flex away from oversteer in 4WD Sport, and frankly, the optional 2WD mode feels like lip service to old-school purists and show-offs.

I’d love to report that you can feel the extra 25 horses through the seat of your pants, but that’s not the case. I’m not sure you’ll feel the marginally improved engine responses either (the standard car was plenty responsive enough), but what you might notice, given enough road to stretch it out, is that the Competition revs longer and further when you keep your foot in. And though the 750Nm torque figure hasn’t changed, it’s spread over an additional 200rpm now. It may not have the volume and visceral bombast of AMG’s V8, but with its rev-happy nature, the M5’s 4.4-litre ‘S63B44T4’ twin-turbo V8 feels like the perfect mix of modern forced induction and the naturally aspirated days of yore. Also deserving of a shout-out is ZF’s venerable 8HP torque-converter auto, which impressively alternates between the roles of comfy slush-box and razor-sharp performance shifter just by dialling through its three modes. 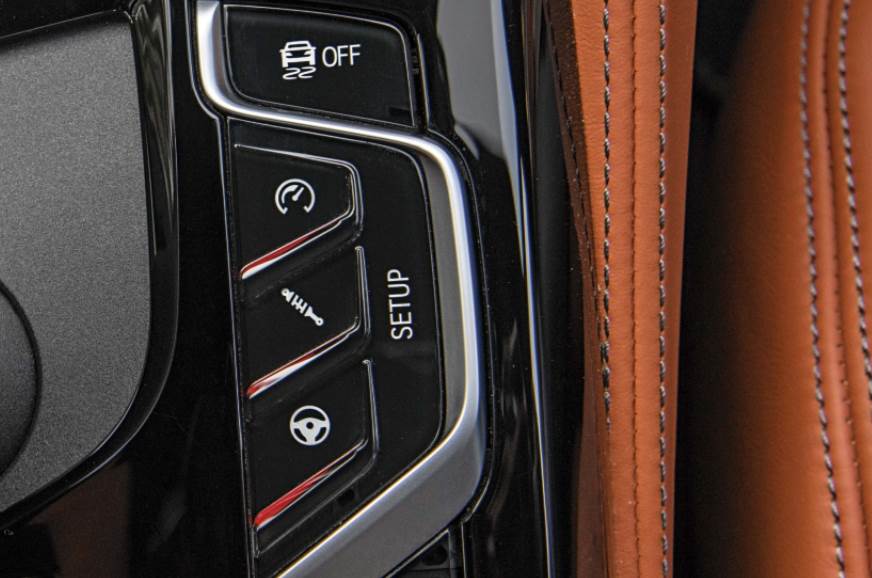 Deconstructed drive modes let you tailor the car on the fly.

With the onslaught of hulking performance SUVs and sleeker, more expensive four-door coupés like the AMG GT 4 Door and Porsche Panamera, it’s good to see the M5 flying the flag high for the classic, sleeper sedan. In its move to the Competition version – though it’s maintained its luxurious cabin and generous equipment list – the more focussed chassis and suspension upgrades mean it’s sacrificed a degree of that everyday usability. As a driver’s car, however, the improvements are greater than the sum of what you’ll read on a spec sheet. It’s far more engaging than before, but also a more serious, more demanding performance car. The good news is, at Rs 1.55 crore, it’s not too much more expensive than the standard M5 it replaced. And with the AMG E 63 S temporarily off sale (until the facelift comes) and other rivals sitting closer to the Rs 2 crore mark, the original performance sedan has a corner of the market all to itself.

Common SEO Problems and How To Fix Them