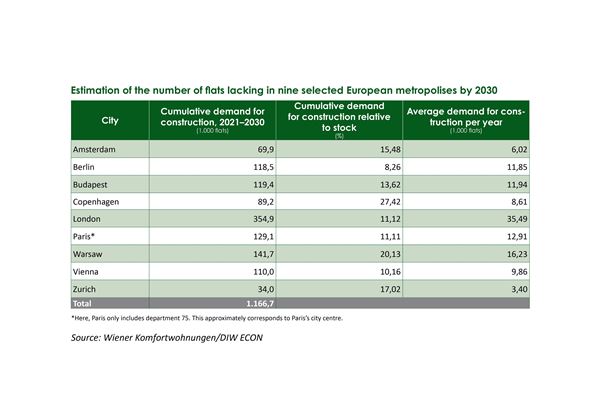 In a study commissioned by real estate developer Wiener Komfortwohnungen, the research institute has investigated how many buildings need to be built in order to meet the demand for space over the next ten years in nine top European cities including Berlin, Amsterdam, Budapest, Copenhagen and Zurich. The calculations also included such factors as projected demographic trends, the expected loss of housing and fluctuation-related vacancy rates. 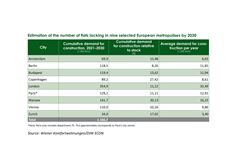 The rationale behind the study was to obtain reliable data on trends in the demand for housing in large and capital cities from a European perspective and to use it to identify the political and economic response required. “The megatrend of urbanisation is a pan-European phenomenon that all major cities must respond to,” explains Alexander Finster, Managing Director at Wiener Komfortwohnungen. “What is required are large-scale joint plans from politics, society and investors to meet the demand for housing.”

Immigration driving demand for housing
The author of the study, Konstantin A. Kholodilin, attributes the gaps identified by DIW Econ between supply and demand by 2030, some of which are quite considerable, to persistent demographic growth in most capitals. The employment and education opportunities as well as the infrastructure and quality of life attract foreign citizens in particular. “Policymakers and urban planners have often underestimated this trend in the past,” says Kholodilin, citing Berlin as an example. “After intensive construction activity up until the mid-1990s, things went quiet as it was assumed that the population would shrink rather than expand.”

Some European cities were late in realising that the available housing was no longer meeting people’s needs. “However, the supply of housing takes time to come into line with demand due to the growing scarcity of land for construction as well as the long and complicated approval processes and the shortage of construction labour,” adds Kholodilin.

The researchers at DIW assume that flat capacities in the core cities have reached their limits, with a trend emerging in favour of smaller flats in view of the rising number of single-person households. Infrastructure such as post offices or bank branches is already being dismantled in inner cities as people are increasingly tending to work rather than live there. Looking forward, Kholodilin thinks that they will – and indeed have to – be replaced to a greater extent by suburban centres offering good infrastructure and transport connections with cities: “The monocentral city is a thing of the past.”

More information can be found at www.wienerkomfortwohnungen.at

Is it still a bad time to buy a house?