United Insurance Holdings Corp (UIHC – Free Report) estimates fourth-quarter 2020 catastrophe loss between $85 million and $100 million before income taxes or between $67 million  and $79 million after tax, net of expected reinsurance recoveries. The estimated loss can be attributed to three named windstorms hurricanes Delta and Zeta, and Tropical Storm Eta as well as other non-named windstorm catastrophe events.

The Zacks Consensus Estimate for the fourth quarter is currently pegged at a loss of 62 cents, indicating a decline of 72.2% from the year-ago quarter reported figure.  We expect estimates to move south once analysts start incorporating loss estimates into their numbers.

On its last quarter’s earnings conference call, the company estimated cat loss from hurricanes Delta and Zeta to be between $50 and 55 million. Nonetheless, the insurer stated that elevated cat frequency is manageable.

The hurricane season typically starts in June and lasts through November during a year, gathering strength in August and September. In a report on Aug 5, 2020, Colorado State University stated that ‘hurricane activity will be about 190% of the average season’.  Being a property and casualty insurer, United Insurance Holdings has substantial exposure to loss from natural disasters, man-made catastrophes and other catastrophic events, which has been inducing volatility in its underwriting results.

The company incurred $187 million in catastrophe loss in the first nine months of 2020, wider than $77.6 million incurred in the year-ago quarter. However, combined ratio deteriorated 860 basis points.

Nonetheless, this property and casualty insurer noted that rate increases and improved risk selection are driving improvements in core earnings power. Also, the company has a reinsurance program in place, helping it to weather cat loss.

Shares of United Insurance Holdings have lost 59.8% year to date compared with the industry’s decrease of 3.9%. 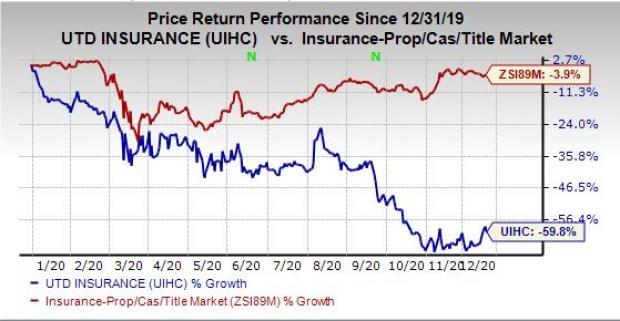 Alleghany’s bottom line surpassed estimates in two of the last four quarters, the average beat being 34.08%.

Fidelity National Financial surpassed earnings estimates in each of the last four quarters, with the average being 30.48%.

First American Financial surpassed estimates in three of the last four quarters, the average beat being 16.83%.

These Stocks Are Poised to Soar Past the Pandemic

The COVID-19 outbreak has shifted consumer behavior dramatically, and a handful of high-tech companies have stepped up to keep America running. Right now, investors in these companies have a shot at serious profits. For example, Zoom jumped 108.5% in less than 4 months while most other stocks were sinking.

Our research shows that 5 cutting-edge stocks could skyrocket from the exponential increase in demand for “stay at home” technologies. This could be one of the biggest buying opportunities of this decade, especially for those who get in early.