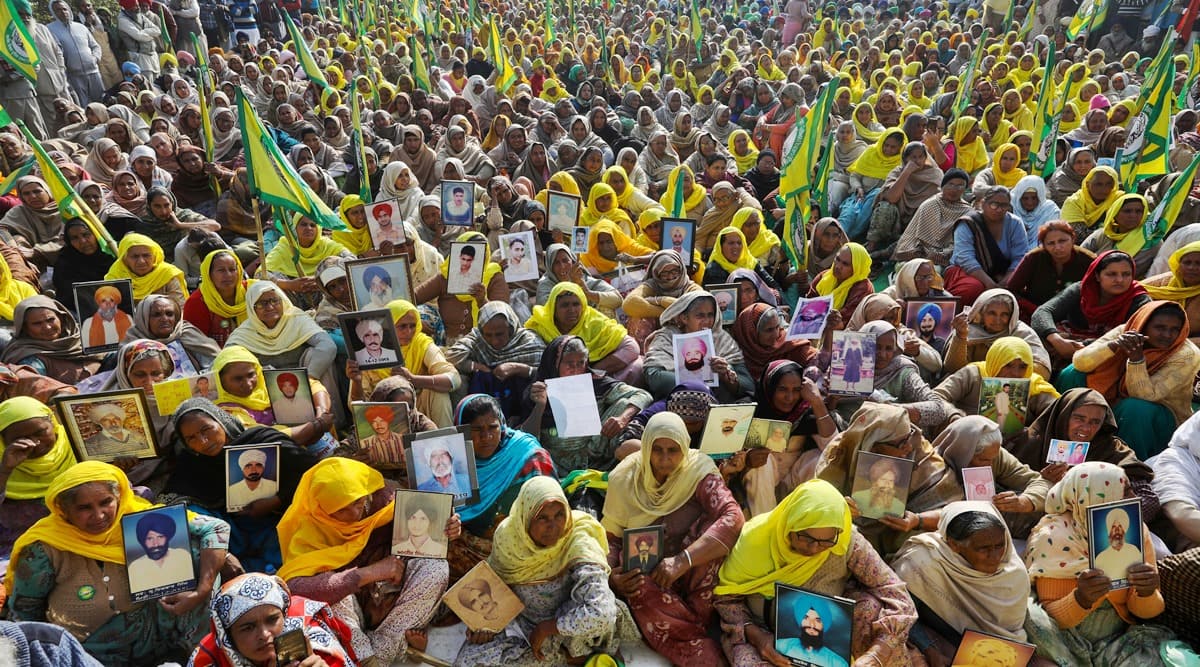 Women, including widows and relatives of farmers who were believed to have killed themselves over debt attend a protest against farm bills, at Tikri border near Delhi. (Reuters)

Even as the Supreme Court indicated that it may constitute a panel having representatives of the government and farmer unions to end the deadlock over the controversial agriculture laws, Union Agriculture Minister Narendra Singh Tomar Wednesday said that the ongoing protest at Delhi borders was an “exception” and “limited to one state”.

“The ongoing protest is an exception and the agitation is limited to one state. We are holding discussions and talks. I believe there will be an early solution,” Tomar said while addressing a virtual conference organised by industry body Assocham.

Tomar also noted that while there is an agitation going on on one side, there are also lakhs of farmers coming in support of these laws. He highlighted the measures taken by the Narendra Modi-led central government in the last six years to boost farmers’ income and make agriculture sector profitable.

Tomar is currently leading the negotiation with about 40 farmer unions along with Food Minister Piyush Goyal and Minister of State for Commerce Som Parkash. The ongoing protests, which is now in its third week, have seen thousands of farmers, primarily from Punjab and Haryana, gathering at the capital’s doorsteps.

Several rounds of formal talks have taken place between the Centre and the representatives of protesting farmers since November last week, but the impasse has continued with the unions sticking to their main demand for a repeal of the three contentious laws and repeatedly rejecting the government’s offer to make certain changes in the legislations and give written assurances or clarifications on a few issues such as the minimum support price (MSP) and the “mandi” (wholesale market) system.

A 65-year-old man, identified as a religious leader, killed himself near the Singhu border, where farmers have been protesting for the past 20 days, on Wednesday. In a purported suicide note, Sant Baba Ram Singh said he was pained by the plight of farmers. “I am unable to bear the plight of the farmers. Tolerating a crime is as bad as causing it. Several people have made sacrifices for their cause,” said the note.

Addressing a press conference in the evening, farmer leaders at Singhu confirmed the death and extended condolences to his family.

Singh, also known as Nanaksar Singhra Wale, was known for his religious preachings. He was based in Karnal.

Pointing that the Centre’s negotiations with protesting farmers have not yielded any results, the Supreme Court said it could form a committee to work out a solution between the two sides. 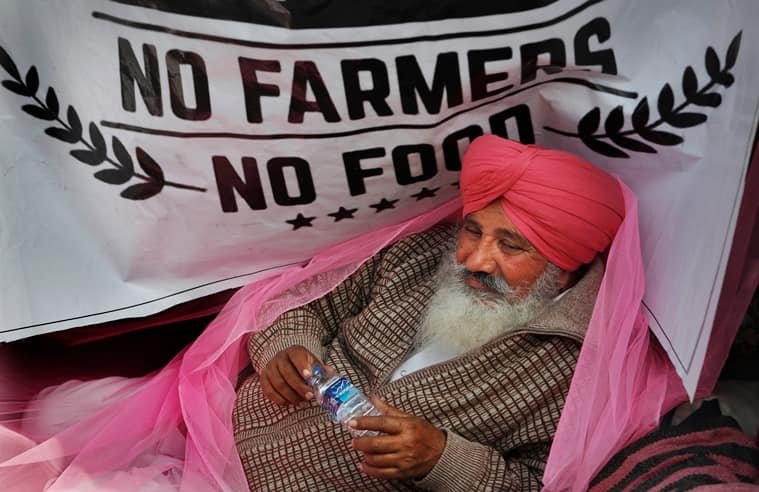 A protesting farmer sits at the back of his tractor-trailer at the Delhi- Haryana border, outskirts of New Delhi, Monday, Dec. 14, 2020. (AP)

Hearing a batch of petitions seeking removal of farmers protesting near Delhi borders, a bench of Chief Justice of India S A Bobde and Justices A S Bopanna and V Ramasubramanian issued a notice to the Centre and posted the matter for hearing on Thursday. The court said the proposed committee would comprise of representatives from the government and farmer unions across the country to resolve the deadlock over the farm laws.

Reacting to this, protesting farmer unions said constituting a new panel to break the stalemate is not a solution as they want a complete withdrawal of the legislations. They also said the government should have formed a committee of farmers and others before the laws were enacted by Parliament. A makeshift salon for farmers at the Singhu border, New Delhi.

Abhimanyu Kohar, a leader of the Rashtriya Kisan Mazdoor Sabha which is one of 40 protesting farmer unions, said they have already rejected a recent government offer to form such a panel. “Setting up a new committee by the court is not a solution. We just want a complete repeal of the three agriculture laws. Earlier, there have been several rounds of talks between a group of Central ministers and farmer unions, which was like a committee itself,” Kohar was quoted as saying by news agency PTI.

Taking to Twitter, Swaraj India leader Yogendra Yadav, who is also a member ‘Sankyukt Kisan Morcha’, said, “The SC can and must decide on the constitutionality of the 3 farm acts. But it is not for the judiciary to decide on the feasibility and desirability of these laws. That’s between the farmers and their elected leaders. SC monitored negotiation would be a wrong path.”

In a letter to Centre, an umbrella body of 40 farmer unions protesting against the new agriculture laws urged the govt to stop holding “parallel talks” with other farmer bodies. A farmer during a protest against the new farm laws, at Singhu Border in New Delhi, Wednesday, Dec. 16, 2020. (PTI)

The letter, by ‘Sanyukt Kisan Morcha’, which represents farmer bodies mostly from Punjab, comes against the backdrop of the government holding talks with several farmers organisations from different states who the Centre claimed have extended their support to the new agriculture laws.

Addressed to Union Agriculture and Farmers’ Welfare Joint Secretary Vivek Aggarwal, the Morcha, in the letter said that Centre should also stop “defaming” the ongoing protests being held at several Delhi border points against the three farm laws, PTI reported.

“We want the government to stop defaming farmers’ agitation and holding parallel talks with other farmers’ organisations,” said Darshan Pal, a member of the ‘Sankyukt Kisan Morcha’, in his letter written in Hindi.

Pal, in the letter, also recorded in writing the farmer unions’ decision to reject a recent government proposal of amendments in the new laws.

Union minister Dharmendra Pradhan alleged that an anti-Indian and feudalistic force was behind the ongoing farmers’ agitation against the new agricultural laws. He said that this force was also against the concepts of ‘Bharatiyata’ (Indianness) and India’s self-reliance. “There is a force in the country which is basically anti-India and feudalistic. The people associated with this force are also against Indianness and the country’s self-reliance. This force is behind the farmers’ agitation,” Pradhan was quoted as saying by PTI.

“Who stood with China against its invasion (on India)? Who imposed the Emergency in India? Who ran nepotism in the country between 2004 and 2014? Those involved in these works are now engaged in instigating the farmers’ agitation,” he alleged.

Further raising questions about the farmers’ protest, Pradhan said that Agriculture Minister (Narendra Tomar) has agreed to give a written guarantee that the system of procurement of crops at the minimum support price (MSP) will continue in the country. “Then on what issue the farmers’ agitation is happening?” he remarked.

Raab on Wednesday said that he has “discussed” the situation arising out of the farmers’ protests with Jaishankar and underlined that “your politics” is, in some sense, “our politics” because of the Indian diaspora in Britain. In an interaction with select Indian journalists in New Delhi after meeting Prime Minister Narendra Modi, Raab, however, said that India has a “vibrant heritage of peaceful protests”, the UK “respects it”.

Raab, who is on a visit to India ahead of British Prime Minister Boris Johnson’s visit as the chief guest at the Republic Day celebrations in January, said, “ I discussed the situation with Foreign minister Jaishankar and obviously, we respect the fact that the reforms going through your system here are domestic reforms. Of course, they have elicited the protests that you refer to, and your politics – in some sense – because of the Indian diaspora in Britain, is our politics. But I think, India, as well as having a market-driven economy also has a vibrant heritage of peaceful protests and vigorous debate, and we watch that with interest and we respect it.”

On Wednesday, one side of the Delhi-Noida Link Road was closed for commuters due to the ongoing protest by farmers at the Chilla border in New Delhi. 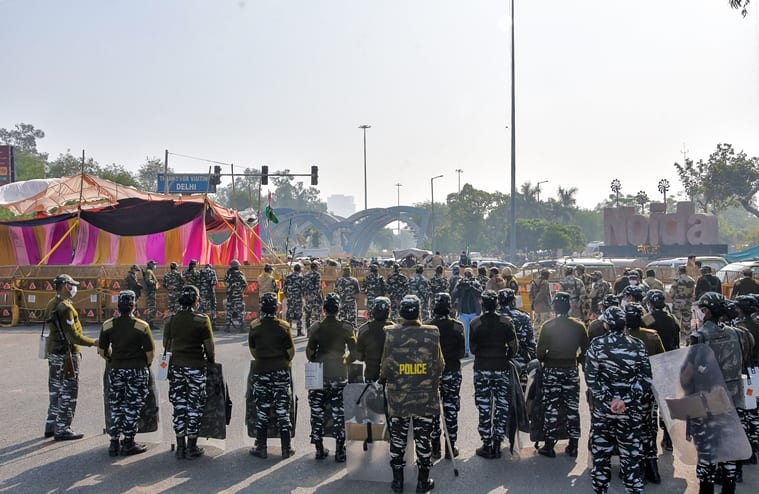 Barricades were set up on the road, prohibiting vehicular movement from Noida to Delhi, while the other side (Delhi to Noida) was open, Noida Traffic Police officials said.

Traffic was also diverted from the Dalit Prerna Sthal, another site of the farmers’ protests, to the Delhi-Noida-Direct (DND) flyway in the wake of the situation at the Chilla border.

As per PTI, the Chilla route had remained obstructed since December 1 when the protest started. One side of the road (Noida to Delhi) had remained closed during a large part of the period until December 12, when protesters agreed to open it for the sake of commuters but stayed put at the border.