An iconic actor and style icon, Smita Patil, had breathed her last at the age of only 31 reportedly because of childbirth complications and today is her 34
th death anniversary. While many Bollywood stars including Smita’s husband Raj Babbar and son Prateik Babbar took to their social media handles to pay their tribute to the late actress, Ayushmann Khurrana’s tributary post is something unique. 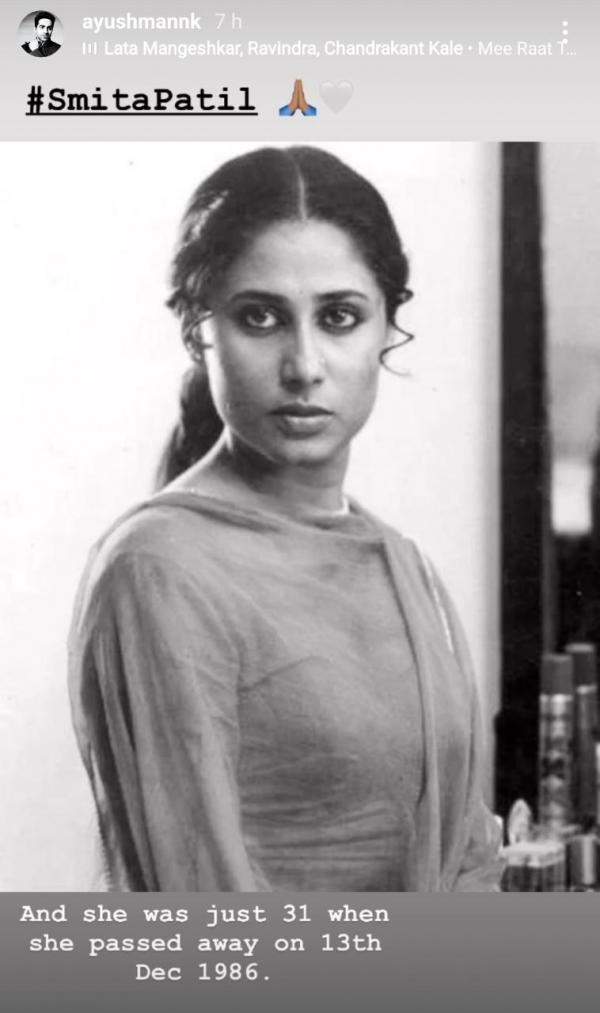 The popular actor paid his homage by sharing a classic black and white picture of Smita Patil. He wrote, “And she was just 31 when she passed away on 13th Dec 1986.” What’s interesting is while sharing the photo on his Instagram story, Ayushmann chose an evergreen song from one of Smita’s Marathi movies ‘Jait Re Jait’. The song ‘Mee Raat Taakli, Me Kaat Taakl’, a soulful rendition from Lata Mangeshkar, Ravindra Sathe and Chandrakant Kale, is still regarded as a golden hit among Marathi film songs.
Earlier, veteran actor Raj Babbar remembered his late wife with a heartfelt note. He took to his Instagram handle to share a picture of Smita and captioned it: “You were just 31 when you left us. The short pathway of memories you walked, left so many indelible impressions that your absence isn’t easy to believe. You saw so little & yet had so much to showcase. Your hasty retreat from our lives would always remain unexplained,” he added.

Born in Pune on October 17, 1955, Smita Patil’s Bollywood journey was just 10 years old and she starred in 80 films. Despite such a short career, the actress had left such an impression with her natural acting that even today those are acting lessons to any newcomer.