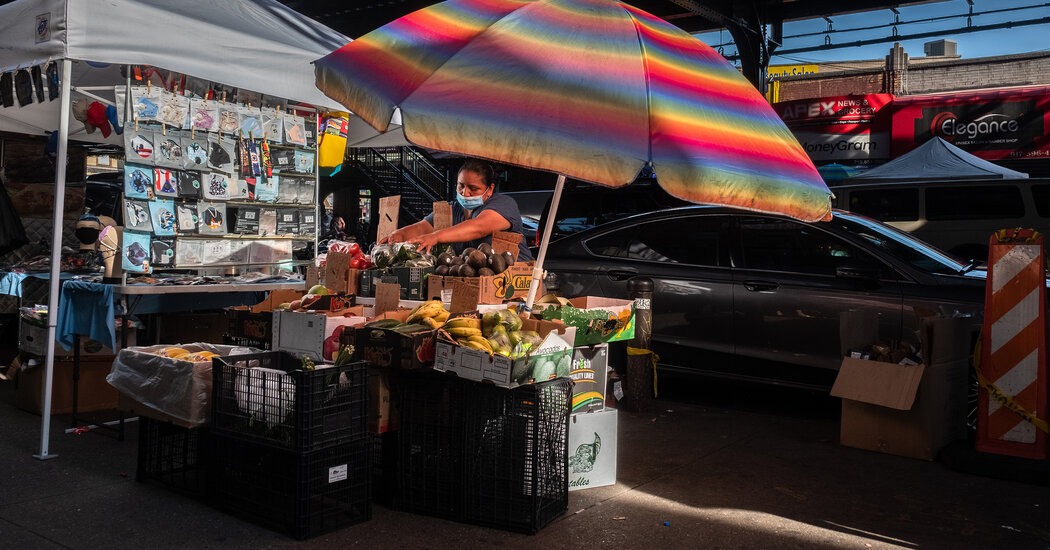 Featured Article: “No Papers, No Jobs: The New Street Vendors of Queens” by Juan Arredondo and David Gonzalez (also available in Spanish)

Make the Road New York, an immigrant advocacy group, says that more than 60 percent of its members lost their jobs and at least 50 members have died since the coronavirus pandemic started. This is the climate that many Latino immigrants are navigating: a pandemic that is twice as deadly for Latinos as for white people and a lack of work opportunities. Some immigrants — particularly those who are undocumented — have started working as street vendors in an attempt to make ends meet and to support their families back home.

In this lesson, you will see these New Yorkers in their daily lives and hear their stories. Then you will make past-to-present connections as you compare the experiences of street vendors in New York City today with those from a hundred years ago.

Where do you — or your family members — buy most of your groceries? Do you ever shop for fruits or vegetables at a stall on the street or at a local farmers market?

The featured article shares the stories of immigrants who work as street vendors in New York City and the difficulties they face during the pandemic. However, there is a long history of immigrant-run street markets in New York and other cities.

Compare the two photographs below: The first image is from 1923 and the second is from 2020. As you look closely, respond to questions adapted from our What’s Going On in This Picture feature:

1. What are some of the ways the pandemic has affected Cristina Sanchez and the other people profiled in the article?

2. How have undocumented immigrants been uniquely affected by the pandemic?

3. What does it mean that Jackson Heights was part of the “epicenter of the epicenter” of the pandemic in New York? Use examples from the article to explain what that means.

4. Alyshia Gálvez, a professor and founding director of the Mexican Studies Institute at Lehman College, said, “This is the kind of creative resiliency that immigrant communities have always engaged in.” What are some examples of this “creative resiliency” in the article?

5. What are the goals of the Street Vendor Project? How might its efforts, and other similar initiatives, help someone like Sabina Morales, a veteran street vendor?

6. How have the New York City government and the Police Department made it difficult for street vendors to operate their businesses?

The featured article relies heavily on photographs, videos and the words of the interviewees to tell the story. Reflect on what you read, how it made you feel and what you are left thinking about by creating a one-pager.

You can start by using this worksheet and including a photograph from the article (or a drawing), a quotation that you found particularly meaningful and one question you are left with after reading the article.

If you would like to expand on your one-pager or prefer to do a free-form artistic interpretation, you can start on a blank sheet of paper and add these elements:

Once you have created your one-pager, you can go on a gallery walk in person or virtually by spending about one minute with each one-pager in your class and writing down what you notice and wonder about the creation. After that, you can debrief as a class about recurring themes you noticed and elements of different one-pagers that you found particularly effective.

You started this lesson by looking at two photographs: one from 1923, which featured a predominantly Eastern and Southern European immigrant neighborhood, and the other from the featured article in 2020. You compared what was visually similar and different between the photographs. Now consider what might be similar or different about experiences working as a street vendor across history and attitudes that the city had toward street vendors.

Declaring that pushcart peddlers are a menace to traffic, health and sanitation, Mayor La Guardia yesterday appealed to civic organizations to join a drive to eliminate them from the streets. He said he had asked the City Council to give prompt consideration to the problems created by the “6,000 peddlers roaming the streets without licenses.”

The article continues with an excerpt from Mayor La Guardia’s letter to several merchant and commerce organizations:

“The open pushcart market is not only antiquated and unnecessary, but also, in many instances, unsanitary. In almost every instance these peddlers are a danger to themselves and to others by creating traffic congestion. It is my policy, where a market is necessary, to build a proper covered market so that these same peddlers may be permanently placed in such market under proper and wholesome sanitary conditions. … ”

After reading the excerpts, respond in discussion or in writing to the following reflection questions:

If you want to learn more, The Times cataloged articles from the archive about street vendors in this 2014 article, “New York City vs. Street Peddlers, a Brief History.” It starts with an article from 1903, “War on Fish Peddlers,” and ends with a 2004 article about new laws to regulate street vendors. You can create a timeline and observe how attitudes changed and remained the same over time.

• Find all our Lessons of the Day in this column.
• Teachers, watch our on-demand webinar to learn how to use this feature in your classroom.’