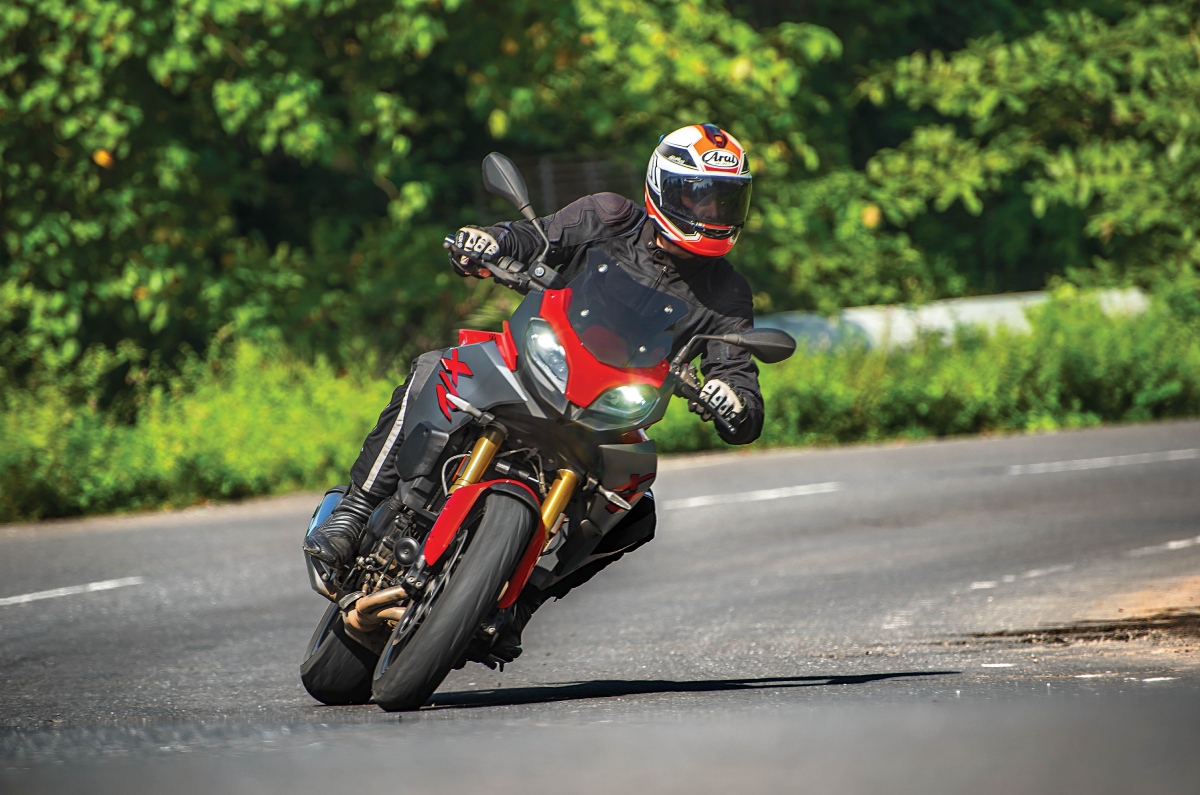 It’s often at the end of a long day on the road, when a motorcycle truly reveals its character. That was exactly the case, as the 14-hour, 320km day of riding and shooting with the BMW F 900 XR drew to a close. But let’s begin with the fresh, early morning start, at 6am, where I had my first interaction with this motorcycle, on home soil. 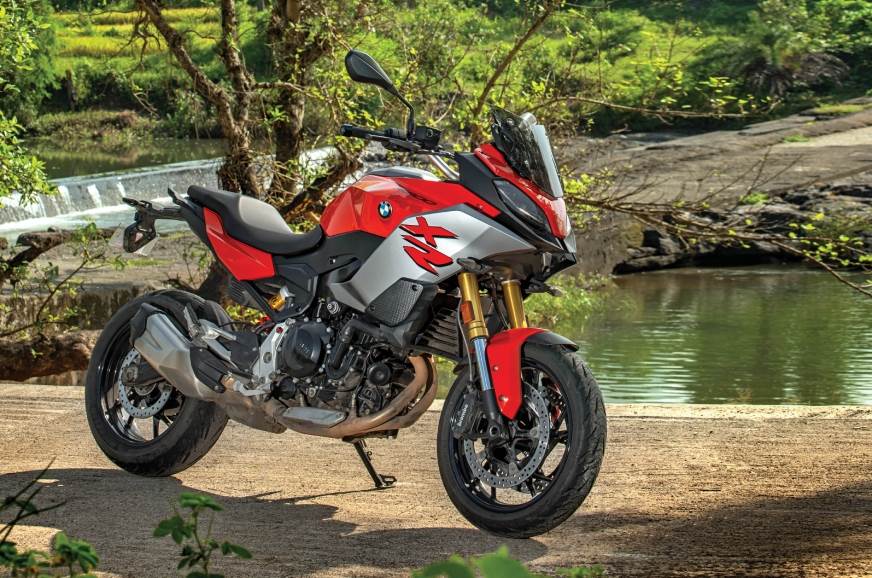 Having already ridden it in Spain, earlier this year, I knew what to expect while wheeling this tall, 219kg motorcycle, out of the society to start up the engine – no one likes being disturbed by loud noises at 5:55am! Speaking of, with its 270-degree crank, this parallel-twin sounds deep, but it’s hardly what you’d call boisterous or excessive, BMW simply doesn’t make bikes like that. While I waited for it to warm up, a quick glance over reconfirmed my liking for this sharp and angular design, as well as the overall quality levels.

With some heat in the motor, we gently roll out through the narrow lanes of my locality and it immediately becomes clear that this motor is very different from the one in the 790 Duke. Both make 105hp, but the BMW’s is far more mellow and calm, especially at low speeds. Clearly, BMW has placed ease of riding near the top of its to-do list, with the new 900cc parallel-twins. 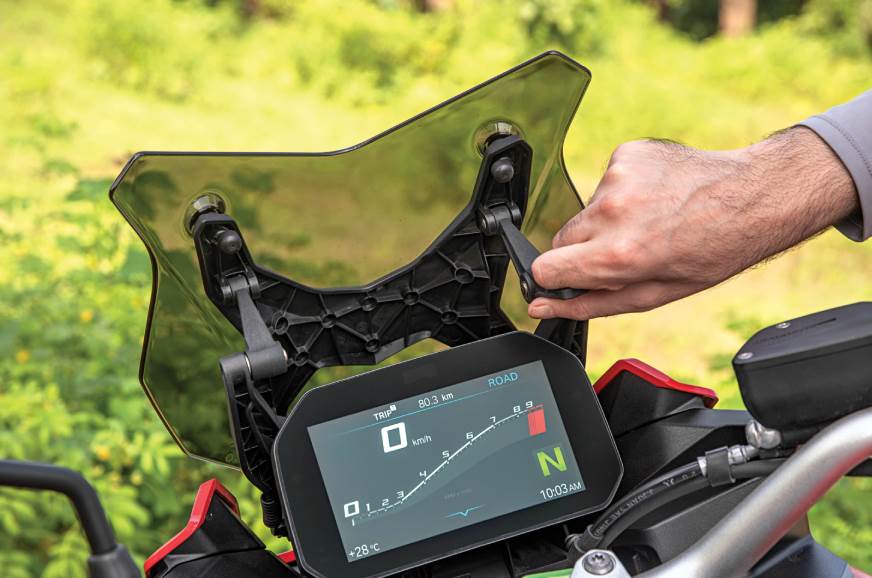 Soon, the roads opened up and we hopped onto the fast, but bumpy western express highway that leads out of Mumbai. The XR was in its element, while I was seated nice and upright with a commanding line of sight over the traffic. BMW has taken some flak for the non-adjustable front suspension on its 900s, but just like before, I think the setup is just fine and quite well-damped.

Same goes for the rear, which is a more advanced, electronically adjustable unit on the Pro variant of the F 900 XR that we’re riding. There’s no standard compression or rebound setting, but you can select between Comfort and Dynamic modes, and also setup the preload for the additional weight of a passenger or luggage – very convenient, that. 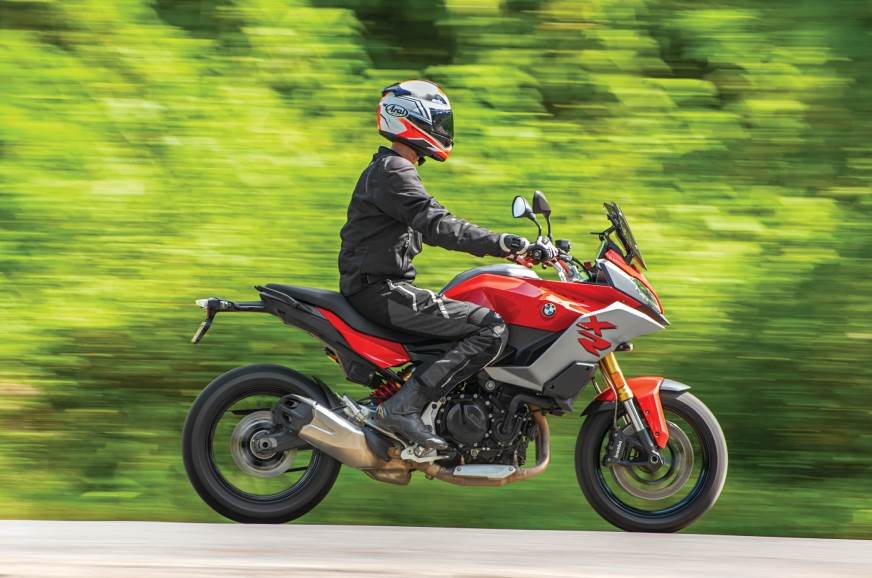 As the city opens up to the suburbs, we make a quick stop for some fuel. With a long day ahead, it makes sense to start with a full tank of gas, especially since there’s no ADV-bike sized fuel tank here and you’ll have to manage with 15.5-litres. With the chaos left behind, the smooth six-lane highway tempts and the right wrist relents. Triple-digit speeds arrive in mere seconds and the barrel-chested mid-range above 4,500rpm is enjoyable to surf. And yet, something feels off… this bike should be faster! 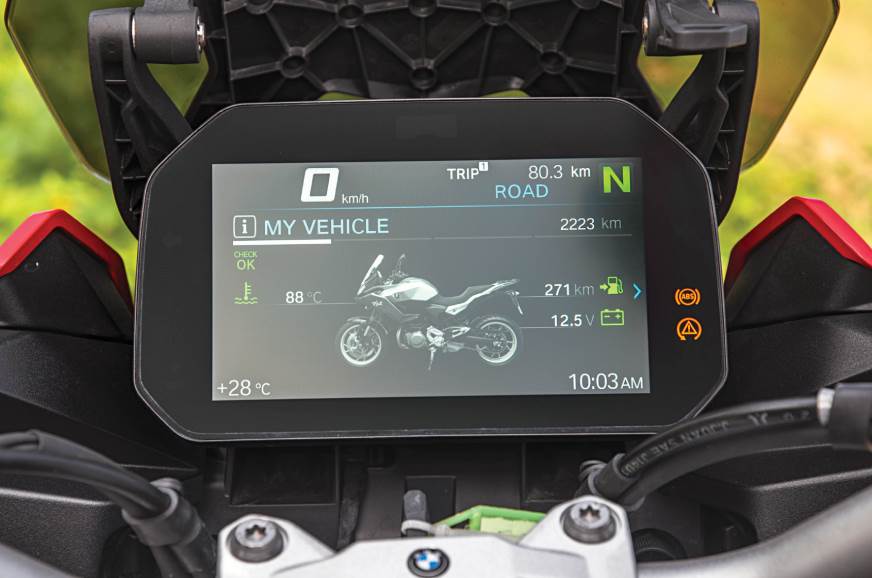 TFT dash is one of the best in the segment.

It takes a few minutes to figure out that quite a bit of the acceleration is saved for the last few millimetres of the throttle action. Only when you excessively twist the throttle and hold it against the stop will you feel the full pull of those 105 horses. I don’t recall this from the international ride and it’s probably because those bikes were equipped with BMW’s Pro Riding Modes, which include Dynamic and Dynamic Pro modes. In India, you only get Rain and Road modes as standard, and you’ll have to pay an extra Rs 30,000 for the Pro Mode package. We suggest you do so because this also brings in much improved electronic assists, including cornering sensitivity for the traction control and ABS systems, as well as motor slip regulation and dynamic brake control. That last feature detects when the rider is in an emergency braking situation and maximises braking force at the rear while preventing accidental opening of the accelerator. 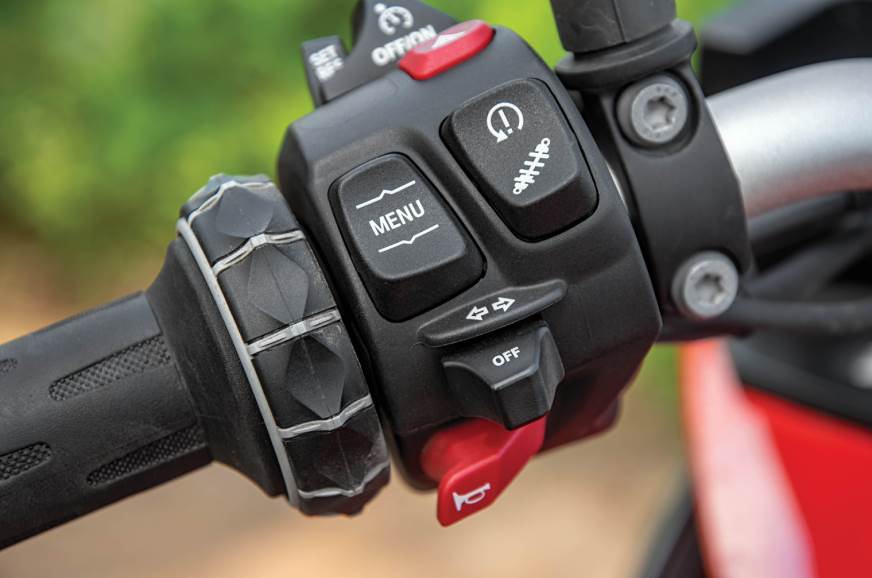 BMW switches take getting used to.

Eventually, it was time to turn off the highway and hit some flowing country roads. With its 17-inch wheels and sport-touring, Michelin Road 5 GT tyres, the XR never shies away from corners and it held its own quite well, even with the rear shock set to Comfort. There’s plenty of power to shorten the gaps between bends and the strong, but progressive brakes will keep you on the smooth black stuff. This is a tall bike, but it leans over quite happily and you will only find the lean angle limits of the foot pegs in rather high-speed corners – something we never experienced on the day. Switching the rear shock to Dynamic mode improved things by a small margin, but once the road straightened out again, Comfort mode was back on duty to handle the typical rough and bumpy surfaces on India’s back roads. 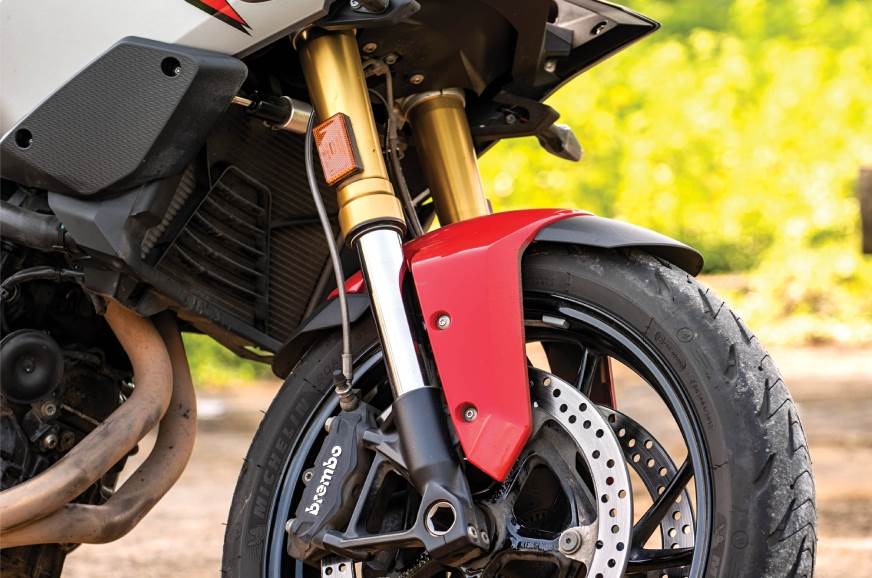 The 43mm USD fork is non-adjustable.

As for ride comfort, the XR is very good, but only when measured by sports bike standards. While it’s quite plush, it’s nowhere close to as absorptive as a proper ADV bike, and you would’nt want to recklessly blast through broken stretches as you would on an 850 GS or a Tiger 900. While its tall stance might suggest otherwise, think of the XR as a comfy road bike with decent ground clearance and suspension travel, because this is not an adventure motorcycle. 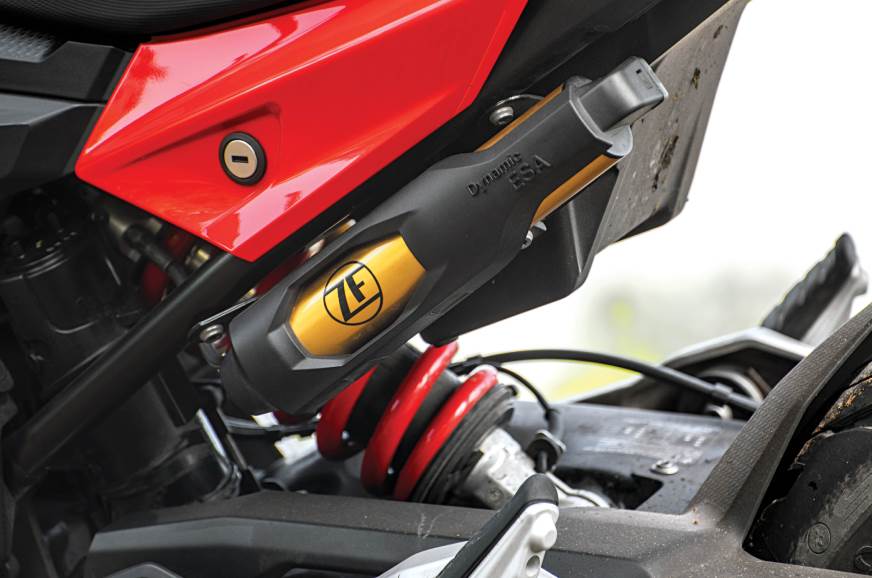 Many hours have since been consumed by our shoot and with the sun well on its way to greet the other side of the world, my 160km ride home has commenced. At this point in the day, I’m usually exhausted and craving the simple joys of a hot shower, food and the bed. The more comfortable the bike, the happier I am and the XR certainly delivers in some areas. The riding position is kind, the headlamps are decent, the easily adjustable windscreen blocks a fair amount of wind. Having cruise control is a nice feature for the open highway, too. As we merged with Mumbai’s horrendous evening traffic jams, I also find that the clutch isn’t too heavy and the bike doesn’t get nasty hot either.

But it’s not all perfect. One feature I’m not enjoying is the up/down quickshifter that is standard on the Pro variant. As with most BMWs (aside from the S 1000 RR), it feels clunky in the lower gears and only really works smoothly at full-bore upshifts. The rest of the time it’s heavy to use and remains the least impressive system I’ve experienced on a big bike. 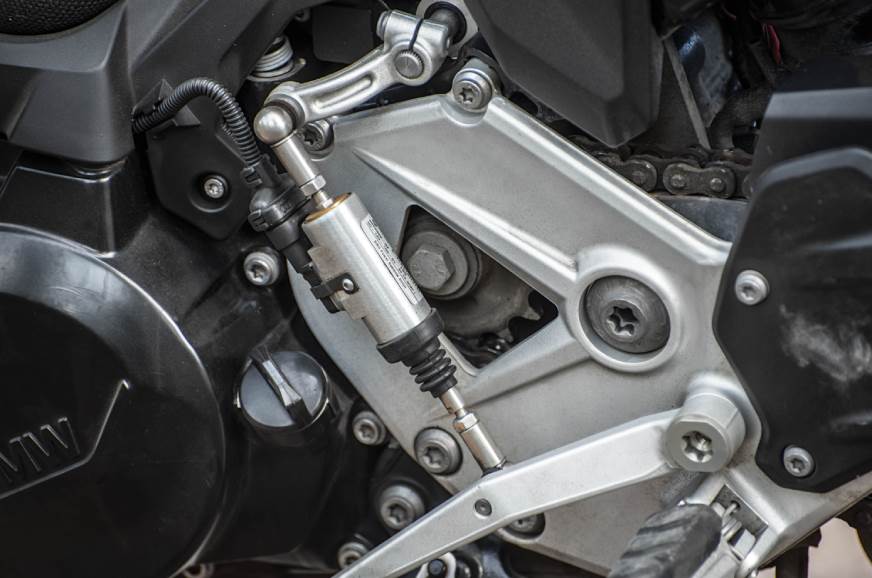 Most of all though, I’m having a hard time getting along with the seat. This scooped out single-piece unit is shared with the F 900 R naked bike, and it works just fine there, but the XR deserves more. At this stage in the day, I feel that it locks me into place and I’m craving for more room as well as better support. The pillion seat isn’t very large either, and unlike the bigger S 1000 XR that this bike is inspired by, the seats aren’t up to the demands of comfortable long-distance travel. 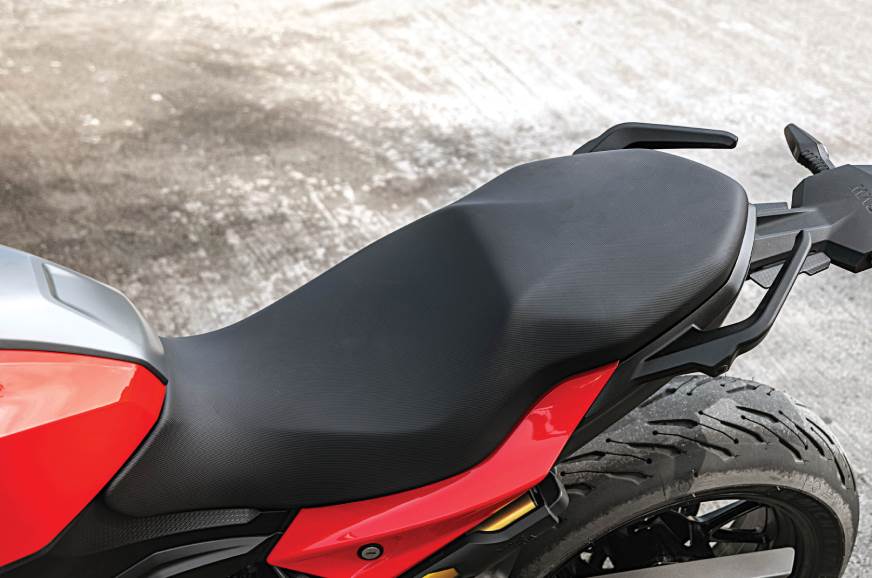 As we dredge through the final few miles home, I find myself pondering on what is undoubtedly a nice motorcycle, but one that’s a little confused in its identity. At one end it doesn’t have a very sporty demeanour, and yet on the other side, it’s not as comfy a tourer I’d have liked it to be. On the upside, it’s easy to ride, has impeccable brand value, and is also priced well for a BMW. But if you were to ask me why the lower-priced Kawasaki Ninja 1000 SX that we recently reviewed (or the Versys 1000) isn’t a better sport-tourer, I’d struggle to give you an answer. 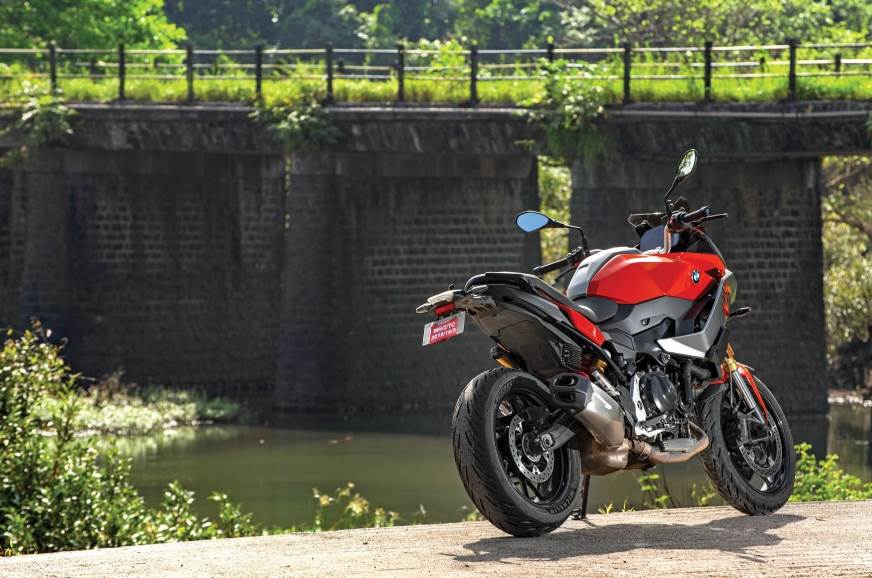