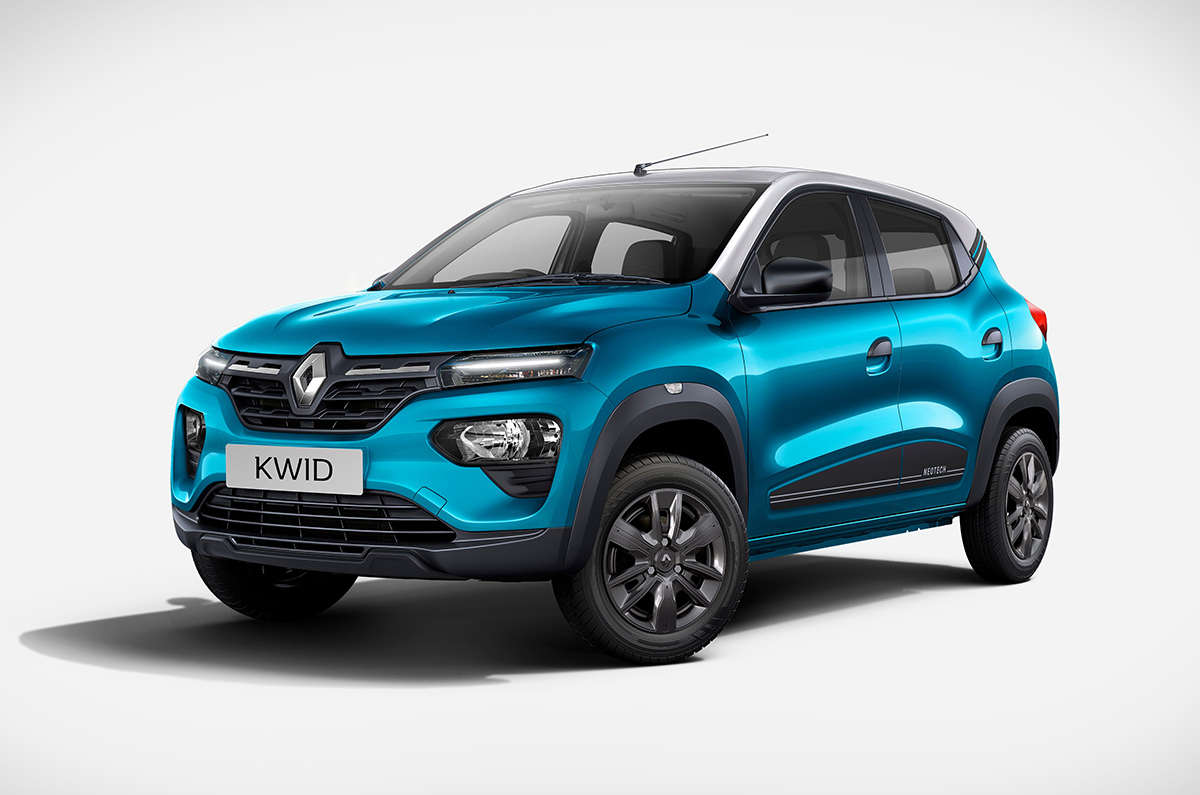 The special edition Renault Kwid Neotech has been launched, with prices starting from Rs 4.30 lakh. With the addition of this new trim, the Kwid is now the only car in the segment to get a dual-tone exterior finish. The Kiwd Neotech is available with the same 0.8-litre and 1.0-litre engine options as the other variants.

The Kwid Neotech costs about Rs 30,000 more than the Kwid RxL regardless of whether it’s specced with the 0.8-litre or 1.0-litre engine. While the 0.8L Kwid Neotech sits at par with the Kwid 0.8 RxT, priced at priced at Rs 4.30 lakh, the larger 1.0-litre Neotech variants are about Rs 8,000 less than the Kwid 1.0 RXT (O) versions, coming in at Rs 4.53 lakh for the manual and Rs 4.84 lakh for the AMT. The carmaker dropped the Kwid RxT variant for the 1.0-litre model when it rejigged the Kwid’s line-up back in July.

Compared to the standard Kwid, the Neotech edition gets two new dual-tone exterior finishes – Zanskar Blue with a Silver roof and vice versa. Other unique design touches include grey wheel covers, Neotech graphics on the side body moulding, and decals on the C-pillar.

Inside, the Kwid Neotech gets highlights and fabric inserts in the Zanskar blue shade.

Moving to the equipment, when compared to the RxL trim, additions to the Kwid Neotech include an 8.0-inch touchscreen with Android Auto and Apple CarPlay, which is also offered in higher variants of the hatchback. However unlike the higher-spec Kwid RxT, this special edition model misses out on kit such as a rear view camera and a USB fast charger.

As with the standard Kwid, a driver airbag, ABS, rear parking sensors and front seat belt reminders are also available on the Neotech.

The Kwid Neotech is available with both, the 54hp, 0.8-litre engine and the larger and more powerful 68hp, 1.0-litre petrol unit. Both engines are offered with a 5-speed manual gearbox, though the larger 1.0-litre unit is also offered with an AMT option.

Rivals to the Renault Kwid include the Datsun Redigo,the popular Maruti Alto and the Maruti S-Presso.

Renault Kwid gets dual airbags on all variants

SEO News You Can Use: Continuous Scrolling Is Live on Mobile Search Results

The St. Tropez Glow Kit Made Me Feel Like I’m Actually Good at Applying Self-Tanner